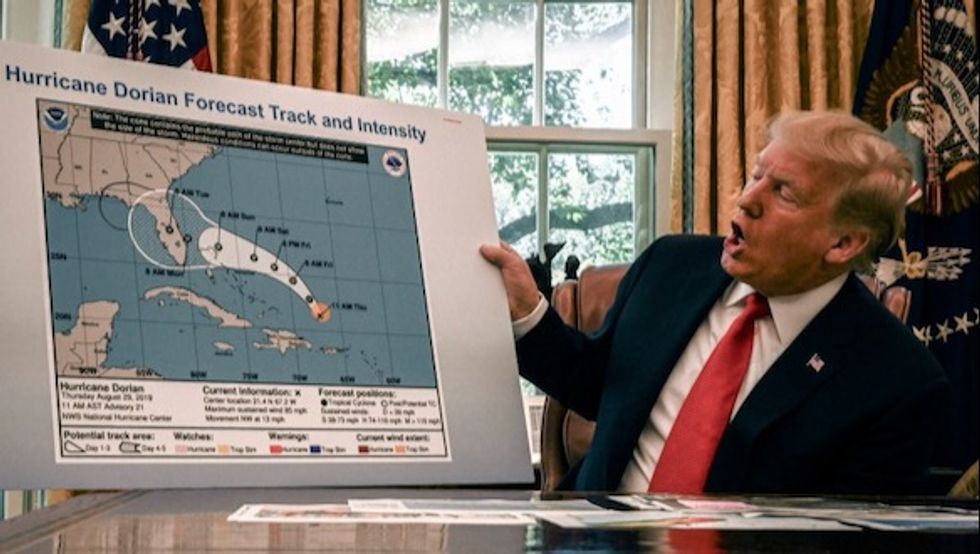 President Donald Trump brandishes a graphic during an Oval Office briefing on the status of Hurricane Dorian in Washington, D.C. on September 4, 2019. (Photo: Bill O'Leary/The Washington Post via Getty Images)

Interference in government research by US President Donald Trump's administration has reached a "crisis point" with almost weekly violations of previously respected safeguards, a report by a think tank said Thursday, warning that ignoring science has led to ineffective and costly policy.

From pressuring a top meteorologist to support Trump's false assertion about a hurricane's trajectory to relocating economists across the country after they said White House trade policy was harming farmers, the executive branch is undermining long-held principles of non-interference, the report by the Brennan Center said.

"Political officials have the prerogative to make policy decisions, and even challenge the science and methodology of career experts, but accurate, nonpolitical, government-supported research and analysis should be protected," it said.

Led by former US attorney Preet Bharara and Christine Todd Whitman, head of the Environmental Protection Agency under George W Bush, the report urged more checks to uphold scientific integrity and to make it harder for presidents to sideline Congress by allowing "acting" officials to lead departments on a long-term basis.

The authors wrote the principles of apolitical and unbiased government research, which had "shifted the course of human history" through the space race, cures for disease, and innovations like the internet, had come under increasing threat by recent administrations.

Under Trump, though, the interference has reached new heights, the report said, warning that the trend risked creating a vicious cycle by paving the way for future administrations to push the envelope even further.

In 2018, Labor Department officials ordered career researchers to revise a study showing the negative effects of allowing restaurant managers to take tips from the tip pools of workers, eventually excluding the analysis because it did not support their political objective.

Man-made climate change is a particularly sensitive topic, despite the overwhelming scientific consensus that it is real and must be addressed urgently.

EPA officials recently blocked agency scientists from presenting their research on the topic at a professional conference, and "an employee at the National Parks Service reports being instructed to avoid using terms such as 'climate change' in internal project proposals," the report said.