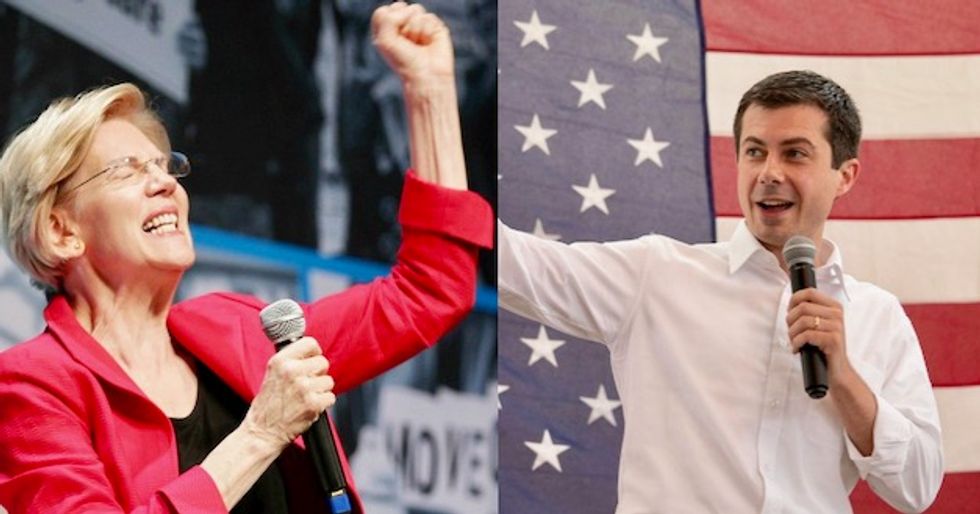 "Activists and organizers have made enormous strides toward equality—but that hard-won progress is already under attack. We need a president who is ready to fight back."

"No matter what happens at the Supreme Court, we need a president who will lift up the voices of every LGBTQ+ person, stand up to discrimination, and fight back. And as president, I will fight shoulder to shoulder with them."

Warren, the Massachusetts Democrat who became her party's new frontrunner in the presidential primary on Tuesday, and Buttigieg are among nine 2020 candidates scheduled to participate in the town hall hosted by CNN and the Human Rights Campaign Foundation.

In Warren's announcement of her new plan, she noted that President Donald Trump has appointed two right-wing justices to the U.S. Supreme Court, Brett Kavanaugh and Neil Gorsuch, who "could set LGBTQ+ rights back by years" with their forthcoming decisions on three discrimination cases for which the court heard arguments on Tuesday.

"The stakes are high, and people are scared," Warren said. "No matter what happens at the Supreme Court, we need a president who will lift up the voices of every LGBTQ+ person, stand up to discrimination, and fight back. And as president, I will fight shoulder to shoulder with them—because no one should ever be unsafe, unheard, or disempowered because of who they are or who they love."

"In my first 100 days as president, I will use every legal tool we have to make sure that LGBTQ+ people can live free from discrimination," Warren vowed. Her administration would, among other things, restore Obama-era nondiscrimination protections gutted by Trump, revamp overly broad religious exemption policies, limit Title IX waivers that allow higher education institutions to suspend LGBTQ+ students, prohibit discrimination against sexual orientation and gender identity in adoption agencies and the child welfare system, and institute a nationwide ban on "conversion therapy."

As president, Warren would boost funding for training law enforcement on implicit bias, the investigations of police departments by the Justice Department's Office of Civil Rights, and federal HIV/AIDS programs and research. Beyond U.S. borders, she said, "I will also continue to push for robust funding for the President's Emergency Plan for AIDS Relief (PEPFAR), which funds vital services for individuals living with HIV/AIDs abroad, and repeal the Trump administration's heartless Global Gag Rule."

"As president, I will use my story, our energy, and the power of the presidency to tear down the walls that have excluded far too many LGBTQ+ people for far too long."

Part of Warren's plan includes working with Congress to pass legislation such as Medicare for All, which she described as "the first step toward eliminating LGBTQ+ health disparities." Warren also promised to fight to pass the Equality Act, which would amend the Civil Rights Act and other federal laws to better protect LGBTQ people from discrimination. The bill was approved by the Democrat-controlled U.S. House in May but is currently stalled in the Senate, where Republicans hold a majority of seats.

Buttigieg, as part of his LGBTQ rights platform, also promised Thursday to fight for the Equality Act, ban conversion therapy, review federal religious exemption policies, and enact policies to ensure LGBTQ people receive gender-affirming healthcare. The mayor set a goal of ending the HIV/AIDS epidemic by 2030. Parts of his plan focus on young people, such as his proposed national mentorship program for LGBTQ youth and promise to work with Congress to pass the LGBTQ+ Suicide Prevention Act.

I will use my story, our energy, and the power of the presidency to tear down the walls that have excluded far too… https://t.co/ComNTDov15
— Pete Buttigieg (@Pete Buttigieg)1570704583.0

"Across much of our country, discrimination and the ever-present fear of it continue to govern aspects of LGBTQ+ people's lives," Buttigieg said Thursday. "Which bathroom can I use safely? Can I kiss my partner at this restaurant? Should I hold their hand in public? Will I be able to raise a family? Will I be harassed at school? Can I live here and be happy? Will I ever be accepted?"

"When I'm president, I hope these questions will no longer haunt us," he added. "As president, I will use my story, our energy, and the power of the presidency to tear down the walls that have excluded far too many LGBTQ+ people for far too long."

"His lived experience as an LGBTQ person—as well as the experiences and struggles of LGBTQ friends and people he meets on the campaign trail—clearly informed and strengthened this plan for our community," Parker said. "It addresses complex issues that are rarely discussed by national politicians but deeply affect the everyday lives of millions of LGBTQ Americans. This proposal will be the high standard that other Democratic presidential candidates will be compared to."

About half of the Democrats seeking the party's nomination for the 2020 race will get the opportunity to share with a national audience how they will tackle LGBTQ issues if elected president in the Thursday night town hall.

Citing scheduling conflicts, Rep. Tulsi Gabbard (D-Hawaii) and businessman Andrew Yang both declined invitations to the town hall, according to CNN. Sen. Bernie Sanders (I-Vt.) had accepted an invitation but then canceled all campaign events after he had a minor heart attack last week. In a statement Thursday, Sanders thanked the hosts for organizing the event and said, "I wish I could be there with you in person."

"Throughout my life, I have been proud to support equal rights for the LGBTQ+ community," Sanders added. "The United States has made remarkable progress for LGBTQ+ rights in a relatively short amount of time, but there is still so much more work to be done to achieve equality. We cannot and we must not let Donald Trump and the Supreme Court take us backward on LGBTQ+ rights. We have got to move forward."