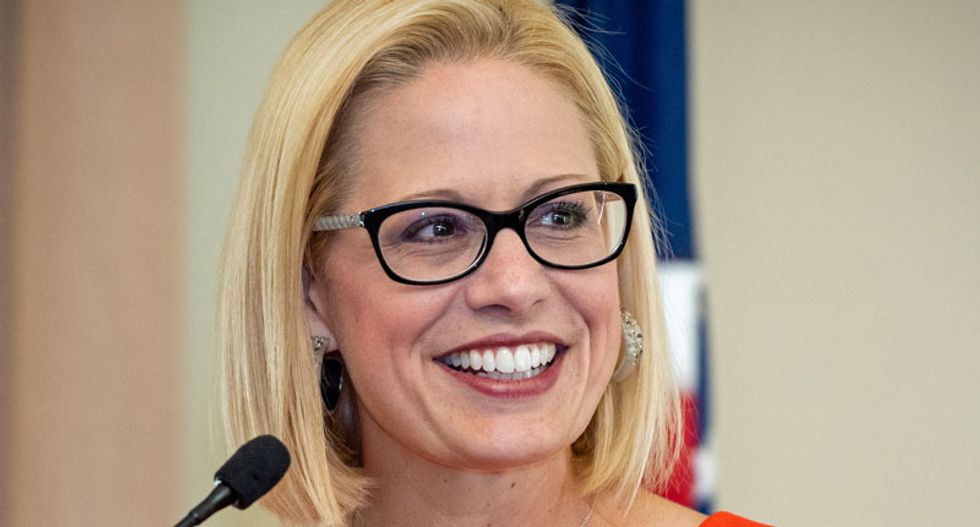 The term “swing state” was seldom used in connection with Arizona in the 1980s and 1990s. Associated with Sen. Barry Goldwater and, after that, Sen. John McCain, the southwestern state usually went Republican — and when centrist Democrat Janet Napolitano served as Arizona governor in the 2000s, she stressed her willingness to work with Arizona Republicans. But in 2019, the term “swing state” is being used more and more in connection with Arizona. And a report by Grant Smith and Júlia Ledur for Reuters offers some insights on how evolving demographics could affect Arizona in the 2020 election.

Trump defeated Democratic presidential nominee Hillary Clinton in Arizona in 2016, but only by about 3.5% — which is much closer than the double-digit wins he enjoyed in deep red states like Alabama, Mississippi, Wyoming and Idaho. Democratic strategists believe that Arizona is in play in 2020’s presidential election. Moreover, centrist Democrat Kyrsten Sinema now holds the U.S. Senate seat vacated by Republican Jeff Flake, and polls show that Arizona’s other U.S. senator, Republican Martha McSally, is vulnerable next year. None of that points to Arizona becoming deep blue like California or Massachusetts, but Reuters’ article paints a picture of Arizona as being a battleground state whether neither Republicans nor Democrats can take anything for granted.

Democrat strategists are hoping that if they can register enough Latinos in Arizona, it would give their party an advantage there. Latinos in Arizona, Smith and Ledur report, are “about twice as likely to identify as Democratic than Republican.” But the Reuters reporters quickly add that “voting registration, along with turnout and demographic data, offer no sure bet for either party” — and they note that “Hispanics are making gains in both turnout and registration, but still represent a much smaller voting bloc than white non-Hispanics.”

Stephen Nuño-Pérez, who focuses on Latino politics at Arizona, told Reuters that anti-immigrant sentiment in the Trump era is inspiring more Latinos to become politically active in that state. The professor said of Arizona Latinos, “These folks are now working on campaigns, are now staffed in the legislature. They now have more funding and more institutionalized resources on the ground.”

Arizona still has more registered Republicans than registered Democrats, but Smith and Ledur note that the gap is narrowing.

Sinema has proved to be one of the most centrist Democrats in the Senate. Sinema, in fact, has more than once exalted John McCain as her political role model, and the late senator’s daughter, conservative commentator Meghan McCain, has praised Sinema for voting with Republicans as often as she has.

Sinema was the focus of Politico’s “Nerdcast” podcast this week. In a segment that was recorded on Halloween and posted on Friday, congressional reporter Burgess Everett told host Scott Bland that Sinema’s voting record has been a source of frustration in the left wing of the Democratic Party.

Everett said of Sinema, “She’s, for a Democrat, quite conservative…. She’s very close with a ton of Republicans.” And Bland noted that Sinema voted to confirm Attorney General William Barr.

Sinema was also the focus of an article by Everett that Politico published earlier this week. Asked about the 2020 Democratic presidential field, Sinema told Politico it would be “premature” to commit to supporting the Democratic Party’s presidential nominee — whoever that turns out to be.

On “Nerdcast,” Everett told Bland, “There’s the question that if Sinema can win in Arizona, can a Democratic presidential candidate win in Arizona? (Sinema) could kind of be the guiding light there, but she doesn’t want to do it…. She just doesn’t see it as her job to sort of dictate who can win in Arizona.”