Even in the Trump era, corporate media, forever insistent on an “objective” approach that always hears out “both sides,” continue to exhibit a dangerous blindness to their own biases.

In “In Primetime, Two Versions of Impeachment for a Divided Nation” (11/16/19), the New York Times‘ Michael Grynbaum offered “a glimpse at the country’s divided political reality” by describing the contrasting ways Fox News and MSNBC are reporting on the Trump impeachment hearings: 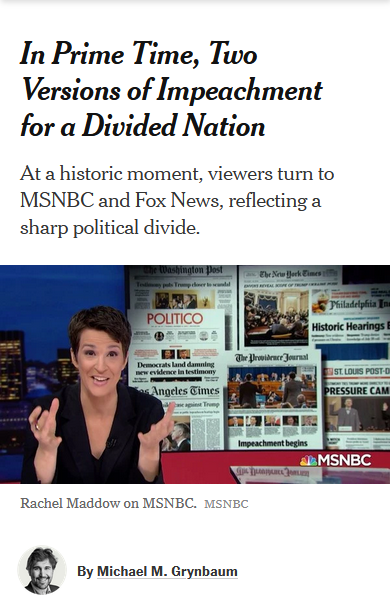 The New York Times (11/16/19) characterized Fox News and MSNBC as “opinionated outlets with irreconcilable differences”—offering no clue as to which if either might be closer to reality.

From her set inside MSNBC headquarters, Rachel Maddow opened her prime-time coverage of the Trump impeachment hearings by calling the first day’s testimony “a double-barreled problem for the president—triple-barreled, maybe.” President Trump, she said, had been “caught doing something illegal” at the “direct expense of the country’s national interest.”

One block south, from a Fox News studio, Sean Hannity welcomed viewers by declaring “a great day for the United States, for the country, for the president — and a lousy day for the corrupt, do-nothing-for-three-years, radical, extreme, socialist Democrats and their top allies known as the media mob.”

These distinct visions—delivered simultaneously from skyscrapers roughly 1,000 feet apart — were beamed at the 9 p.m. hour into millions of American living rooms. It was a striking reflection of today’s choose-your-own-news media environment, and a far cry from the era when Americans experienced major events through the same television hearth.

It’s true that both cable outlets are essentially partisan outlets pushing their own party’s line—though ideologically, MSNBC and Fox each represent the right wing of their respective parties (FAIR.org, 6/30/17), which means the television “choose-your-own-news” world is hardly the free-for-all Grynbaum suggests. But at a time when one party adheres to an anything-goes strategy that has taken brazen lying to a new level, denies science, and regularly attacks journalists as “the enemy of the people,” painting a “both sides do it” picture of the partisan media environment glosses over very real and important differences.

For Grynbaum, media outlets simply have “irreconcilable differences”—so Fox’s puerile (but strategically us vs. them) media commentary that veteran foreign service officers testifying against Trump “looked like people who sat by themselves at recess” is equated with MSNBC’s commentary that those same officers gave “a fuller picture of the corrupt abuse of power by the president of the United States.”

Grynbaum’s other main example, in which “tribal allegiances to news outlets mean that any hint of heresy can provoke an outcry,” is egregious. Here, he equated as “similar backlash” the “liberal” criticism of an NBC.com analysis (11/13/19) that found the impeachment hearings lacking in “pizazz,” and “conservative” ire that Fox‘s Bret Baier noted that Trump’s real-time attacks on an impeachment witness allowed Rep. Adam Schiff to characterize Trump as engaged in “witness tampering or intimidation.” The analogy is incomprehensible: In one case, a political reporter judges impeachment by its entertainment value—which one would hope a serious media analyst would recognize as problematic, regardless of one’s political ideology—while in the other, a political reporter makes a factual observation that his partisan viewers apparently felt shouldn’t be mentioned, because it makes Trump look bad.

It’s also not clear who in the world might have a “tribal allegiance” to NBC—but by presenting the centrist outlet as an analog to Fox News, the Times lends credence to the right-wing strategy of painting all corporate outlets besides Fox as “liberal” (and therefore untrustworthy). 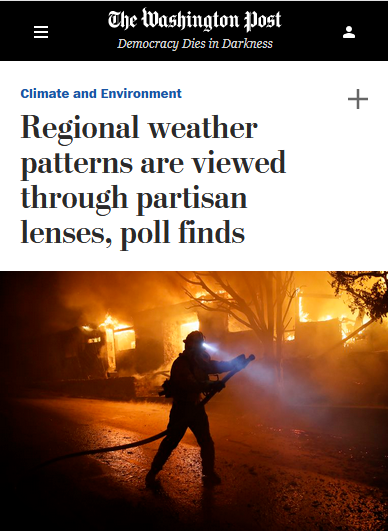 The Washington Post (11/18/19) presents the impact of climate on weather as a matter of opinion.

In another example, “Regional Weather Patterns Are Viewed through Partisan Lenses, Poll Finds” (11/18/19), the Washington Post demonstrates how this insistence on equivalence extends throughout coverage. In the article, Scott Clement, Emily Guskin and Dan Balz report that common experiences across the United States of extreme weather events

“The results highlight the degree to which regional weather patterns are now viewed through partisan lenses,” the Post explains, “just as the national debate about climate has been dominated by sharp differences between Republicans and Democrats over whether scientific evidence of climate change is valid.”

As the paper acknowledges in one easily missed line, scientists agree that climate disruption has exacerbated extreme weather events. So what the poll actually shows is that Democrats view regional weather patterns through a science-based lens, while Republicans reject the science-based view, presumably because of partisanship—and the “reality” their media of choice creates for them. That’s not a “both sides do it” story, as the paper would have readers believe; it’s a “one side does it” story. But, like Grynbaum, the Post won’t tell it that way, because it must take pains not to offend either “side” more than the other.

This is the fiction that so many corporate journalists cling to: that objectivity is possible and preferable, and that taking flak from the left and from the right means they’re doing a good job. Grynbaum’s nostalgia for an era of a single broadcast reality (the “same television hearth”), which he and the rest of the “objectivity” crowd no doubt see themselves as a part of, erases the ideology of the outlets that refuse to acknowledge any biases. 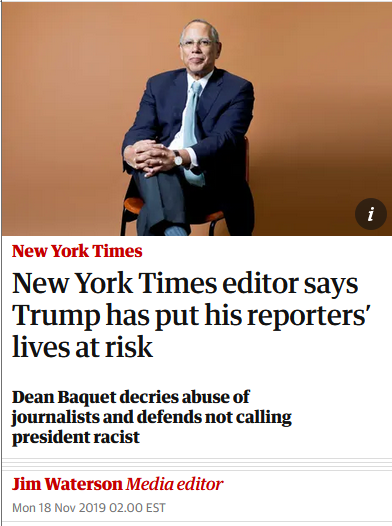 The New York Times‘ Dean Baquet (Guardian, 11/18/19) says he’s “reluctant to allow his reporters to ascribe value judgments to the president” whose attacks he views as putting those journalists’ lives in danger.

New York Times executive editor Dean Baquet recently commented that he is “constantly fighting against pressure to ‘take a full-bodied side’ against the president,” and resists demands to call Trump racist or sexist because he is “not in a position to know whether he [makes comments] because he is a racist.” According to an interview with the Guardian (11/19/19), Baquet

warned junior staff and readers against pushing to embrace left-wing Democratic candidates such as Elizabeth Warren or Bernie Sanders, saying the outlet would lose its status if it openly sided with particular politicians.

Instead, he insisted the organization’s lengthy investigation into the president’s taxes had more impact, because of the division between reporting and comment. “The way I look at it, that story would not have been believed had it been written by a news organization that had spent two years advocating against Donald Trump.”

It’s telling that Baquet only warns staff and readers against left-wing candidates, not centrist ones. Corporate journalists rarely see centrism as an ideology; it’s not conservative or liberal, so it must not be political and therefore must not be problematic. In the face of a no-holds-barred attack against media (and government institutions), corporate media’s response is to continue to pretend they can exist outside of the fray, looking down equally at “both sides” from their unassailable perch in the center, and imagining that lengthy investigations about the president’s taxes are going to change things. As the election nears, genuine truth-telling—as opposed to disingenuous false equivalence—is more urgent than ever, but it’s just as unlikely as ever that corporate media will be up to the challenge.

In Kansas’ Republican senatorial primary, voters will choose between former Kansas Secretary of State Kris Kobach and Rep. Roger Marshall — who some GOP strategists believe is by far the more electable of the two. And according to Politico’s James Arkin, one of the prominent Republicans who is sounding the alarm is Kevin McLaughlin, executive director of the National Republican Senatorial Committee.

Although Kobach and Marshall are both hard-right politically, Kobach is more extreme — so extreme that even in deep red Kansas, he lost a gubernatorial race to a centrist Democrat in the 2018 midterms. That Democrat, Laura Kelly, is now governor of Kansas, where Kobach was a leading promoter of the racist “birther” conspiracy theory during the 2010s.

The ongoing saga of the Republican Party's attempt to hold a convention in August to choose Donald Trump as their presidential nominee is leaving small business owners in spurned Charlotte, North Carolina and Jacksonville, Florida frustrated and angry over lost income at a time when the economy is reeling.

According to a report from the Daily Beast, business owners in Charlotte are angry that the president abruptly pulled the convention from their city over concerns he couldn't put on the big production he craves due to the COVID-19 pandemic and Jacksonville business owners are unsure whether the convention that was moved to their city will pay off now that the GOP is dialing it back over the same health crisis concerns.

Trump has ‘confused’ his own voters about mail-in ballots — and GOP fears ‘turnout crisis’: report

President Donald Trump's frequent attacks on mail-in voting have made his own voters far less likely to take advantage of filing absentee ballots -- and the Washington Post reports that GOP operatives fear it could create a "turnout crisis."

Alabama Secretary of State John Merrill tells the Post that he recently met with a group of Republican voters who traditionally send their ballots through the mail, but were now reluctant to do so thanks to the president's regular attacks on the system.

‘I’m a white supremacist’: Trump supporter gets choked out after slapping woman in Florida

Donald Trump is doomed — and he knows it

Trump and Texas Republicans are in big trouble as voters flee them: WaPo reporter