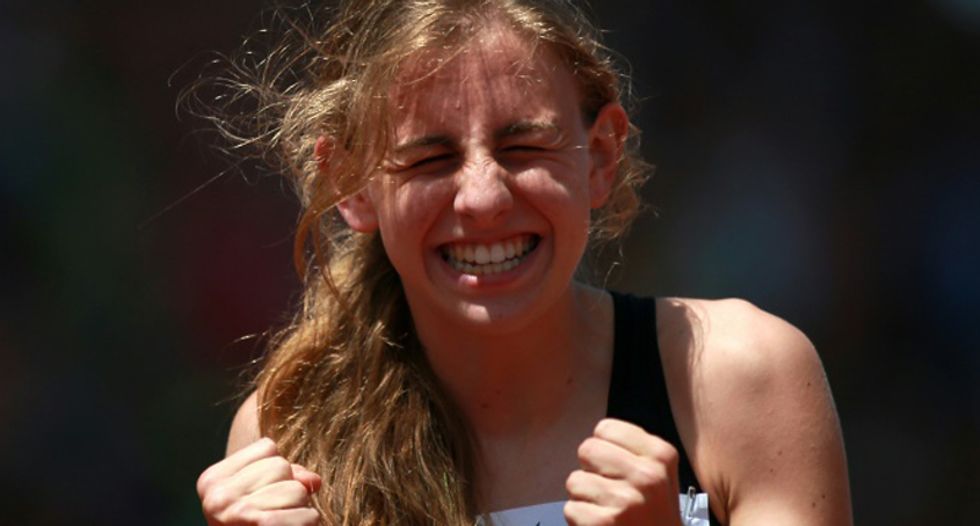 Mary Cain of the USA celebrates being the first high schooler to break the two minute mark in the 800m at the 2013 Prefontaine Classic Diamond League meeting in Eugene, Oregon, AFP photo by Jonathan Ferrey

Nike says it is investigating claims by former runner Mary Cain that she suffered physical and mental abuse as a member of the Nike Oregon Project headed by disgraced coach Alberto Salazar.

Cain, 23, was a high school prodigy who was tipped for middle-distance greatness. She qualified for the 2013 World Championships and made the final of the 1,500m there at the age of 17.

In an op-ed for The New York Times published on Thursday, Cain wrote that she suffered suicidal thoughts and began cutting herself as a result of the methods employed by Salazar and the Oregon Project staff.

Under pressure upon her arrival with the team in Eugene, Oregon, to become "thinner and thinner and thinner," Cain said she eventually stopped menstruating for three years and broke five bones because of osteoporosis.

"These are deeply troubling allegations which have not been raised by Mary or her parents before," Nike said in a statement on Friday.

"Mary was seeking to rejoin the Oregon Project and Alberto's team as recently as April of this year and had not raised these concerns as part of that process.

"We take the allegations extremely seriously and will launch an immediate investigation to hear from former Oregon Project athletes. At Nike we seek to always put the athlete at the center of everything we do, and these allegations are completely inconsistent with our values."

Cain told the New York Times that she joined Nike "because I wanted to be the best female athlete ever.

"Instead I was emotionally and physically abused by a system designed by Alberto and endorsed by Nike."

In an email to the Times, Salazar said he had supported Cain's health and welfare.

Nike shut down the Oregon Project in October when Salazar was banned for four years for an array of doping offenses that included trafficking in testosterone, tampering with the doping control process and administering illicit infusions of the fat-burning substance L-carnitine.

Salazar has denied wrongdoing and vowed to appeal the ban.

Cain also took aim at Nike, saying the apparel giant and major athletics sponsor had contributed to a "systemic crisis" in which "young girls' bodies are being ruined by an emotionally and physically abusive system."

Kara Goucher, an athlete who took her concerns about Salazar to the US Anti-Doping Agency in 2013, was quick to voice support for Cain -- and take a swipe at Nike for the statement in which they note Cain had not come forward before.

"So @Nike responds to @runmarycain," Goucher wrote on Twitter. "Takes the time to victim shame Mary, before saying they will investigate. I hope you come to me, because I have stories to match all of Mary's claims and so much more. Don't let this be more lip service, actually do something."

Cain herself took to Twitter on Friday to discuss her seemingly contradictory attempt to return to the Oregon Project earlier this year.

"As recently as this summer, I still thought: 'Maybe if I rejoin the team, it'll go back to how it was,'" she wrote. "But we all come to face our demons in some way."