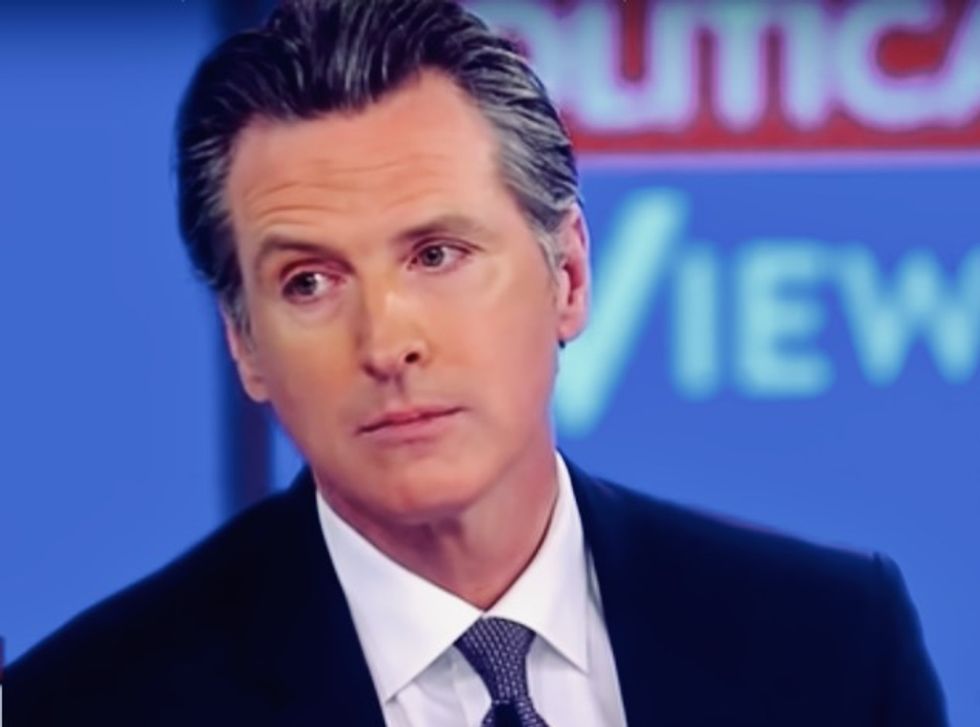 "PG&E would be in prison, if it were a citizen, given how many people have died at its hands."

As the West Coast's wildfire season continues, dozens of progressive organizations sent a letter to California Gov. Gavin Newsom Thursday urging the first-term Democrat to "facilitate a public takeover of PG&E to protect ratepayers, California communities, and our climate."

Calls for a public takeover of PG&E have stacked up in recent weeks as California's largest energy utility has faced widespread criticism for intentionally shutting off power for state residents and failing to adequately invest in reducing fire risks. Those critiques are outlined in the letter (pdf) signed by representatives of over 50 groups and former California Public Utilities Commission (PUC) president Loretta Lynch.

"PG&E has shut off power to millions of residents, been found responsible for starting numerous wildfires that have killed Californians, destroyed homes, neighborhoods and whole towns, and cost billions of dollars," the letter says. "This devastation is the result of PG&E's decision to neglect maintenance and investments in infrastructure in favor of paying out billions in shareholder profits and executive pay."

Arguing that "it is time for California to take over PG&E and stop letting profits stand in the way of a safe, clean energy future we all need and deserve," the letter lays out the case for public ownership:

Public ownership will help increase accountability and transparency. Currently, the public cannot attend corporate board meetings and has limited leverage over these boards. Public records laws do not apply to private corporations, which makes oversight and accountability even harder. Ratepayers are also unable to compete with the multimillion-dollar lobbying arm of companies like PG&E that have fostered a weak regulatory environment for electric utilities.

We need major investments in the electricity sector to address fire safety and climate change, including everything from developing local energy resources, to burying lines and cutting trees to replace dirty, greenhouse-gas-emitting power plants with clean, renewable energy from the sun and wind. These investments can be done at a lower cost to ratepayers under a public utility, which can borrow at a fraction of the cost of private power companies. Furthermore, public utilities do not have to pay out profits, taxes, or exorbitant executive salaries.

The letter's lead signatory, Food & Water Action California state director Alexandra Nagy, said in a statement that in the event of a public takeover of the embattled utility giant, "the public would have an increased ability to advocate for investments in fire safety and local clean energy that would benefit ratepayers and the climate."

Highlighting a nearby example of the power of public ownership, Nagy added, "in contrast to PG&E's negligence, the Los Angeles municipally-owned utility just approved a historic project that will provide clean solar energy and battery storage to power more than 280,000 homes."

Other letter signatories include representatives from the groups CodePink, Stand.earth, Friends of the Earth U.S., the Center for Biological Diversity, 350.org, the Democratic Socialists of America, and many state and regional organizations.

The California Nurses Association sent its own version (pdf) of the letter to Newsom. In a statement, co-president Zenei Cortez, RN, suggested that "PG&E would be in prison, if it were a citizen, given how many people have died at its hands."

"We need Governor Newsom to take the utility's failures more seriously than ever before," she said, "as we push for a new direction that centers public health and safety and a concentration on more municipal power."

50 organizations, including the CA Nurses Association, have sent a letter to Gov. @GavinNewsom.. It's time for the… https://t.co/hIBVAgBV2T
— California Nurses (@California Nurses)1573779598.0

The letter to Newsom notes that "at a recent press conference, you implored PG&E to fundamentally change the way it operates and raised the prospect of a public takeover as a backup option." However, it says, "given PG&E's track record and the benefits of public power, public ownership should be plan A."

PG&E announced in January that it was filing for Chapter 11 bankruptcy protection in the wake of devastating fire seasons in 2017 and 2018. Newsom said at the press conference that PG&E is "in bankruptcy already because of their choices. But when they come out of bankruptcy that has to be a completely re-imagined company and we are doing everything in our power to make sure that that indeed is the case."

Whether Newsom's criticism of the utility giant will amount to state action, though, remains to be seen.

In a report Monday that referenced the October press conference, the Washington Post revealed that over the past two decades Newsom and his wife, Jennifer Siebel Newsom, "have accepted more than $700,000 from the Pacific Gas & Electric Co., its foundation, and its employees as the utility has supported his political campaigns, his ballot initiatives, his inauguration festivities and his wife’s foundation, including her film projects."

"Records show PG&E has spent at least $227,000 on Newsom's political campaigns and committees supporting them over his two decades in public office, helping to fund his rise from San Francisco mayor to one of the country's most influential Democratic leaders," according to the Post. "PG&E employees have spent an additional $70,000 on his campaigns. The company gave $25,000 for his mayoral inaugural costs and $25,000 to city ballot measures that he supported."

California Governor Gavin Newsom has accused PG&E of mismanaging funds he said it should have used to upgrade its e… https://t.co/a0N5AdFogs
— Doug MacMillan (@Doug MacMillan)1573510169.0

PG&E, the Post pointed out, is "one of the most politically active companies in California state and local politics and a prolific contributor to Bay Area charities." From 2017 to 2018, the company spent $5.3 million on state and local campaigns.

Although Newsom declined to be interviewed by the Post, his spokesperson Nathan Click said the governor has "used every tool at his disposal" to hold PG&E accountable and that he stopped taking contributions from the utility after his November 2018 election.

When a local reporter asked Newsom about PG&E's campaign contributions during a press conference earlier this month, he responded: "If the suggestion is somehow I'm influenced by that, you're wrong—absolutely, unequivocally wrong—and there's not one thing you can point to during my tenure as governor which suggests otherwise."