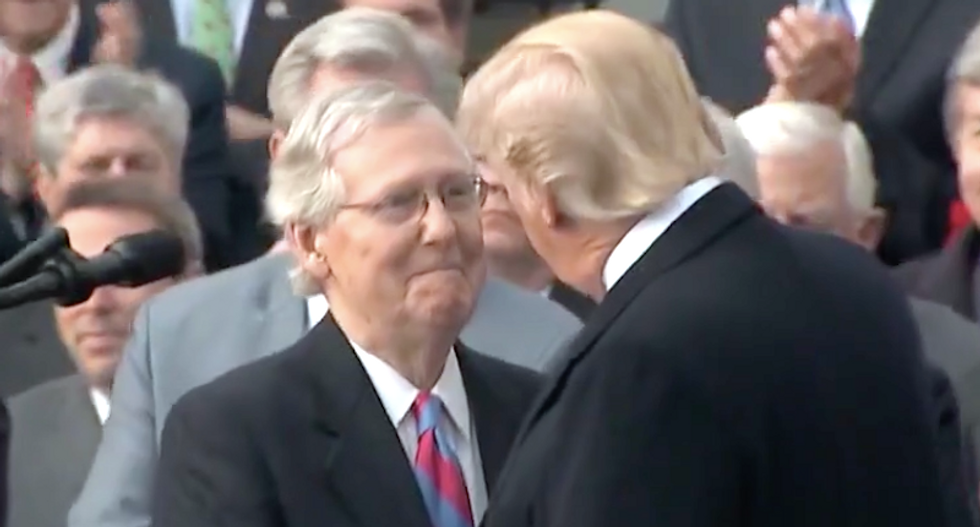 In an interview with the Washington Post's Jennifer Rubin, former Sen. William Cohen (R-ME) launched a fusillade of attacks at members of his party for sticking with Donald Trump despite a multitude of impeachable offenses.

Cohen, who crossed the aisle to serve as Defense Secretary under former President Bill Clinton, was unsparing in his criticism, saying the modern GOP is "spineless" and standing by while the president launches vicious attacks left and right at his enemies.

According to the former lawmaker, Republicans subservience to the president is rooted in either "fear or complicity," before adding “It’s predominantly fear he will target them.”

As Rubin writes, Cohen, "points to Trump’s public declaration that four congresswomen of color should 'fix the totally broken and crime infested places from which they came' and 'go back' home. Trump, in Cohen’s eyes, 'put a target on their back.' He also cites Marie Yovanovitch, the former ambassador to Ukraine who was told her safety was at risk when she was ordered back to the United States, and the recent conviction of a woman caught sending white powder to Cohen’s former staffer, Sen. Susan Collins (R-Maine). Cohen, in other words, thinks there is more than the threat of an errant tweet. The prospect of actual physical harm cannot be ignored."

Writing, "Cohen has no doubt that Trump has abused his power and committed impeachable acts. He starts with Trump’s public accusations and threats against lawmakers," Rubin notes he told her, "Certainly that’s an abuse of power. There’s nothing like the president basically inciting [attacks].”

"Trump does this, Cohen says, when he suggests a 'civil war' would occur if he were ousted. 'Now we have people walking around with AR-15s and AK-47s. What are we doing here?'" Rubin relays.

Adding that he has no doubt Trump has committed impeachable offenses, the longtime GOP member worries his former colleagues will give the president a pass when it comes to a trial in the Senate.

“I think if you took a vote now in the Senate, all but one or two … virtually all would acquit,” he predicted. “But we are still a long way to go.”