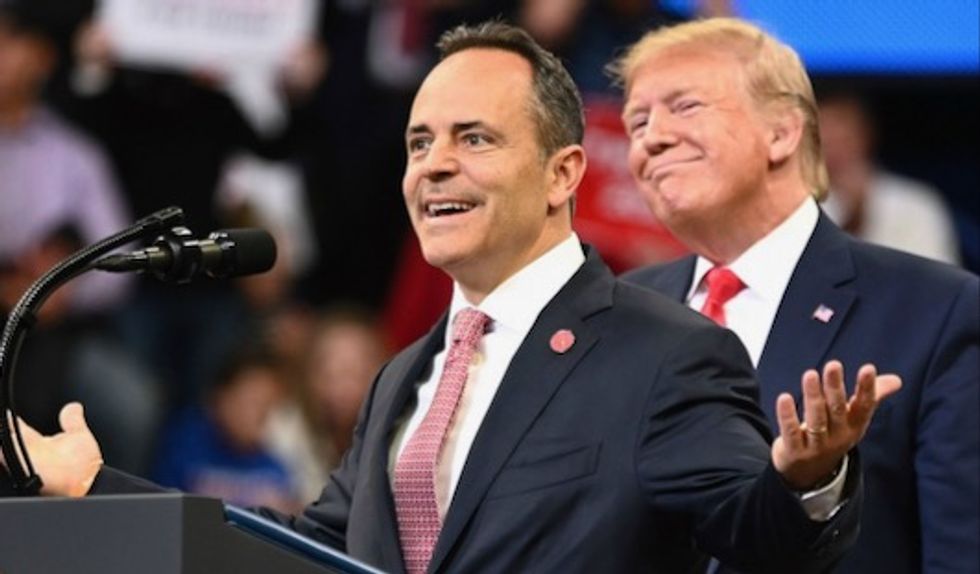 Republican National Committee chairwoman Ronna McDaniel insisted that President Donald Trump's visit to Kentucky helped the state's GOP governor -- who appears to have lost his re-election bid -- but that's not what really happened.

The president appeared in Lexington with Gov. Matt Bevin and both of Kentucky's senators for a rally the night before Tuesday's election, but he was the only Republican candidate to lose a statewide race in bright-red Kentucky, reported the New York Times.

“No one energizes our base like @realDonaldTrump,” McDaniel tweeted late Tuesday, after media outlets began calling the race for Bevin's opponent, Democrat Andy Beshear.

No one energizes our base like @realDonaldTrump. In Kentucky, the governor was down 17 points. President Trump h… https://t.co/pJfDrvkzo6
— Ronna McDaniel (@Ronna McDaniel)1573015284.0

The RNC chairwoman claimed the president helped Bevin close a 17-point deficit that wasn't measured on any recent polls.

Polls conducted in recent weeks by the GOP, along with public surveys and campaign polling, showed the race was close -- and indeed, Bevin still hasn't conceded a race he's losing by just a few thousand votes statewide.

Bevin is seeking a recanvassing of absentee ballots, and the Republican-majority legislature may try to decide what they see as a "contested" election themselves.

The RNC defended McDaniel's hype, saying internal polling showed Bevin down 15 points in May, when Trump endorsed the governor, and pointed to a mid-October poll by Targoz Market Research as the source for the 17-point margin her tweet referenced.

But neither the RNC or McDaniel noted that polling aggregator FiveThirtyEight had designated that pollster as "below average" in reliability.

Most public polls showed the Kentucky race within single digits, and none of them showed anything like that 17-point spread.

Republican polling, which McDaniel has access to, also showed the race as close or dead even heading into the final stretch.

Former Trump aide Sam Nunberg said the president was spinning the loss in the wrong direction.

“The president should be cognizant that there is an advantage to a Matt Bevin losing or in losing the House of Representatives,” Nunberg told the Times. “It creates voter intensity for him. The president always looks to spin a loss, as opposed to a politician who tries to play an advantage off of a loss.”