‘That’s not what I asked’: GOP congressman flails as Fox host presses him over Trump’s Ukraine scheme 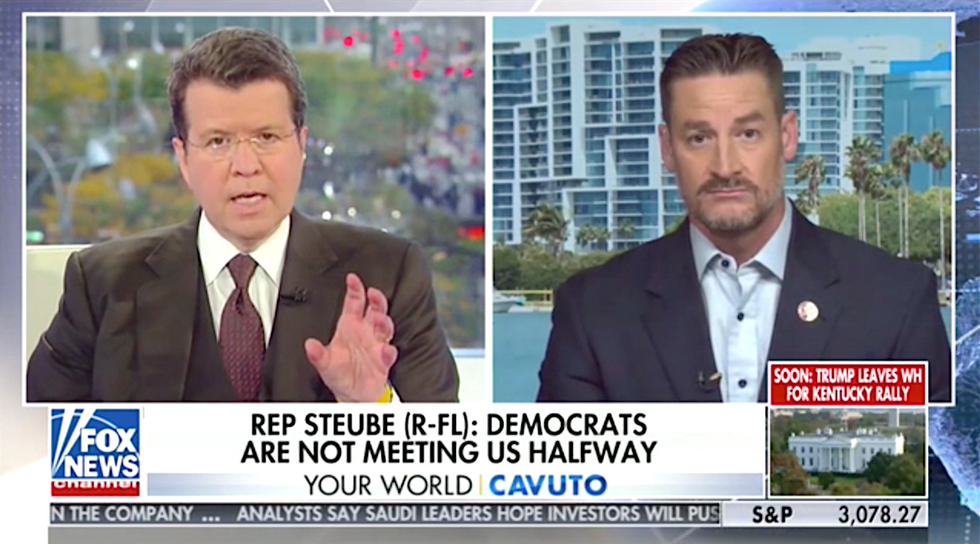 Cavuto then brought up President Trump's infamous phone call with Ukraine's President, telling Steube that his Republican colleagues are now saying that even if there was a "quid pro quo" implied during the call, "it's not impeachable."

"Do you agree with that?" Cavuto asked.

Steube replied that all one needs to do is read the transcript of the call to "decide for themselves."

"There wasn't anything in that transcript that was impeachable," Steube said. "[Trump] gave the aid, the aid was given to the Ukraine -- unlike the Obama administration that sent the Ukraine blankets -- the Trump administration actually sent them bombs and munitions to be able to defend themselves against the Russians."

Cavuto pressed further, asking Steube that if it indeed does turn out that Trump attempted to withhold aid to Ukraine in order to pressure its government to investigate his political rivals, would he find that to be a "high crime and misdemeanor."

"Well again, the aid was given to Ukraine..."

"That's not what I asked you," Cavuto interrupted. "If it turns out there was a link."

Steube hesitated, then returned to his contention that there was nothing in the transcript that pointed to Trump committing a crime.