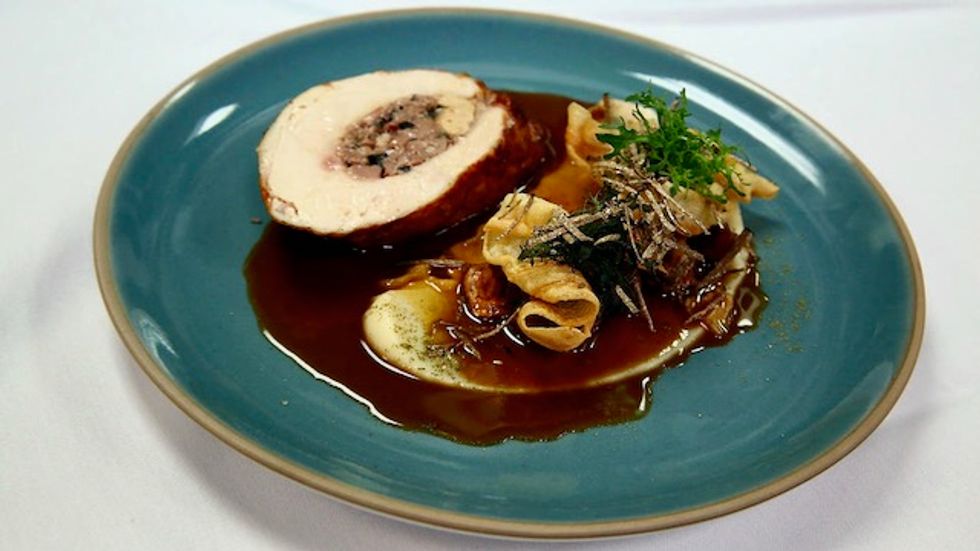 Astrid Stawiarz, AFP | Volaille Farcie with foie gras, parsnip and Urbani black truffles created by chef Laetitia Rouabah is served during the Alain Ducasse celebration of women in the kitchen part of the Bank of America Dinner Series presented by The Wall Street Journal at Benoit Bistro on October 12, 2017 in New York City.

US top chefs reacted with outrage on Thursday to a decision by the city of New York City to ban foie gras -- a controversial French delicacy made from the livers of force-fed ducks and geese.  But French foie gras producers were unperturbed by the measure.

"This is idiocracy," tweeted chef David Chang of the famed Momofuku global restaurant chain, adding, "Stupid short sighted and a misunderstanding of the situation."

"I think a ban on foie gras is ridiculous," said James Beard Award-winner Ken Oringer, co-owner and chef at Manhattan's Toro tapas restaurant that serves dishes like foie gras torchons with buttermilk biscuits and foie gras katsu sandwiches. "Food choice is everything and the beauty of our country is that we can make the choice to eat what we want to eat."

New York City council voted overwhelmingly on Wednesday to take the French delicacy off the menu. The bill, which is expected to be signed by Mayor Bill de Blasio, would forbid the sale of the French specialty starting in 2022.

'A historic day for animal rights'

Animal welfare activists had campaigned for a ban on the grounds that the methods used to produce foie gras are cruel, involving force-feeding a bird a corn-based mixture through a tube slipped down its throat. Lawmakers also ruled that it is cruel to force-feed ducks and geese to fatten their livers for human consumption.

"It is a historic day for animal rights in New York City," Matthew Dominguez of the campaign group Voters for Animal Rights told AFP.

Yanay added that the ban would badly hit his company. "I have 400 people who've been working for me for 30 years. Those people will face a tragedy," he said.

US farmers who produce foie gras -—meaning “fatty liver”, in French—- say the birds are treated humanely and don't suffer during the fattening process.

The council vote was 42-6 for the final version of the bill, which prohibits establishments from selling, serving or even possessing foie gras and calls for a fine of up to $2,000 for each violation. Some 1,000 New York restaurants currently offer foie gras.

But French foie gras producers shrugged off the decision to ban the controversial delicacy, saying their access to the US market was already barred by sanitary rules.

"I am astounded that the country of the Statue of Liberty and liberalism can ban the consumption of a product that is healthy and sells well," Marie-Pierre Pe, director of the interprofessional committee of foie gras (CIFOG) which groups French producers, said. "It's a symbol of French gastronomy which is being targeted but there is nothing like a ban to boost sales," Pe said.

"For us, there is going to be no economic effect as no French company exports (foie gras to the United States)," she said, explaining that French producers, respecting EU legislation, fell foul of American sanitary requirements.

Philippe Baron, president of the association for the promotion of foie gras from the southwestern Gers region, a bastion of the delicacy, confirmed that the ban "has no meaning from an economic point of view.  "The US is not a country that adopted this product," he argued, referring to French-made foie gras, while admitting that "from a symbolic point of view, it is a shame."

Some 80% of foie gras consumed worldwide is made in France.