Trump has likely added witness intimidation to the list of impeachable offenses: reporter 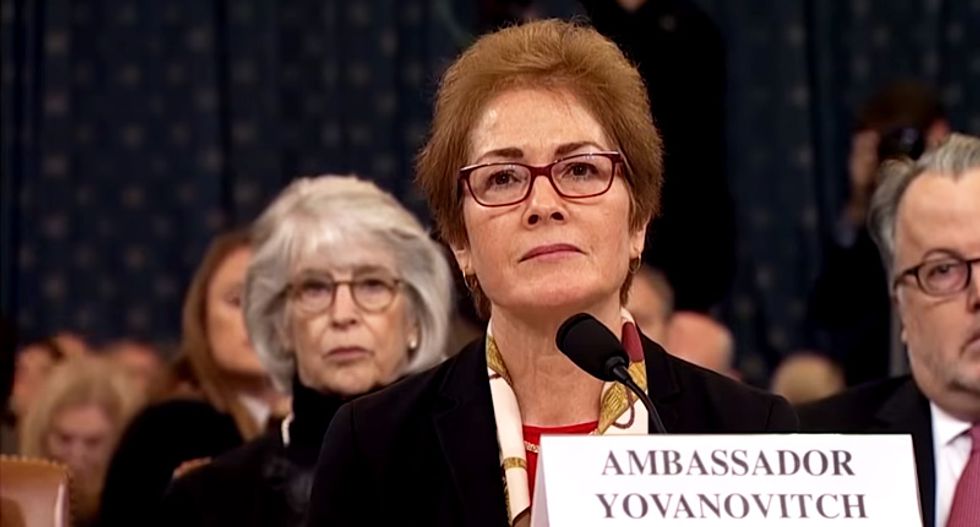 President Donald Trump has not only railed against diplomat Marie Yovanovitch, former U.S. ambassador to Ukraine and one of the witnesses in the impeachment inquiry — he has done so in the middle of her public testimony. And journalist Bess Levin, reporting in Vanity Fair, asserts that by doing so, Trump might be adding witness tampering and witness intimidation to the articles of impeachment that the U.S. House of Representatives could indict him on.

On Friday morning, Trump tweeted, “Everywhere Marie Yovanovitch went turned bad. She started off in Somalia, how did that go? Then fast forward to Ukraine, where the new Ukrainian President spoke unfavorably about her in my second phone call with him.”

Whenever Trump uses Twitter to attack witnesses, Levin stresses, he only makes himself look worse.

Levin reports, “In the president’s tiny brain, he clearly thought assassinating Yovanovitch’s record would help his case. But to the outside world, it smacked of witness intimidation — a charge Democrats suggested could be added to his rap sheet as another article of impeachment.”

One such Democrat, Levin observes, is California Rep. Jackie Speier, who told reporters, “The president in real time is engaging in witness intimidation and witness tampering. I don’t know how much more egregious it has to get before the American people are going to recognize we have someone in the White House who conducts himself in a criminal manner on a day-to-day basis.”

After using Twitter to rail against Yovanovitch during her testimony on Friday, Trump returned to Twitter on Sunday and went after another witness in the impeachment inquiry: Jennifer Williams, an aide to Vice President Mike Pence on foreign policy. Trump tweeted that Williams should read the transcript of his now-infamous July 25 phone conversation with Ukrainian President Volodymyr Zelensky.

“Williams, of course, doesn’t need to read the transcript of the call because she listened in on it herself,” Levin writes.

Tell Jennifer Williams, whoever that is, to read BOTH transcripts of the presidential calls, & see the just release… https://t.co/z5Iwr6LSOp
— Donald J. Trump (@Donald J. Trump)1574020632.0

Speier is hardly the only Trump critic who has accused him of witness intimidation. Former federal prosecutor Mimi Rocah, who is often featured as a legal expert on MSNBC and NBC News, tweeted, “Impeachment: Trump abuses power by harassing, intimidating witnesses like Yovanovitch. And it’s been one of his go-to moves throughout.”

Sen. Kamala Harris, a presidential candidate and former prosecutor, used Twitter to remind Trump that “witness intimidation is a crime.”

Impeachment: Trump abuses power by harassing, intimidating witnesses like Yovanovitch. And it’s been one of his go… https://t.co/lsV31VFu9e
— Mimi Rocah (@Mimi Rocah)1574000902.0