Trump is selfishly using a hero dog to try and increase his popularity and approval: columnist 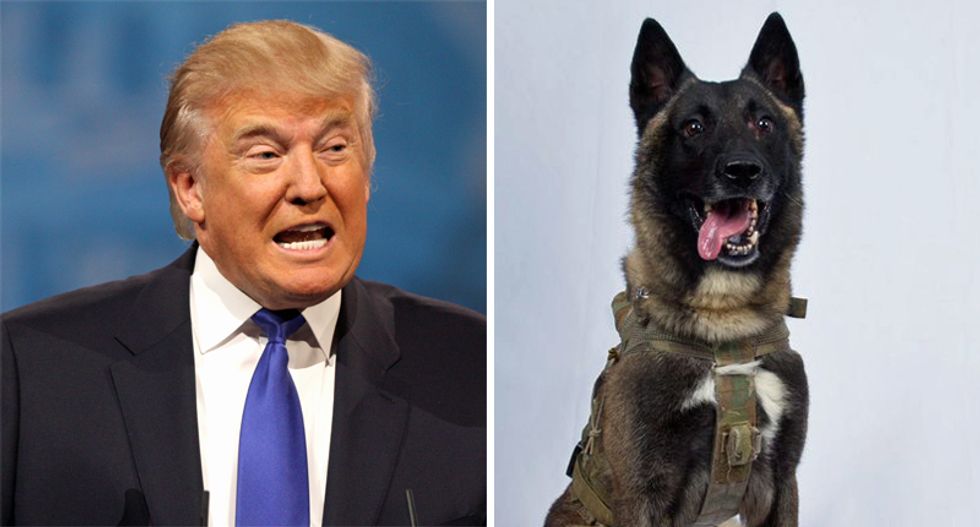 President Donald Trump's favorability and approval ratings are in the tank. A new poll out Sunday from the Wall Street Journal showed that Americans are quickly getting on board with Trump's impeachment. In just a short time, approval for impeachment has increased by 6 percent, despite the president going all-in on the argument to "read the transcript." A full 53 percent of Americans disapprove of the president.

Washington Post columnist Kathleen Parker wrote Sunday that Trump seems to have exhausted all possible ways to get him out of his problems, so he's going to have to look for creative ideas. Trump's Syria screw-up almost ruined those tracking ISIS leader Abu Bakr al-Baghdadi, but they were able to salvage it and take him out. Despite that, Trump's poll numbers not only didn't improve, but more people also support impeachment and he was booed at two sporting events in a week.

"Thus, it came to pass that Donald Trump, the first president in 120 years to not have a dog, created a national hero in the canine Conan, who cornered Islamic State leader Abu Bakr al-Baghdadi, whereupon the terrorist kingpin committed suicide," wrote Parker.

While Conan, the dog, is being honored for his role in the team's capture and death of Baghdadi, Trump is desperately trying to link himself to anyone more popular than him, who can't ultimately denounce him. Luckily for Trump, Conan doesn't speak human, and he can't do an exclusive with Anderson Cooper revealing he wants nothing to do with the president.

"Question: What do we know about Trump? He craves attention. What will he do to get attention? Anything. When things start going south for Trump, what does he routinely do? Creates a distraction. Even roll out the red carpet for a dog? Yes!" Parker continued.

Despite being a germaphobe, Trump is eager to embrace the dog if it means he can score a win. The only upside of Trump's post awarding a fake Medal of Honor to the dog was that the whole country got to spend a small news cycle talking about dogs instead of the typical political rancor.

"If this were really about Conan, I'd be setting the DVR, but we know otherwise," Parker wrote. "The honoring of Conan is the desperate measure of a man who has seen the end of his own tunnel — and there's no pretty light."