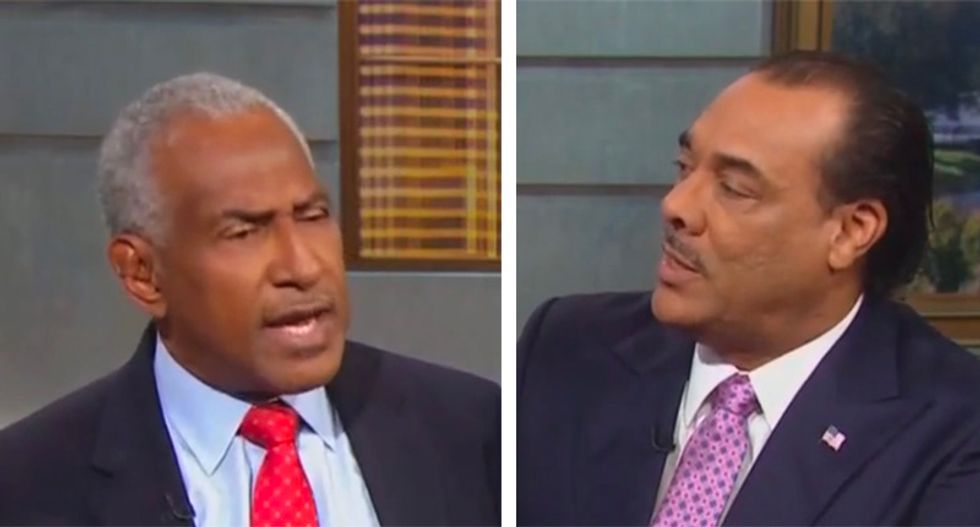 "What is his standing in the black community as you've seen it?" asked anchor Christi Paul.

"We take the words of some of the Republicans. As Andrew Gillum said when he was running for governor of Florida, it is the racists who calls this president the racist," said Rose. "It's Lindsey Graham who said he was racist, xenophobic, and a religious bigot. We can't disagree with that. The policies of this administration including not enforcing consent decrees, not enforcing four consent orders that were voluntary as it relates to police brutality all over this country, his administration has rolled back the gains we have made under the Obama Administration ... I've known numerous Black Republicans, but they don't ascribe to this kind of racism."

"Look. At the end of the day the president gets the credit good or bad. Let's just agree he's doing better for all Americans," said LeVell. "I have to keep putting this in perspective. It is essential and vital to build Black generational wealth back. Opportunity Zones is a magnificent tool. It's one of the best tools we have. We can get better, yes. But when you go to an African-American community, ask yourself, who owns the grocery store, the gas stations. I'm one of the largest Black jewelry store owners in the country. I'm African-American ... the numbers don't lie."

"Here are the numbers," said Paul. "The president in August of 2016 he said, 'At the end of four years I guarantee you I'll get over 59 percent of the African-American vote.' In the latest Quinnipiac poll, he has 10 percent and 80 percent believe he's racist."

"The man has been out there for 40-plus years, Christi," complained LeVell. "All of a sudden he announces a run for president and he's racist."

"He was a racist before he announced his race for president," said Rose. "He called for execution for the Central Park Five, who were found to be innocent, and he still has not apologized for that."

"Bruce, let me ask you this, and, Richard, the same question," said anchor Martin Savidge. "How much do you believe the president was actually targeting African-Americans [with this rally] or was more directed to try to soothe the worried minds of white American voters who feel very bad about supporting a president who talks down to African-Americans?"

"I disagree. Look at the cities. Look around this great nation, Martin," said LeVell. "The numbers don't lie. There's a crane in every part of Atlanta. There's a revitalization."

"Are we better off now than we were eight years ago?" said LeVell.

"Eight years ago, he doesn't have anything to do with it!" shot back Rose.