WATCH: Voters in Pennsylvania's Trump country say the president's economy is leaving them behind 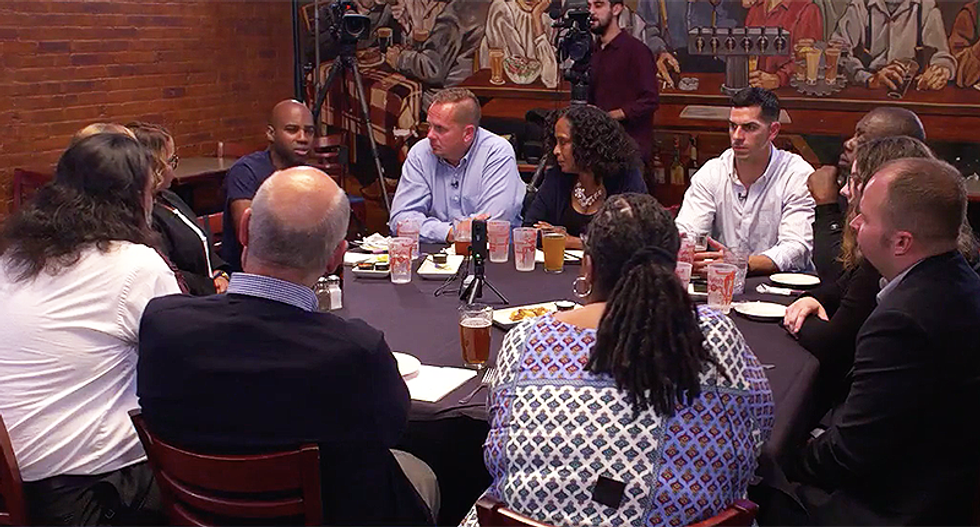 President Donald Trump often uses the stock market as a measure of how well his economy is doing. For many Americans, however, the markets aren't a viable option for increasing their money. A group of Bethlehem, Pennsylvania voters, explained to MSNBC that the Trump economy isn't helping them out very much.

Most Americans don't own stocks, according to 2016 market data. To make matters worse, the top 10 percent of American households, as defined by total wealth, now own 84 percent of all stocks in 2016.

Bethlehem's vote was split in the 2016 election. Undecided Democratic voters don't support the Trump economic policies that have left them behind, but they're afraid of some of Democratic policies that could cost them even more money.

"If you work 40 hours a week, you should be able to live pretty comfortably," said one voter.

"The top one percent is garnering more and more of the total wealth in the world," a man explained.

Reporter Harry Smith noted that the stock market is going "gangbusters" under Trump.

"It's smoke and mirrors," one man claimed.

"I need to know as a young voter and an energetic voter, someone who gets people energized to vote, how are they going to make sure people like my age and people younger are not set up for failure despite a system that tells us that we are set up for success," one young woman explained.

CNBC editor-at-large John Harwood explained the US has an economy that is delivering high levels of corporate profits. The Republican tax cut helped increase that with huge cuts to companies that were expected to use the funds to hire more people. The "trickle-down economics" theory hasn't worked in the past, and it failed to deliver for Trump as well.

"But job quality and wages have not risen in a substantial way -- a life-altering way for a lot of voters," Harwood continued. "Therefore, more and more people are fearful that their children are not going to be able to do as well as they did or be able to get to the middle class. Politicians in 2020 are going to have to address that."

Such attitudes are part of the reason that candidates like Sens. Bernie Sanders (I-VT) and Elizabeth Warren (D-MA) are doing well and why Trump succeeded in 2016. Harwood went on to say that Trump supporters that care about social issues, race, religion, and the like are more inclined to support Trump regardless of the economy. Other former Trump voters who haven't benefitted much in the Trump economy may look elsewhere.

One small business owner in the town complained about the minimum wage increase to $15, saying that he pays one of his long-term employees that plus commission and the worker makes more than the owner does. When he needed to hire a high school student to come in and help out, he had to pay the student $15 an hour as well, which doesn't look great for his other staffer who has been there for seven years.

MSNBC host Stephanie Ruhle said that there are a good number of people who haven't benefitted from the Trump economy, but they may vote for Trump again because some Democratic policies would hurt their businesses.

Elizabeth Warren has said that some of her policies are aspirational and recognizes that they may not come to fruition. Former Vice President Joe Biden has been critical of those policies, saying that they have no chance of passing, even if Democrats take back the Senate in 2020.