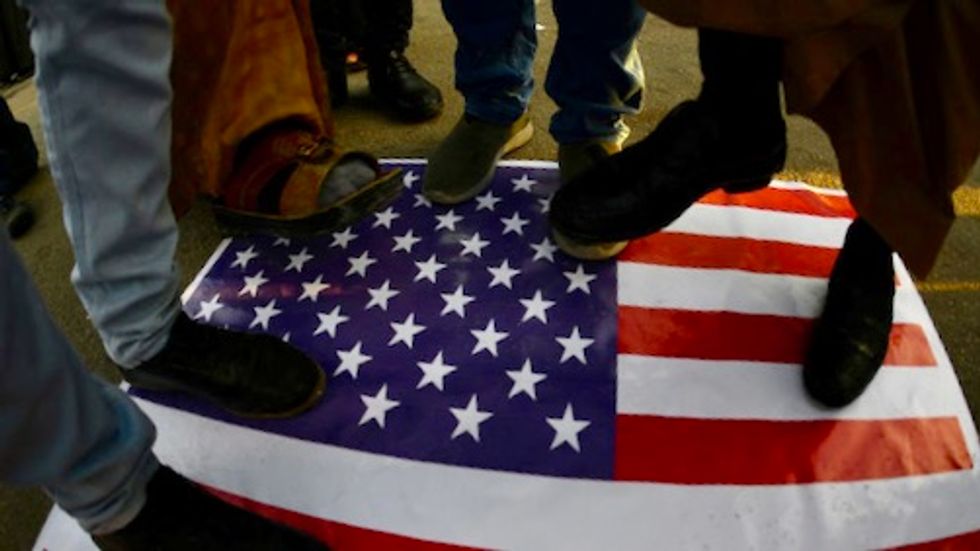 Iraqis stand on US Flag AFP

Several thousand Iraqi protesters attacked the US embassy in Baghdad on Tuesday, breaching its outer wall and chanting "Death to America!" in anger over weekend air strikes that killed pro-Iran fighters.

It was the first time in years protesters have been able to reach the US embassy, which is sheltered behind a series of checkpoints in the high-security Green Zone.

A stream of men in military fatigues, as well as some women, marched through those checkpoints to the embassy's walls with no apparent reaction from Iraqi security forces.

Protesters threw rocks and wrenched security cameras off the walls.

US marines inside the compound fired tear gas and flash bangs to disperse the crowd, which had ignored calls over megaphones to back away from the embassy.

The demonstrators waved flags in support of the Hashed al-Shaabi, a mostly Shiite network of Iraqi armed groups that has received training and weapons from powerful neighbor Iran.

On Sunday, at least 25 fighters from a hardline Hashed faction known as Kataeb Hezbollah (Hezbollah Brigades) were killed in US air strikes on a western base.

The strikes were in response to a 36-rocket attack last week that killed one US contractor working at an Iraqi base, the latest in a string of attacks on areas where American troops are deployed.

They have not been claimed but US security assessments have largely blamed them on Kataeb Hezbollah.

The United States has around 5,200 troops deployed across Iraq to train security forces and prevent any resurgence of the Islamic State jihadist group.

After the strikes, Kataeb Hezbollah and other pro-Iran factions in the Hashed demanded the "withdrawal of the American enemy".

Protesters echoed those calls on Tuesday, carrying posters reading: "Parliament should oust US troops, or else we will."

Others carried banners with US President Donald Trump's face crossed out.

They scrawled "No to America!" and "Shut by order of the Resistance Brigades" on the embassy gates.

Many set up tents to begin an indefinite sit-in.

Among those at the protests were Iraq's National Security Adviser Faleh al-Fayyadh -- who is also the head of the Hashed -- and other top Hashed officials.

Iraq had long feared being caught in the middle of escalating tensions between its two main allies the United States and Iran, after Washington pulled out of a landmark nuclear deal with Tehran last year.

Since the weekend strikes, ties have been increasingly strained.

Iraq's government, acting in a caretaker capacity after prime minister Adel Abdel Mahdi resigned in the face of street protests, threatened to summon the American ambassador.

"American forces acted on their political priorities, not those of Iraqis," it said.

Dozens of lawmakers called on the government to review an agreement allowing the deployment of US soldiers in the country, saying the strikes amount to a violation of sovereignty that renders the pact obsolete.

The United States, meanwhile, accused Iraq of failing to "protect" US interests in the country.

US defense officials have told AFP that pro-Iran factions now pose a greater threat than IS because of the repeated rocket attacks.

Abdel Mahdi said he had been forewarned by US Defense Secretary Mark Esper that the US would carry out the air strikes.

"He told me the United States would strike the Hezbollah Brigades and I told him it would be a very dangerous act that could lead to an escalation," Abdel Mahdi said.

The premier tendered his resignation in November after two months of anti-government rallies.

The Covid-19 pandemic took a deadly toll on adults in the United States for two years while largely sparing children from the dire statistics.

But the rapid spread of the Omicron variant led to record pediatric infections and hospitalizations in the country, and anti-vaccination misinformation that tells parents the shots are dangerous is adding to the risk.