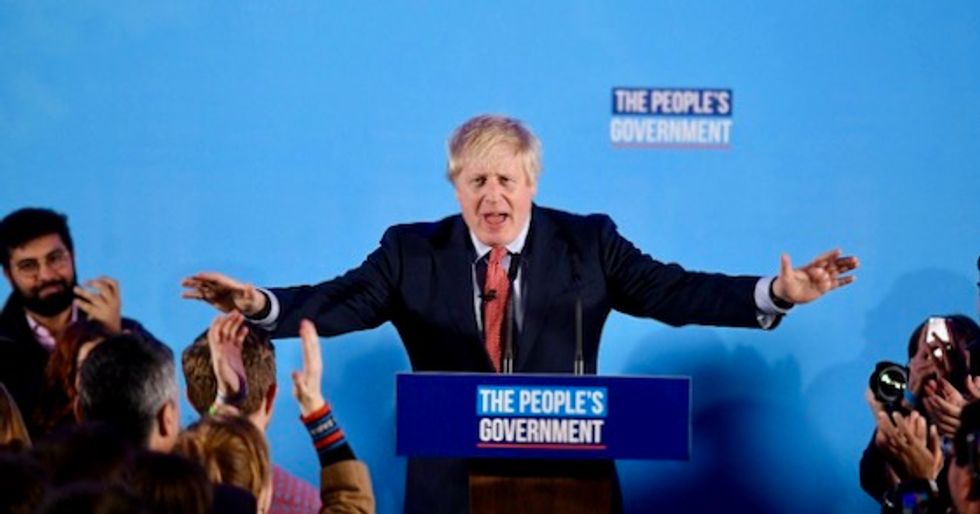 Britain's Prime Minister and leader of the Conservative Party, Boris Johnson, speaks during a campaign event to celebrate the result of the general election in central London on December 13, 2019. (Photo by Daniel Leal-Olivas/AFP via Getty Images)

"We will defend our public services—especially the NHS—from attempts to degrade or destroy them, and support, as well as we are able, the overworked heroes who keep them afloat."

After U.K. Prime Minister Boris Johnson and his Tory party won a strong majority in the general election Thursday, British progressives mourned the "utterly devastating" result and geared up for a fight to defend the National Health Service from more right-wing budget cuts and privatization efforts.

"People running our NHS are crying out for more help, begging people not to vote Conservative due to the constant cuts," tweeted London-based activist Ellen Rose. "Seems they were ignored by the people they try to save every day."

"The fight goes on. We need to occupy every single space with our politics louder and stronger. Protest the privatization of the NHS, defend migrants, fight evictions, take care of your neighbors."

Following his victory, which is expected to give the Conservatives a 75-seat majority, Johnson declared that the election result has granted him "a powerful new mandate to get Brexit done."

Just two weeks before the vote, U.K. Labour leader Jeremy Corbyn unveiled over 450 pages of documents that he said showed a Tory plan to privatize the NHS in negotiations with the U.S. over a possible post-Brexit trade pact.

"Mega-corporations see Johnson's alliance with Trump as a chance to make billions from the illness and sickness of people in this country," said Corbyn. "And if the Conservatives have their way and this deal goes forward, the changes I've revealed will be almost irreversible."

As Common Dreams reported, documents obtained by the Daily Mirror last month showed that the U.S. pharmaceutical industry is lobbying trade negotiators to open the British drug market as part of any new trade agreement.

In a tweet Friday morning, U.S. President Donald Trump congratulated Johnson on his "great win"and said "Britain and the United States will now be free to strike a massive new Trade Deal after Brexit."

"This deal has the potential to be far bigger and more lucrative than any deal that could be made with the E.U.," Trump added. "Celebrate Boris!"

Trump has previously insisted that "everything" will be on the table in trade negotiations with the U.K., including the NHS.

In a series of tweets early Friday, Guardian columnist George Monbiot said "mass resistance" and an organized movement will be necessary to protect the people and programs the U.K.'s right-wing government is likely to target.

"We will defend our public services—especially the NHS—from attempts to degrade or destroy them, and support, as well as we are able, the overworked heroes who keep them afloat," said Monbiot. "We will divide up the tasks, but always in the knowledge that we're working together. Love and courage to you all."

"The fight goes on," added activist Hasan Patel. "We need to occupy every single space with our politics louder and stronger. Protest the privatization of the NHS, defend migrants, fight evictions, take care of your neighbors."

Supporters of the Medicare for All in the United States expressed solidarity with British progressives following Thursday's election.

"Our friends in the U.K. are about to have to fight like hell to defend their NHS," said Jacobin's Meagan Day. "We Americans who are fighting for Medicare for All will stand with you."