Calls grow to revoke White House press pass for Anti-Semitic pro-Trump pastor -- but why did he have one to begin with? 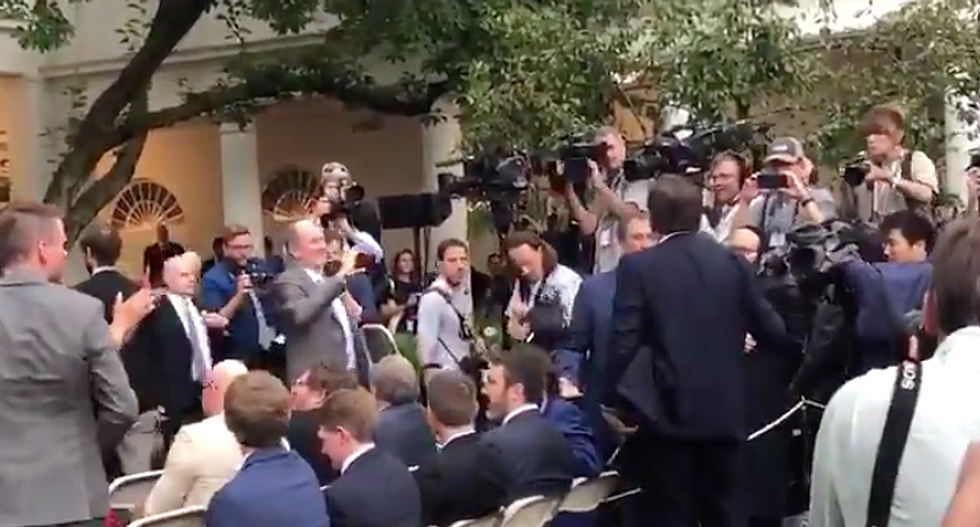 Two Democratic members of the U.S. House of Representatives, Rep. Ted Deutch of Florida and Rep. Elaine Luria of Virginia, are calling for the Trump White House to revoke the press credentials of Florida-based pastor and TruNews founder Rick Wiles following his latest anti-Semitic rant. In a video posted on TruNews’ YouTube channel on November 22, the far-right evangelist described Democratic efforts to impeach President Donald Trump as a “Jew coup” and claimed that Jews will “kill millions of Christians” if they succeed in removing Trump from office. The remarks were so offensive that YouTube shut down the TruNews channel as a terms of service violation — and Deutch and Luria, in a letter to Acting White House Chief of Staff Mick Mulvaney, asserted that the White House should “firmly reject anti-Semitic ideas, language” by banning Wiles from all future White House media events.

Wiles’ unsavory “Jew coup” rant was only one of many examples of the type of hatred that he has been espousing in the 21-year history of TruNews, which he founded in 1998. Here are some of the most appalling moments in the Rick Wiles Hall of Shame.

Although Wiles considers himself a Donald Trump supporter, that hasn’t stopped him from demonizing the president’s daughter, Ivanka Trump, or her husband, Jared Kushner. The president was raised Presbyterian, but his daughter is a convert to Judaism — which infuriates Wiles. And as Wiles sees it, Ivanka Trump is undermining her father’s presidency. In 2017, Wiles has described Ivanka Trump as a “Kabbalah-practicing evil woman whispering evil things in the ear of her father.” The pastor went on to say that Ivanka Trump and Kushner “are cleaning out the White House to surround President Trump with their Kabbala practitioners, and the only advice he is going to get will be from people who are evil.”

Throughout Barack Obama’s presidency, far-right conspiracy theorists argued that he was: (1) born in Kenya rather than the United States, and (2) a secret Muslim. And even though Obama and his wife, Michelle Obama, have a long history of going to church as Mainline Protestants, Wiles never believed that the former president was really a Christian. Wiles, who is as anti-Islam as he is anti-Semitic and anti-gay, often described Barack Obama as the United States’ “jihadist in chief.”

Wiles is hardly the only person who has promoted conspiracy theories about the 1963 assassination of President John F. Kennedy. But while some JFK conspiracy theories are nothing more than goofy eccentricity — for example, the late Sen. Arlen Specter’s bizarre Single Bullet Theory — Wiles blames Jews for the killing. Earlier this year, Wiles claimed that JFK was assassinated by what he calls the “Jewish mafia.” The Israeli government, Wiles claims, wanted JFK dead.

4. Wiles claimed that Jews were determined to outlaw Christianity

The very fact that so many Jews engage in interfaith events with Catholics and Mainline Protestants shows that they embrace a live-and-let-live approach to religion and have no desire to convert Christians who are happy being Christians. When Ivanka Trump, for example, converted to Judaism and married a Jewish man, no one was twisting her arm. But as Wiles sees it, Jews in general are carrying out a war on Christianity. In March, Wiles railed against the annual conference of the American Israel Public Affairs Committee (AIPAC), which he viewed as an anti-Christian event.