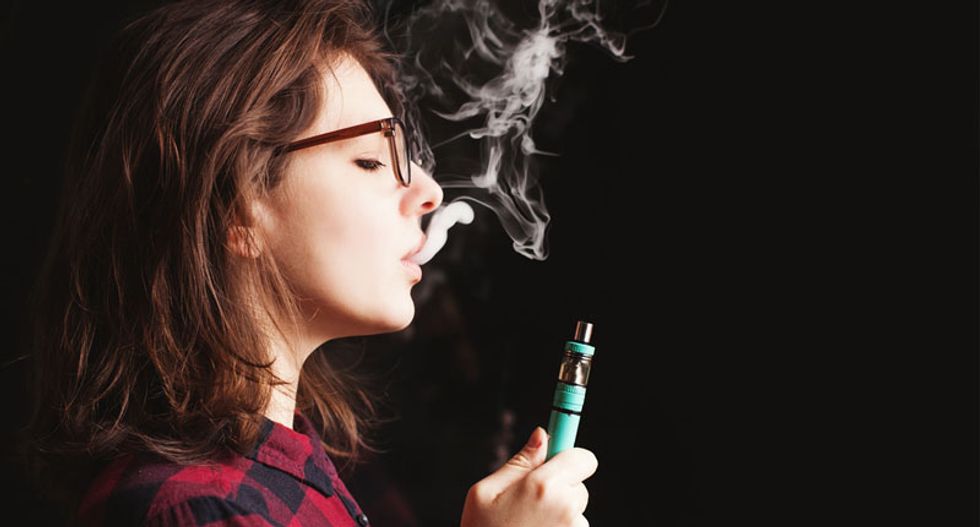 The results of the research, published in the American Journal of Preventive Medicine, are unrelated to the recent outbreak of an acute lung disease that has killed more than 50 people and has been linked to a substance commonly added to vaping products containing THC, the psychoactive component of cannabis.

Scientists at UC San Francisco examined publicly available data that tracked e-cigarette and tobacco habits as well as new lung disease diagnoses in over 32,000 American adults from 2013 to 2016.

They found that current and former e-cigarette users were 1.3 times more likely to develop chronic lung disease, while tobacco smokers increased their risk by a factor of 2.6.

For people who both smoked and vaped, the risks of developing lung disease more than tripled.

"What we found is that for e-cigarette users, the odds of developing lung disease increased by about a third, even after controlling for their tobacco use and their clinical and demographic information," said senior author Stanton Glantz, a UCSF professor of medicine.

"We concluded that e-cigarettes are harmful on their own, and the effects are independent of smoking conventional tobacco," he added.

The paper did not offer a new biological explanation for how vaping causes such harm, but cited earlier physiological studies in both animals and humans that have found that e-cigarettes suppress the immune system and increase the levels of stress-related proteins in the lung.

There have been several earlier population studies that found an association between e-cigarette use and lung disease at a single point in time, but it was impossible to determine whether the illnesses were caused by e-cigarettes or if people with lung disease were more likely to vape.

The authors of the new study wrote that by starting with people who had no prior history of lung disease and then taking account of their use of e-cigarettes and smoking, they could identify a stronger causal link.

Vaping advocates contend that e-cigarettes offer people addicted to smoking a less harmful alternative, but according to Gantz, most of the participants in the nationally representative sample both smoked and vaped.

"Switching from conventional cigarettes to e-cigarettes exclusively could reduce the risk of lung disease, but very few people do it," he said. "For most smokers, they simply add e-cigarettes and become dual users, significantly increasing their risk of developing lung disease above just smoking."