‘Flashback much?’: Senator mocked for saying IG report made him feel like he had ‘dropped acid’ 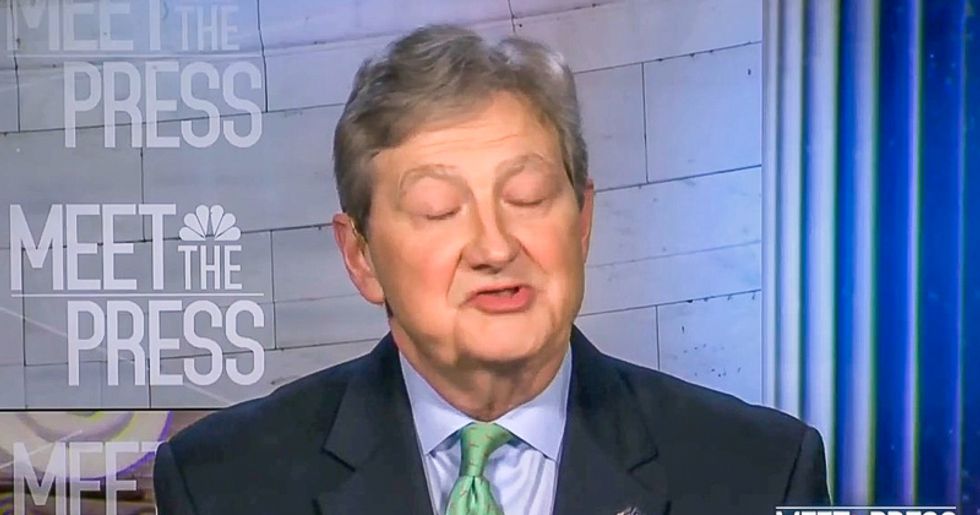 “About 25 percent of the way through it I thought I dropped acid. It’s surreal.”

A prominent Republican Senator is getting his own special due process on social media after using his precious time to question U.S. Dept. of Justice Inspector General Michael Horowitz by saying reading the 434 page report on the FBI's Russia investigation was like dropping acid.

U.S. Senator John Kennedy (R-LA) admitted to Horowitz on Wednesday that he had not finished reading the lengthy document but was about 70 percent done. He also appeared to be trying to make the infractions about FISA warrants committed by FBI agents to be seen as unprecedented and historically offensive, in an attempt to serve President Donald Trump by damaging the reputation of the FBI.

Someone can be heard laughing in the background.

Kennedy chose to focus on the misconduct by the FBI agents instead of on the actual investigation, which the Inspector General found to be warranted: that is, opening up the Russia probe to determine not only how Putin and his cronies attacked the U.S. election but to what extent any Trump campaign officials may have been involved.

The Louisiana Republican Senator was not done. He made clear someone would have to pay for the misdeeds.

Apparently it would not matter to Kennedy who.

“I hope you’ll tell your colleagues at the FBI that we appreciate their work, but this has got to be fixed. At minimum someone’s got to be fired,” he announced.

Many were perplexed and shared their concerns about Sen. Kennedy on social media.

So far in his line of questioning, Sen. John Kennedy has: -complimented IG on the durability of his kidneys -said… https://t.co/QnHRtVGZDj
— Chuck Ross (@Chuck Ross)1576097885.0

WHO KNEW that Rep. Sen. John Kennedy was once a Flower Child? He was caught reminiscing during the senate hearing… https://t.co/ZAEUEsfCgp
— Dave Stancliff (@Dave Stancliff)1576099341.0