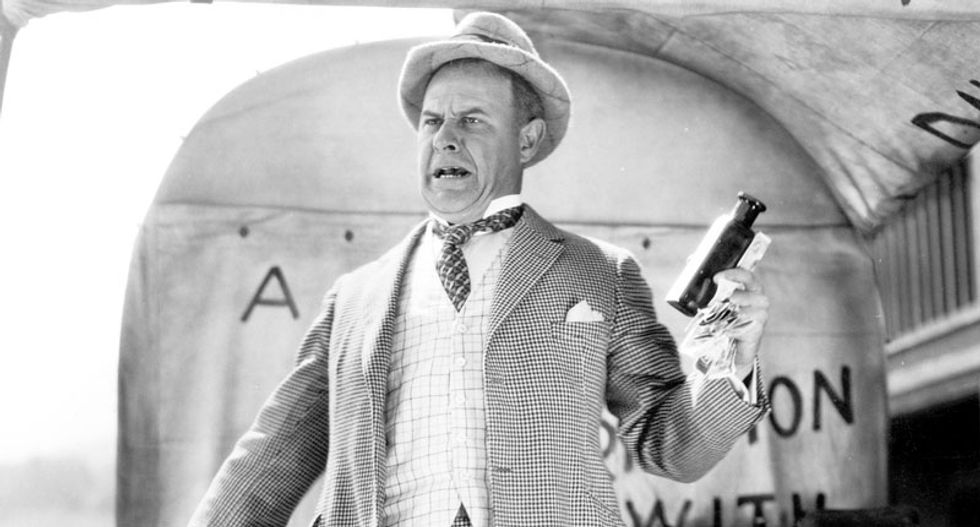 Former diplomat and Reagan adviser Alan Keyes is a well-known gadfly who has run multiple times for president and for Senate, most famously against future President Barack Obama in 2004.

But lately, according to The Daily Beast, he has been involved in a different pursuit: the promotion of a dangerous pseudoscience scam known as the "Miracle Mineral Solution," or MMS.

The substance, which is actually just the powerful bleach chlorine dioxide, is supposedly a cure for everything from viral infections to infertility, and there was even a cultlike church known as the Genesis II Church of Health and Healing, that promoted it as a gift from God. MMS has particularly taken root in developing countries like Uganda, but it also has a following in the United States, and many autistic children have been forced to drink it. Versions of this scam have even been promoted on Amazon.

By some estimates, MMS consumption has poisoned over 2,000 people in the United States since 2014, with 50 "life-threatening" reactions involving blood cell damage and organ failure, and eight deaths — including the wife of Doug Nash, the mayor of San Juan Capistrano, California.

Despite all of this, IAMtv, a conservative online channel fronted by Keyes, is now promoting the use of MMS, and Keyes himself is appearing in broadcasts promoting its use, including some which feature bottles branded by the Genesis II Church on his desk.

"I get to use my 'I work with Alan Keyes,'" IAMtv host Bob Sisson told The Daily Beast., miming a fishing rod as he pretended to reel someone in with Keyes’ name. "Which is sorta cool because I met [creationist activist] Ken Ham a week ago; I met the governor of Kentucky, Matt Bevin, a super guy; met Governor Bill Lee here in Tennessee. Gonna meet Trump, it’s only a matter of time. President Trump’s gonna invite us up there, when he finds out about this stuff."

In one broadcast in October, Sisson and Keyes talked about MMS as an intervention against the pharmaceutical industry by God.

"I'm convinced that chlorine dioxide is going to be what God uses to bring down Big Pharma,” said Sisson. "But I do know that that it will detox your body and then God himself will heal you. And we're finding in like in Uganda, curing malaria and poisoning and diabetes and AIDS by the way. It's amazing." Keyes agreed, saying that was "why I was so interested in MMS and going to Uganda so far ... There will be no excuse for pretending that you should price it at hundreds of dollars a dose so that people can make billions off of it."