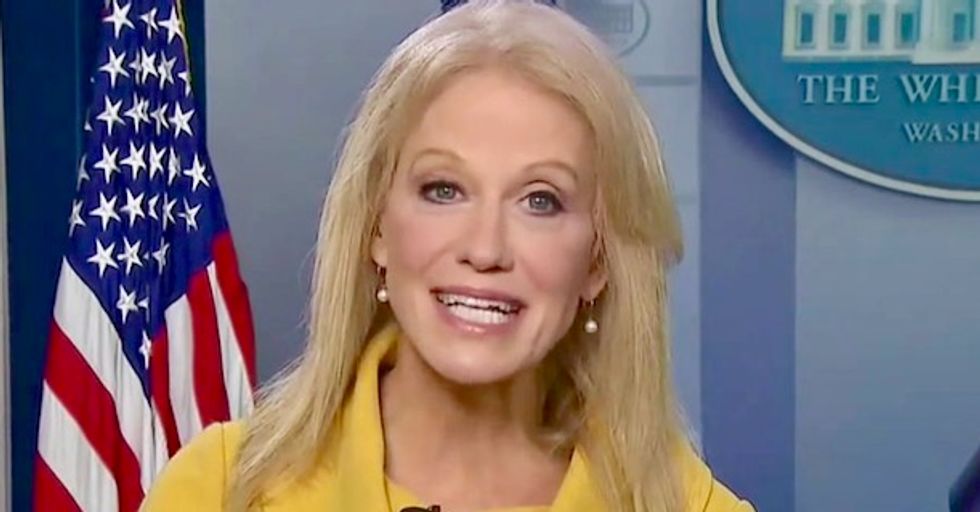 "The White House counsel made very clear this is an illegitimate and unconstitutional process and we maintain that. 12 witnesses, 30 hours later there are no bombshells, a lot of bombs. I keep hearing all these analogies and comparisons to the Nixon impeachment and the Clinton impeachment. The fact is there was evidence of crimes there, direct evidence,” Conway told Fox News' Bill Hemmer on Monday, as Mediaite reported.

Conway reiterated the White House's announcement that neither President Trump nor any of his attorneys will accept Judiciary Committee Chairman Jerry Nadler's offer to appear during this week's hearing.

“Why would we participate in an exercise they have three witnesses, we can have one and it is constitutional law. Does Adam Schiff want to testify?” Conway said from the usually-dormant White House press briefing room.

"We see no crime here," Conway claimed. Countless legal and constitutional law experts disagree. "We're still looking for a crime – let alone a high crime and misdemeanor that would justify impeaching and removing a democratically legitimately elected president from office."

She went on to claim congressional Democrats were "trying to impeach" Trump even before he was inaugurated.

Trump-loving lawmakers must be investigated for assisting Capitol rioters -- because they clearly had inside help: columnist

The U.S. Department of Justice must investigate reports that members of Congress and their staffers had extensive contacts with two organizers of the "Stop the Steal" rallies that preceded the Jan. 6 insurrection.

The organizers claim they met directly with Reps. Marjorie Taylor Greene (R-GA) and Paul Gosar (R-AZ) and staffers for Reps. Andy Biggs (R-AZ), Lauren Boebert (R-CO), Mo Brooks (R-AL), Madison Cawthorne (R-NC) and Louie Gohmert (R-TX), and justice correspondent Elie Mystal wrote in The Nation that the Justice Department must determine what role any of them might have played in coordinating the deadly riot.

According to a report from the Catholic News Agency, the investigation and indictment of Rep. Jeff Fortenberry (R-NE) for accepting illegal campaign contributions has claimed a victim with the resignation of the head of a Catholic advocacy group.

One week ago Fortenberry was indicted by the Justice Department after he allegedly lied to the FBI about campaign contributions from Nigerian-Lebanese billionaire Gilbert Chagoury. According to the indictment, the GOP lawmaker, "knowingly and willfully falsified, concealed, and covered up by trick, scheme, and device material facts" related to the case.

When Justice Amy Coney Barrett was sworn into the Supreme Court just days before the 2020 elections, conservatives lauded her installation as a victory that would define Donald Trump's presidency and liberals lamented it as a death knell for abortion rights.