'Let's bring Rumsfeld in': Congressman calls for hearings on US officials who lied to American people about endless Afghan war 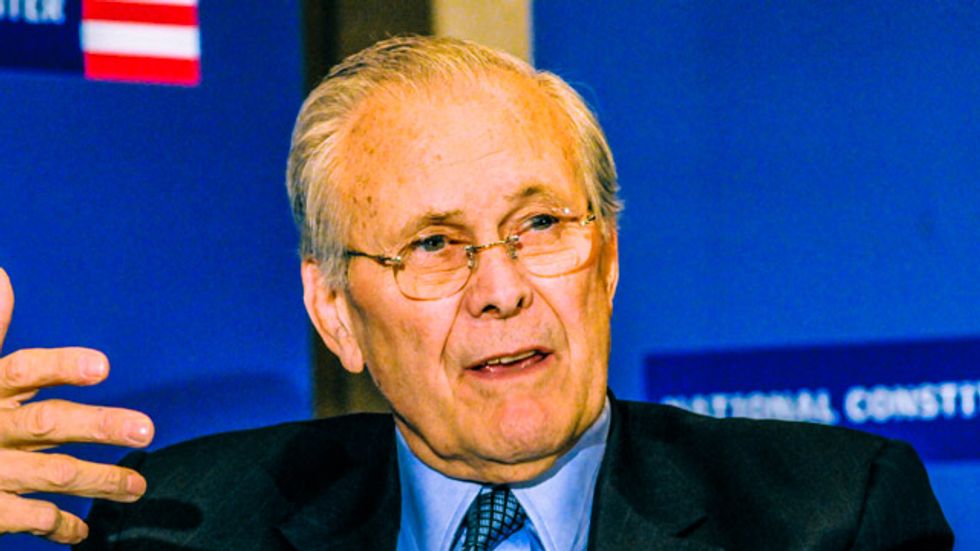 "The bottom line is that top military officials and civilian officials have known that the Afghan war has been has been unwinnable and have been misleading the American public for 20 years."

Rep. Ro Khanna on Wednesday said that The Washington Post's explosive investigation the "Afghanistan Papers" showed the need for a congressional hearing and that former Pentagon chief Donald Rumsfeld should be among the current and former top officials called in for a reckoning before the American public.

Khanna (D-Calif.) made the comments at a House Armed Services Committee hearing. Hebegan addressing Secretary of Defense Mark Esper by summing up the Post's report from Monday.

"The bottom line is that top military officials and civilian officials have known that the Afghan war has been has been unwinnable and have been misleading the American public for 20 years," Khanna said. "Your predecessor Secretary Rumsfeld was quoted there as saying, 'I have no visibility into who the bad guys are.'"

"Are you embarrassed by Secretary Rumsfeld comment and the other people quoted, and do you believe they owe the American public an explanation and an apology?" Khanna asked Esper.

Esper said it was up to the committee on whether or not to call a hearing. "But I do know this much. The story spanned multiple administrations, multiple uniformed and civilian officials, and I think it's good to look back."

Yet, Esper said, "I think at this point where I'm looking is forward. And forward tells me... the path to success, the win, is a political agreement between the parties on the ground."

"But don't you think we have to have some accountability so we don't make the same mistake again?" asked Khanna. "Would you support this committee holding hearings on the Afghan Papers and calling in front of Congress every official who has misled the American public about whether this war was winnable in all or not? With 2,400 American soldiers dead, 775,000 Americans deployed, dont you think people owe this country an explanation?"

Khanna then said to committee chairman Rep. Adam Smith (D-Wash.), "I would request that this committee hold hearing on the Afghan Papers and call before Congress with subpoena every person who has misled this country."

"And just like in the Pentagon Papers," Khanna continued, "I think that should be one of our highest priorities... examining what has come out in that bombshell report."

Smith responded by saying he believes "it's appropriate to have hearing," but said that calling "every single witness... would not be a productive of this committee's time."

Khanna shared a portion of the exchange on Twitter, adding, "Let's bring Rumsfeld in."

The California Democrat's remarks at the hearing echo comments he made earlier to The Hill.

"Subpoena all of the people who were mentioned and have them account and explain to the American people in some cases why they lied and in other cases why they were utterly incompetent," Khanna told the outlet Wednesday.

The Post investigation had already motivated Sen. Kirsten Gillibrand, the ranking Member of the Senate Armed Services Personnel Subcommittee, to call for a public hearing "to address these deeply concerning revelations about the Afghan war."

In a letter sent Monday to Senate Armed Services Committee chair Sen. James Inhofe (R-Okla.) and ranking member Sen. Jack Reed (D-R.I.), Gillibrand wrote, "it is deeply troubling to read a report of interviews with U.S. government officials that appear to contradict the many assurances we have heard at committee hearings that the continuing war in Afghanistan has a coherent strategy and an end in sight."