Our addiction to stuff: How Walmart enables us to destroy the planet 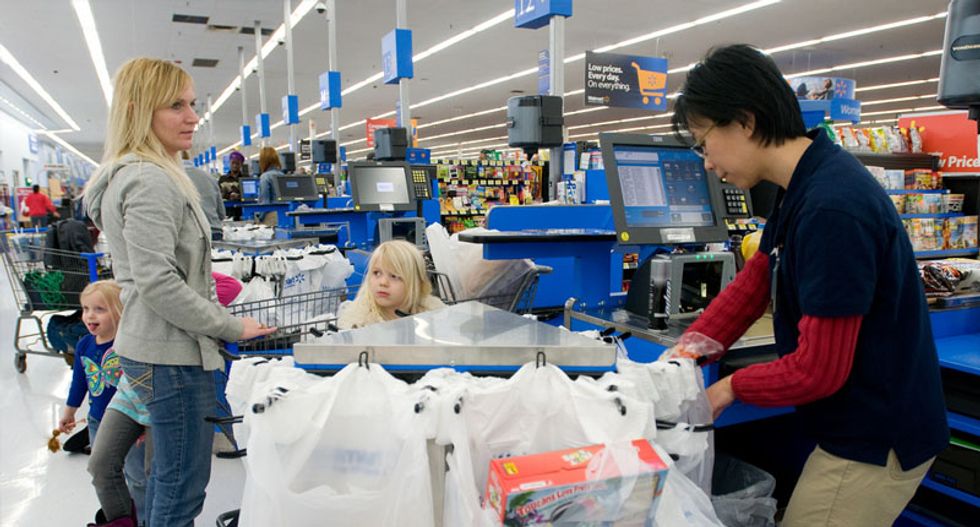 Cashier bags up a grocery purchases at Walmart (Walmart/Flickr)

‘Tis the season when shoppers fill the malls, and UPS and FedEx trucks crowd the roads.

The amount of “stuff” that moves in and out of households during the Christmas season is staggering. According to the business consulting firm Deloitte, the average American household will spend about US$1,500 during the holiday season.

People will fill their living rooms with boxes, only to discard the packaging — and some gifts — the morning after. Many of us can simply look inside our own closets to see the skeletons of Christmas’ past.

We are addicted to buying stuff during these holidays.

If we are the addicts, then who are the drug dealers? They are the retailers. Retailers “push” their wares, enabling a habit that is destroying the planet and creating mountains of landfill.

’Tis the season to redesign and reduce our waste

Many retailers make gestures towards sustainable development. They claim to be reducing their own waste or that of their suppliers, but this is simply putting lipstick on a pig. The real harm to the planet is in the stuff they sell.

The largest company in the world, based on revenues, is Walmart. Its sells US$514 billion of stuff annually. That amount of stuff is staggering.

Walmart claims to be committed to sustainability. It just launched Project Gigaton, which will “avoid one billion metric tons (a gigaton) of greenhouse gases from the global value chain by 2030.” This goal is laudable. Walmart seeks to divert waste from its own operations and from its suppliers’ by reducing energy and packaging. 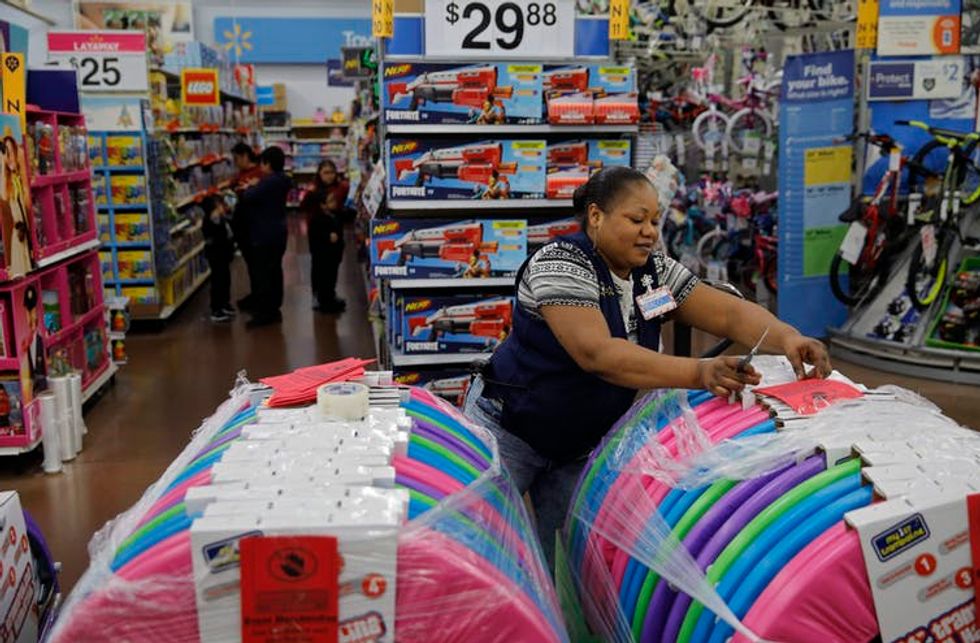 As the world’s largest company by revenue, Walmart has more than 60,000 direct suppliers.

With over 60,000 direct suppliers and at least double that many that want to supply to Walmart, the giant retailer’s reach is vast. If Walmart asks something of its suppliers, it can force significant product changes within and across markets. For example, Walmart’s initiatives led to concentrated laundry detergents and the default for personal computers to enter sleeping mode.

Pressuring suppliers is seen as best practice among retailers. Even the fast fashion houses like H&M and Zara are pressuring their suppliers.

But focusing only on suppliers is a distraction. Upstream waste production isn’t the problem, it’s the downstream stuff that retailers cajole, coax and push us into buying that’s polluting the land and clogging the oceans.

It’s simple arithmetic. The efficiency ratio may be getting slightly smaller, but the multiplier (the amount of stuff) keeps getting significantly larger. The drug dealer may be offering cleaner drugs, but they are growing our addiction.

So, why doesn’t Walmart fix the real problem?

By working on suppliers, Walmart’s costs go down. For example, concentrated detergents cost less to transport and take less shelf space. What’s good for its suppliers is good for Walmart — the proverbial win-win.

An incentive to sell more

However, Walmart does not want to work on reducing the stuff it sells to consumers, because doing so reduces sales, which reduces the share price. So Walmart, like all retailers, seeks to sell more and more.

What’s good for Walmart is bad for the planet and that’s ultimately bad for consumers — it’s a win-lose.

Selling stuff that clogs landfills and oceans is clearly the problem. But there is another part of the issue that is more subtle, yet may be even more important.

By pressuring suppliers to clean up their production processes, Walmart may inadvertently be hindering — not helping — sustainable development.

Sustainable development is enabled through the circular economy, which requires suppliers to produce stuff that lasts longer, biodegrades faster or can be repurposed more efficiently. But transitioning into a more circular economy may not always be economically valuable for retailers.

On upstream impacts, plastic wins over paper. Plastic uses less carbon to produce and fewer greenhouse gas emissions to transport. However, on downstream impacts, paper is the clear winner. If properly diverted from landfills, paper will biodegrade in less than a year rather than the hundreds of years that it takes for plastic. By selecting plastics over paper upstream prevents us from addressing the issue downstream.

What can a responsible consumer do?

Most consumers believe they need to “walk with their feet.” So they threaten retailers to take their business elsewhere if the retailer doesn’t take more action on sustainability. It’s like the drug addict threatening to buy their drugs from another drug dealer. It solves the immediate problem, but the drug addict still needs drugs and the drug dealer is still selling them — just different buyers and sellers.

Instead, consumers need to demand retailers to focus on the downstream impacts, not just the upstream — what is often called “extended producer responsibility.” Walmart, along with other retailers, must be held responsible for taking back the stuff that they sell or working with suppliers and other retailers so they can. 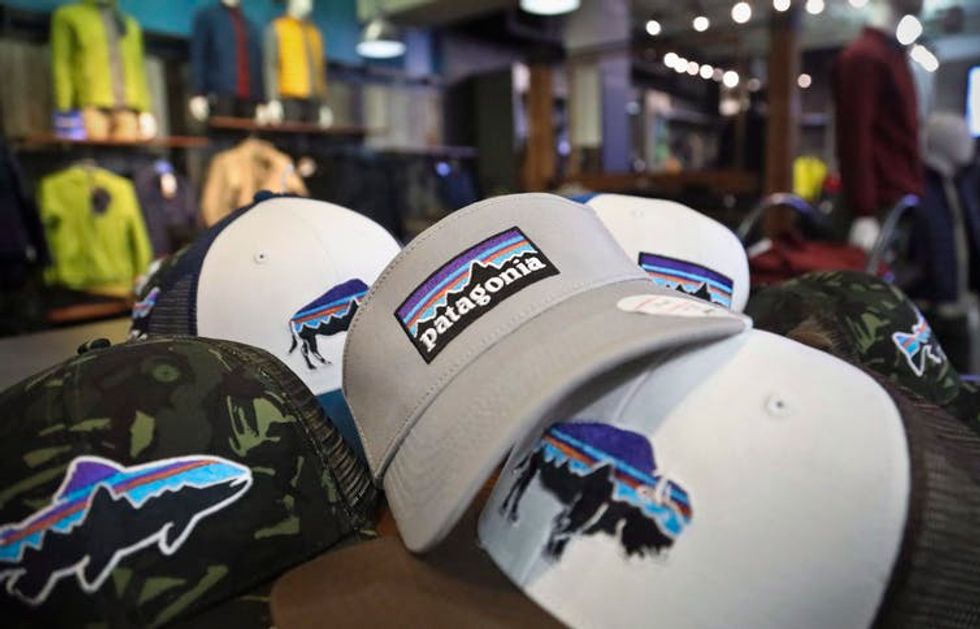 Patagonia, the outdoor gear company, has started a unique eco-friendly program where it will take back its used clothing from customers, fix them and resell them.

There are only a few examples of retailers that are taking this step. Ikea is the largest furniture retailer in the U.S, with 11.3 per cent of the market. It will now buy back used furniture from consumers for in-store credit. Patagonia has also started a new business called Worn Wear, which will take back worn clothes, fix them and resell them. In so doing, Patagonia learns about the flaws in their clothing so they can manufacture even more durable clothing.

Imagine if consumers could take their used packaging and toys back to Walmart. The mountains of waste that would pile up in Walmart stores would demand action. And that would assure the health of our planet, not just at Christmas, but forever.