Pompeo and Mulvaney are neck-deep in Trump's corruption and that's why they're ducking Congress: Sen. Angus King 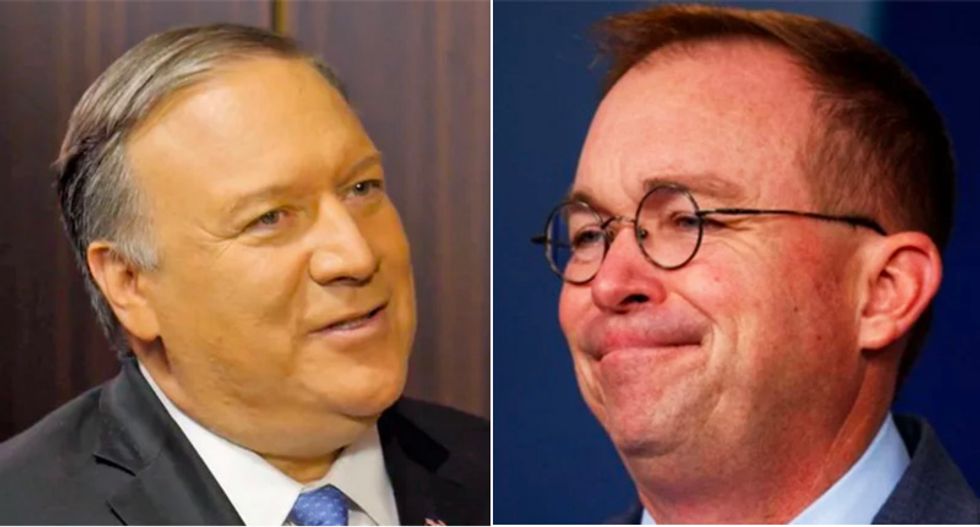 In a brutally blunt op-ed for USA Today, Maine Senator Angus King (I) claimed that multiple Trump Administration officials are likely neck-deep in Donald Trump's Ukraine scandal -- or helping to cover it up -- and that is why they won't put themselves on the line and testify before congressional investigators.

Using a Sherlock Holmes analogy, King stated that the reluctance of "acting chief of staff Mick Mulvaney, Secretary of State Mike Pompeo, Energy Secretary Rick Perry, former national security adviser John Bolton and probably at least a dozen White House and National Security Council staffers" to face investigators is likely an admission that a crime -- or crimes -- have been committed.

"One of Sherlock Holmes’ most famous cases was solved when a normally noisy dog was silent the night of the crime, leading the famous detective to the deduction that it must have been an inside job — the dog knew the intruder," King wrote. "Those not barking today are the numerous Trump administration officials who are strangely silent when a few short statements (under oath) could go a long way toward exonerating the president from the charge of using the powers of his office for personal gain."

As King sees it -- if the president and all the president's men are innocent, and no crimes have been committed -- they should be more than willing to tell their side of the story.

But that is not the case.

"All could clear up, one way or another, the essential question of whether the president was interested in corruption generally in Ukraine last summer, or whether the withholding of military aid and the dangling of a White House meeting was motivated by his personal and political interest in publicized investigations of the 2016 election and the activities of one of his principal rivals. And this would be direct evidence, which no one can call hearsay," King wrote, before adding, "Because it would be so easy for these people to clear the president, it’s hard to escape the conclusion that their silence is less about vague assertions of executive privilege (which isn’t available to cover-up wrongdoing, in any case) and more about not wanting to testify under oath as to what actually happened."

With the courts still looking at whether Congress can compel White House officials to appear and testify, King asserts Trump's aides have no case.

"I know of no legal proceeding in any forum where the alleged wrongdoer controls the availability of material witnesses," King, who once served as counsel to the Senate, wrote. "In most situations, in fact, the very attempt to do so is a crime in itself. If the president is innocent, he should want — no, he should demand — that the above mentioned officials appear in a public forum, under oath and subject to examination, to set the matter straight, as soon as possible."

King served notice that it is not too late for White House officials to testify voluntarily, and warned that, as a U.S. senator, he will be part of the jury that will be judging Trump.

"As a potential juror, my ultimate judgement will be based on the facts as presented, but also, at least in part, upon whether we have this important testimony — and if we don’t, whether it was withheld from us deliberately," he wrote.