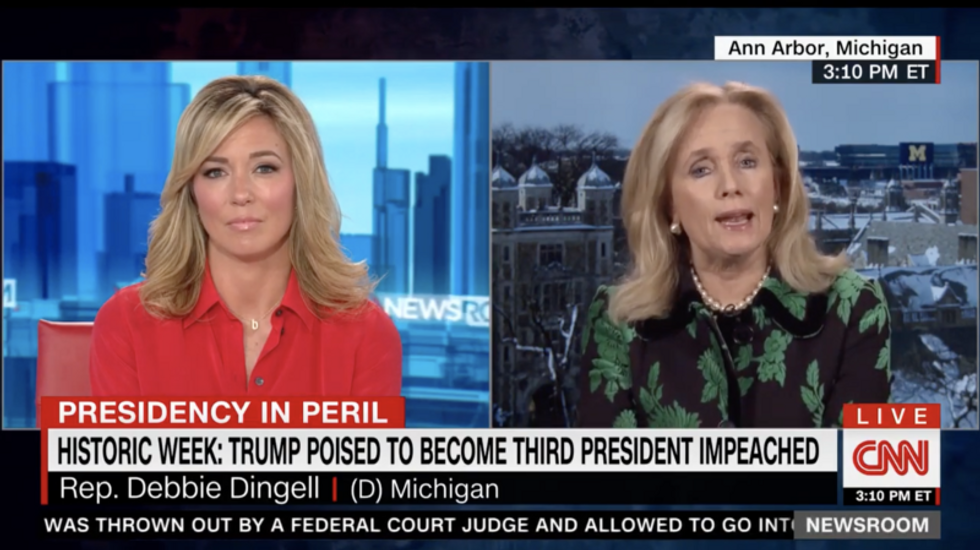 Speaking on CNN this Monday, Michigan Rep. Debbie Dingell (D-12th District) said that "when a President uses his office for his own private, personal political gain, that's disturbing."

While choosing to not divulge how she'll vote on the impeachment of President Trump, Dingell reminded viewers that she was a direct target of President Trump's attacks, who invoked the memory of her dead husband John Dingell in a tweet this Saturday.

In the tweet, Trump lashed out at Dingell after she appeared on TV to discuss the Democrats' impeachment effort against him, saying that the "last time I spoke to Debbie Dingell was her call thanking me for granting top memorial and funeral service honors for her then just departed husband, long time Congressman John Dingell. Now I watch her ripping me as part of the Democrats Impeachment Hoax. Really pathetic!"

Speaking to CNN's Brooke Baldwin on Monday, Dingell defended her late husband, saying that she's having a "hard time" after his loss, adding that she wasn't so sure what about her interview triggered Trump's rage.

"I've talked to several people who've looked at that interview ... and they're like, 'You were really measured.'"

Dingell said that she favors a more cautious approach to impeachment, "but when a President Trump-appointed  Inspector General says, 'There's a potential threat to our national security,' you've gotta listen, you've got a responsibility to pay attention."