Russia's only aircraft carrier bursts into flames while sitting in port 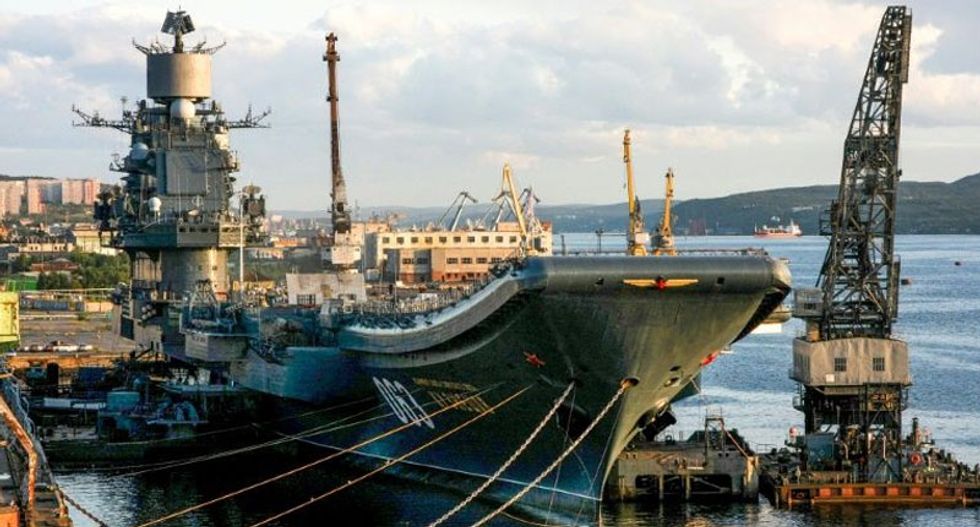 Russia's only aircraft carrier caught fire Thursday while undergoing maintenance in an Arctic shipyard, news agencies reported, raising concerns for the future of the navy flagship.

Russia's Interfax, RIA Novosti and TASS news agencies quoted local emergency services as saying at least 10 people had been injured in the blaze, with six reported to be in intensive care.

RIA Novosti quoted a source in the Zvezdochka shipyard as saying the fire broke out during welding operations. More than 400 people were on board when it erupted, TASS quoted a Zvezdochka spokesman as saying.

Interfax reported that the fire had spread over an area of about 600 square metres (6,500 square feet) and quoted a source describing the blaze as "very serious".

Russia's industry ministry told AFP that once the fire is put out, officials will participate in a probe and damage estimates.

The Admiral Kuznetsov became fully operational in 1995 and is the flagship of the Russian navy.

The repairs were expected to be completed by the end of 2020, with the warship rejoining the navy in 2021.

The vessel was deployed to the Mediterranean in 2016 and early 2017 to strike targets in Syria and help Moscow ally President Bashar al-Assad recapture rebel-held areas in the war-torn country.

The ship headed a naval group off the Syrian coast, with fighters from the carrier hitting more than 1,200 targets during its mission.

It also stopped off the coast of Libya in January 2017 and took on board military strongman Khalifa Haftar, who Russia has reportedly backed in the country's long-running civil conflict.

Britain's then-defence minister Michael Fallon dubbed the Admiral Kuznetsov Russia's "ship of shame" for its role in the Syria conflict.

The ship suffered several mishaps during the mission, including the crash of a Sukhoi fighter jet into the sea after a malfunction as it tried to land on the carrier.

The repairs and upgrades -- with a reported cost of up to 62 billion rubles ($1 billion/880 million euros) -- were to focus on the ship's power plant and onboard electronic systems.

Last year's collapse of the crane on the ship's deck, which killed one worker and caused major damage, raised concerns the work would be delayed and the carrier out of commission beyond the 2021 deadline.

Russia's navy has been battling problems with state financing, ageing shipyards, and delays in fulfilling orders for new ships.

In the last six years, three fires have been reported on submarines under repair.

The Admiral Kuznetsov was meant to be the first of a new fleet of Soviet aircraft carriers but the Russian navy has struggled with a massive drop in funding since the 1991 collapse of the Soviet Union.

The USSR had five aircraft carriers at the height of its power.