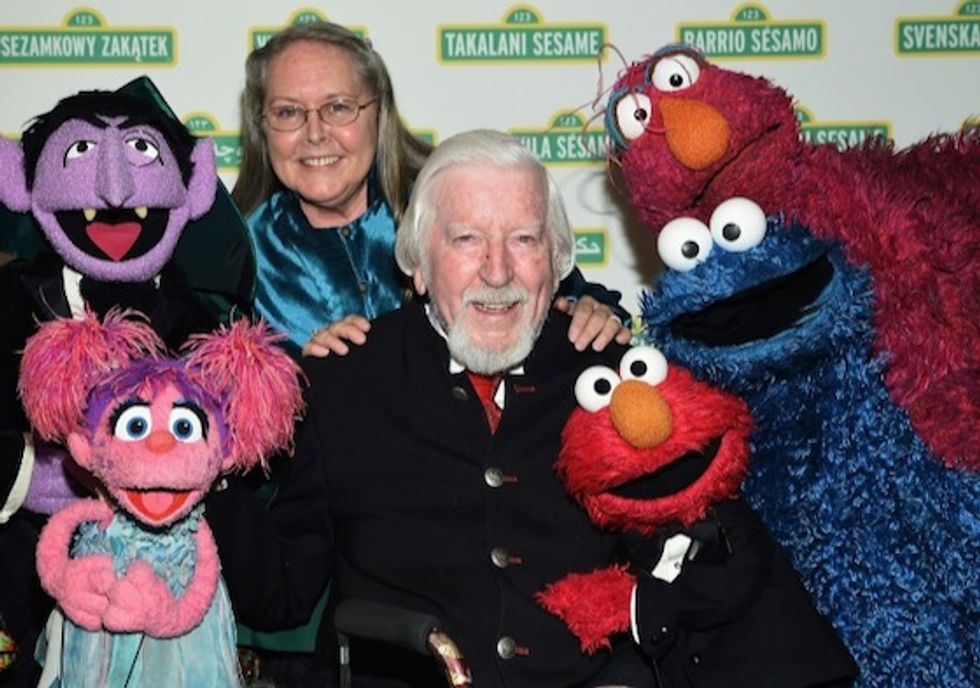 Puppeteer Caroll Spinney, who brought Big Bird and Oscar the Grouch to life on the iconic children's television show "Sesame Street" for half a century, died on Sunday at the age of 85.

Spinney died at home in Connecticut after living for some time with the movement disorder dystonia, which causes uncontrollable muscle contractions, according to a statement from Sesame Workshop, the nonprofit organization that produces the show.

The actor retired from the show last year, having hand-picked successors to play both Big Bird and Oscar -- two very different characters he helped create, delighting millions of children.

Those characters -- one a towering yellow bird, the other a grumpy, green monster in a trash can -- existed in what many considered a magical world created by puppet master Jim Henson and including pals Bert and Ernie, the lovable Cookie Monster and the goofy Kermit the Frog.

Spinney once told The New York Times he had modeled Oscar the Grouch on a cross between a "magnificently rude" restaurant waiter and a ranting New York cab driver.

In 1973, a year after then US president Richard Nixon made his dramatic trip to China, Spinney flew to Beijing for a performance dressed as Big Bird -- he said he only paid half-price for the plane ticket because the character "was only six years old."

When Henson died in 1990, Big Bird sang Kermit's sweetly melancholy tune "It's Not Easy Being Green" at a memorial service.

"Caroll was an artistic genius whose kind and loving view of the world helped shape and define Sesame Street from its earliest days in 1969 through five decades," Sesame Workshop said in a statement.

"His enormous talent and outsized heart were perfectly suited to playing the larger-than-life yellow bird who brought joy to generations of children and countless fans of all ages around the world, and his lovably cantankerous grouch gave us all permission to be cranky once in a while."

Poignantly, Spinney's death came as the show marked its 50th birthday, and as it is lauded with one of America's top cultural awards -- the Kennedy Center Honors -- at a gala Sunday in Washington.

"We are really grateful that we are all here together tonight, because he was an inspiration for us all," Leslie Carrara Rudolph, who portrays Abby Cadabby on the show, told AFP on the red carpet at the Kennedy Center.

AFP/File / STAN HONDA Big Bird (L) is one of the enduring stars of "Sesame Street" along with Oscar the Grouch, Cookie Monster and other lovable furry friends

Spinney himself won multiple Daytime Emmys for his work, as well as a Lifetime Achievement Award. He also earned a Grammy Award, for best children's recording.

At the time of his retirement, he was quoted as saying that his Big Bird alter ego had "opened my mind and nurtured my soul."

He hand-picked his successors in the two major roles -- after mentoring them for more than two decades.

A shy child, Spinney embraced puppetry and reportedly owned 70 puppets by the age of 12. He met Henson at a puppeteers festival in 1962 and bumped into him again in 1969; months later, he joined "Sesame Street."

Spinney's life was the subject of the 2014 documentary "I Am Big Bird: The Caroll Spinney Story."

Spinney, who was 5 feet 10, had to use his hands and wires to manipulate the towering puppet, guided by a TV monitor in the costume.

In 2000, he was named a Living Legend by the US Library of Congress, and he has a star on the Hollywood Walk of Fame.

Henson's family said in a statement that Spinney managed to "perfectly convey the humor and heart in our father's creations. Big Bird was childlike, without being childish. And Oscar the Grouch reflected universal feelings we all share, no matter our age."

"That he could do this work so brilliantly, responsibly and with such infectious love and joy is his gift to us all," the statement said.