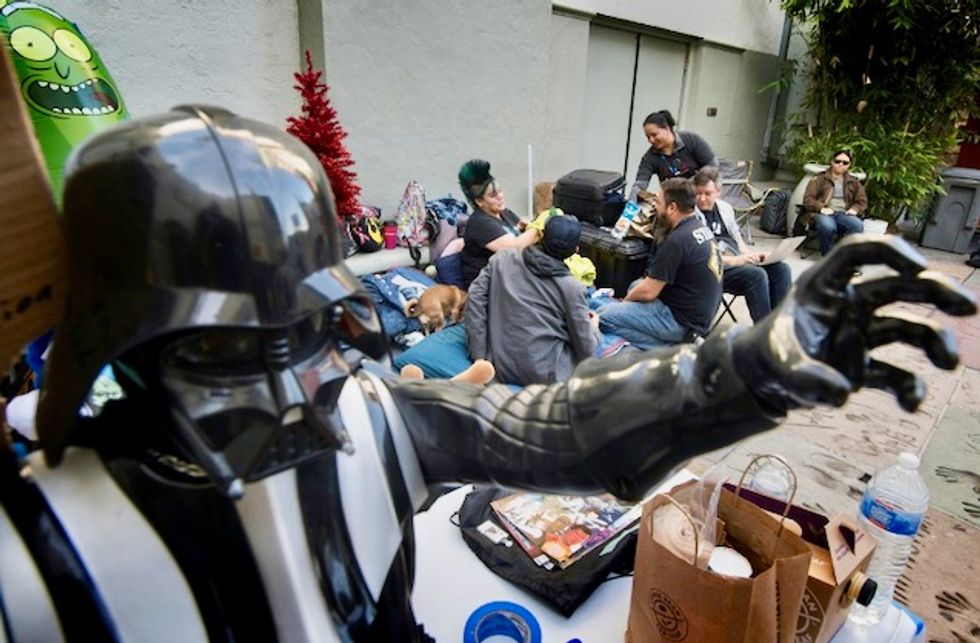 Star Wars fans wait outside the TCL Chinese Theater one week before the release of "Star Wars: The Rise of Skywalker" movie in Hollywood, California on December 12, 2019 AFP / Mark RALSTON

Obsessed Star Wars fans with sleeping bags and a portable movie projector have started camping outside Hollywood's Chinese Theatre, more than a week before the blockbuster begins playing.

Roughly 20 sci-fi lovers were in place Thursday, seven days before doors swing open for the first preview screening of the much-hyped, saga-concluding "The Rise of Skywalker."

Organizers expect that number to swell to 150 in the coming days, with fans of all ages traveling from as far as the United Kingdom and Japan to see the movie first at the iconic venue where the original "Star Wars" premiered in 1977.

"When Star Wars comes, you put everything on hold -- it's like having a baby," said mega-fan Nicolas Johnson, waiting with his dog Cookie.

"I'm actually lucky that I'm able to work on the line," added Shing Hwong, a 39-year-old attorney from near San Francisco who has brought her laptop down with her.

"I'm sleeping here overnight and in the evening I just get to hang out with a lot of my friends, and talk and live Star Wars."

The tight-knit community first began lining up outside Star Wars premieres two decades ago for 1999's "The Phantom Menace."

AFP / Mark RALSTON Star Wars fans wait outside the TCL Chinese Theater one week before the release of "Star Wars: The Rise of Skywalker" movie in Hollywood, California on December 12, 2019

Back then, they waited for 42 days on Hollywood Boulevard. Older and with more commitments now, they decided to trim that down for the latest film -- particularly with this premiere taking place in winter.

"I've got a sleeping bag, at night I have to crawl in there and stay warm," said organizer Erik Murillo, a 47-year-old computer technician from Las Vegas. "I tend to try to stay up at night, awake to watch over everyone else, so I sleep during the daytime."

The group play with board games and LEGO sets, and use their projector to watch the old movies and catch the latest episodes of Star Wars TV series "The Mandalorian."

Murillo admits he is more excited about lining up than the film itself -- he says he has already spoiled its plot by poring over every trailer, interview and fan rumor forum.

"Think of it as a slumber party with friends where everyone has the same interests," said San Diego fashion photographer Justin Nunez, 31, who is on his first Star Wars line.

Nunez has three pairs of long-johns, four sweaters and a sleeping bag for the chilly Los Angeles winter nights.

He is hoping the group will get some relief on Monday when the glitzy, red-carpet world premiere takes place just yards away -- in 2015, Disney invited them in.

"I'm just happy it's not raining," he added.