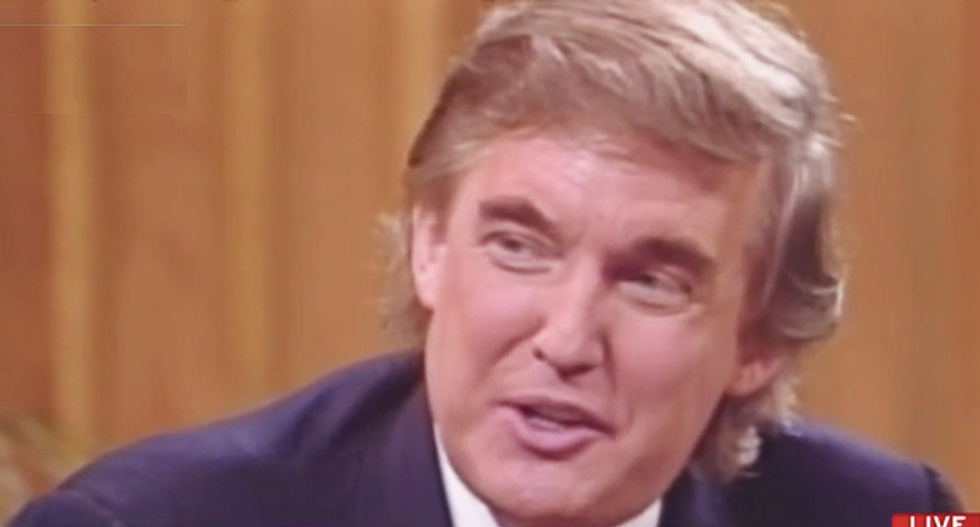 Digging back into the archives, Politico reveals that President Donald Trump appears to be re-purposing the advice he suggested to Bill Clinton when the embattled Democratic president faced impeachment 21 years ago.

According to the report, Trump made an appearance on NBC's Hardball during the Clinton impeachment saga, where he told host Chris Matthews that Clinton needed to "go after his enemies," which has, to date, been Trump's main response to his own impeachment.

Addressing Trump's own impeachment travails, Politico notes how the president has responded to the current Democratic endeavors.

"The subsequent impeachment proceedings? A revenge-motivated 'lynching' that Republicans needed to treat as a war they needed to win. The Democrats investigating him? Trump called them peddlers of ' bullshit,' who would lose in 2020 if they didn’t relent. ('Get a better candidate this time, you'll need it!') And what if Trump does get removed from office? In September, the president tweeted a quote from Pastor Robert Jeffress, warning that if the Democrats removed him as president, 'it will cause a Civil War like fracture in this Nation from which our Country will never heal,'" the report by Politico's Tina Nguyen states.

That falls in line with what Trump told Chris Matthews.

Nguyen adds, "In 1998 and 1999, Trump — then just another billionaire who had yet to launch The Apprentice — used repeated opportunities in the spotlight to share his views on impeachment and what he would do if he were in Clinton’s position. At the time, he was storming the airwaves to promote his book, 'The Art of the Comeback,' while talking up his first dance toward the presidency as a potential candidate for the Reform Party."

Trump's Hardball appearance was not the only time he offered advice to Clinton. Appearing with Matt Lauer on The Today Show in October 1999, Trump addressed Clinton accuser Paul Jones' deposition being used against him by his foes.

“He could have said, ‘Look, I don’t want to discuss it,’” Trump told Lauer. "I’ve seen politicians in New York that are scoundrels get away with that for years. 'I don't talk about my personal life…’ He should have done that. Instead, he had to lie.”