Trump’s Supreme Court nominees lambasted him behind his back — and Kavanaugh thought he was ‘a buffoon’: report 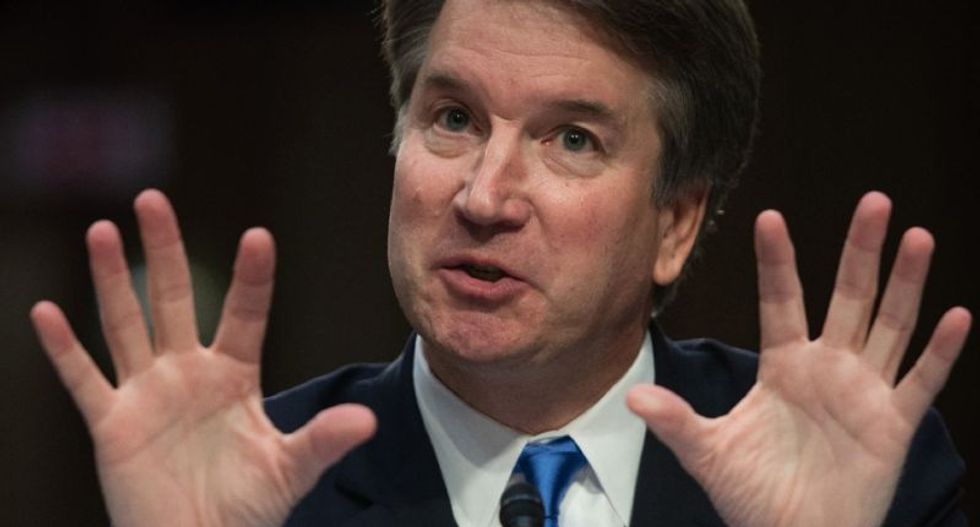 Although President Donald Trump isn’t known for reading any more than he absolutely has to, that doesn’t prevent him from railing against books he considers unfavorable to him — for example, Washington Post journalist Ruth Marcus’ newly released “Supreme Ambition: Brett Kavanaugh and the Conservative Takeover.” Trump, on Twitter, has described Marcus’ book as “fake news” and a “badly written and researched disaster.” And according to The Guardian’s Lloyd Green, Trump might grow to hate the book even more if he actually reads it and sees what the two U.S. Supreme Court justices he has nominated so far — Neil Gorsuch in 2017 and Brett Kavanaugh in 2018 — had to say about him behind closed doors.

Green, in a December 1 article for The Guardian, reports that according to Marcus, Kavanaugh — during the 2016 election — asserted that he “thought Trump was a buffoon.” And Gorsuch once told Sen. Richard Blumenthal of Connecticut that he found Trump’s comments about the U.S. judiciary to be “demoralizing” and “disheartening.”

But whatever Kavanaugh and Gorsuch might have had to say about Trump behind closed doors, one of the things evangelicals loves about the president is the fact that he has moved the U.S. Supreme Court to the right on social issues. Trump, with the help of Senate Majority Leader Mitch McConnell and a GOP-controlled U.S. Senate, replaced the late Justice Antonin Scalia with Gorsuch — which wasn’t, in and of itself, a game changer. But the big change was replacing the retired Justice Anthony Kennedy with Kavanaugh: while Kennedy was a right-wing libertarian who often sided with Justice Ruth Bader Ginsburg on social issues like gay rights, same-sex marriage and abortion, Kavanaugh is more of a social conservative in the Scalia/Justice Clarence Thomas vein.

Green says of Marcus’ book, “Marcus, a veteran Post reporter (and) now deputy editorial page editor, delivers a highly readable 496-page account of Kavanaugh’s nomination, the surrounding machinations within the White House and Congress, and the decades-long campaign waged by the right to wrest control of the judiciary. Although she is unsympathetic to the GOP’s endeavor, her book is amply sourced and footnoted. It is meticulous in detail and credible in content.”

If the U.S. Supreme Court overturns Roe v. Wade at some point — which is a strong possibility — and legal access to abortion is again determined on a state-by-state basis, it will be a huge victory for the Christian right and Trump’s white evangelical base. But Green notes that pushing the Supreme Court to the right has not only culture war implications, but also, economic implications: Republicans — Marcus demonstrates in her book — are hoping to eradicate what remains of President Franklin Delano Roosevelt’s New Deal.

“In other words,” Green writes, “fetuses weren’t the only reasons that large checks were being cut to the Federalist Society, or that constitutional originalism had become the civic religion of the right. FDR’s legacy had to be gutted. Social Security may no longer be so secure.”

Even if Trump is voted out of office in 2020 and Democrats retake the Senate, liberals and progressives will still have a lot to complain about in the years to come thanks to Trump’s potentially long-lasting influence on the judiciary. Let’s say that 2020 is a best-case scenario that progressives would love: Sen. Bernie Sanders becomes president, Democrats retake the Senate and expand their House majority — even then, Trump’s effect on the judiciary could be felt for years to come.

“The appointments of Gorsuch and Kavanaugh were not isolated events,” Green explains. “Rather, they marked a culmination of a concerted effort by movement conservatives to remake the courts in their image. While abortion was very much part of their agenda, so was stymying the administrative state and rolling back the New Deal.”