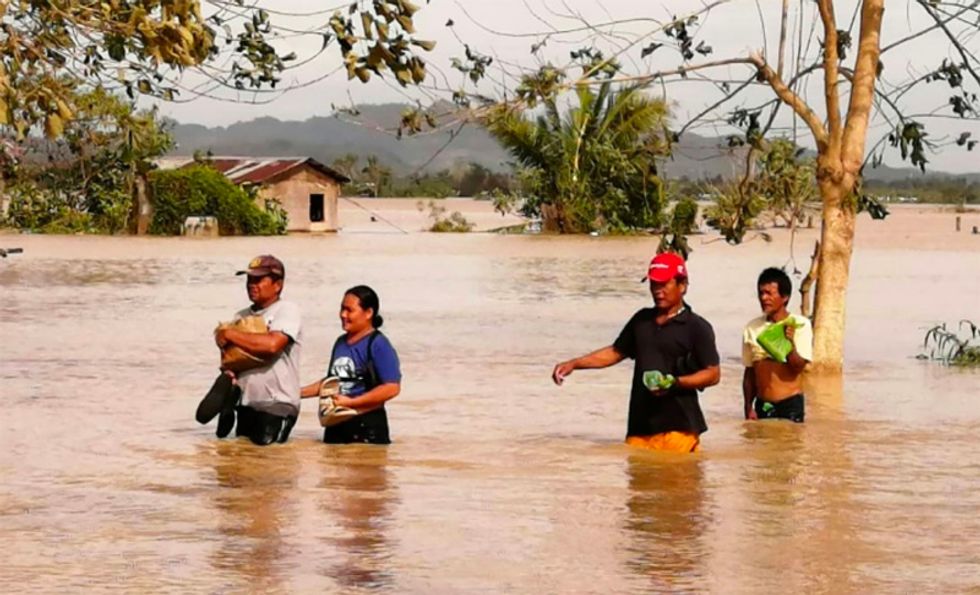 Typhoon Phanfone pummelled the central Philippines on Christmas Day, bringing a wet, miserable and terrifying holiday to millions in the mainly Catholic nation.

Police said six people were missing as the typhoon leapt from one small island to another for the second day -- crumpling houses, toppling trees and blacking out cities and towns, including in popular resorts like Boracay.

At the height of the festive season on Wednesday, tens of thousands were stranded at shuttered ports or evacuation centres while the rest of the region's population cowered in rain-soaked homes.

Though weaker, Phanfone was tracking a similar path to Super Typhoon Haiyan, the country's deadliest cyclone on record which left more than 7,300 people dead or missing in 2013.

A father, his three children and two other relatives were missing after their hut was swept away early Wednesday when heavy rain caused a creek to overflow near the town of Balasan, provincial police told AFP.

More than 16,000 people spent the night in improvised shelters in schools, gyms and government buildings as the typhoon first made landfall Tuesday, civil defence officials said.

"It was frightening. The glass windows shattered and we took cover by the stairs," Ailyn Metran told AFP after she and her four-year-old child took refuge at the state weather service office in Tacloban city, where her husband worked.

The typhoon ripped a metal window frame off the building and dropped it onto a car parked outside, she said.

With just two hours' sleep, the family were relieved to find their two dogs safe back home Wednesday, though the floor was covered in mud and a felled tree rested atop a nearby house.

Other survivors posted pictures and videos on social media of crushed homes, buses half-submerged by brown floodwater, roads strewn with tree trunks, and coconut and banana plants being shredded by ferocious winds.

With sustained gusts of 195 kilometres (121 miles) an hour -- which can knock down small trees and destroy flimsy houses -- the typhoon was on track to hit the island resort of Coron overnight, the weather service said.

Coron's beaches emptied and boat tours were suspended on Christmas Day as Western tourists stayed indoors ahead of the onslaught.

"Many of the tourist establishments here are closed, and some of our guests failed to arrive because their flights were cancelled," hotel receptionist Nina Edano told AFP by phone.

"We're not scared, but the ambience here is generally gloomy," she added.

The typhoon hit land as millions of Filipinos trooped to once-yearly clan reunions centred on the "noche buena", a sumptuous midnight meal that is the highlight of the Catholic nation's holidays.

More than 25,000 people remained stranded at ports on Christmas Day with ferry services still shut down, the coast guard said.

Scores of flights to the region also remained cancelled, though the populous capital Manila has so far been spared.

On the north of the island of Cebu, residents decamping from evacuation centres were greeted by the sorry sight of their damaged homes on Christmas Day, civil defence official Allen Froilan Cabaron told AFP.

"They were safer at the evacuation centres. At least they were able to eat the Christmas Eve meal there, even if only tinned fish and instant noodles were available," Cabaron said.

"But... the atmosphere would have been different because they were not at home," Cabaron added.

The Philippines is the first major landmass facing the Pacific cyclone belt. It is hit by about 20 storms and typhoons each year that kill scores of people and wipe out harvests, homes and infrastructure, keeping millions perennially poor.

A recent study by the Manila-based Asian Development Bank said the most frequent storms lop one percent off the Philippines' economic output, with the stronger ones cutting GDP by nearly three percent.