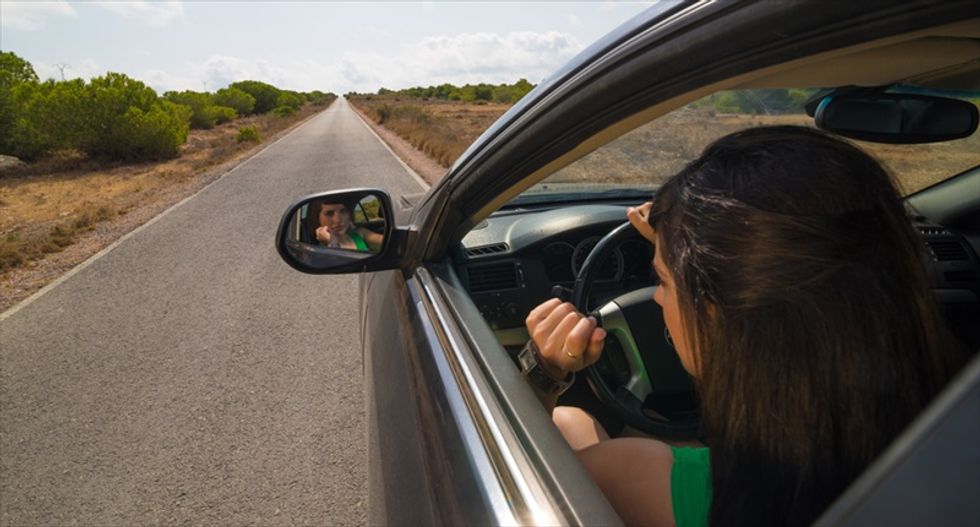 'Female Driver With A Long Road Ahead Of Her' [Shutterstock]

Driving a car in the United States -- a country similar in size to Europe -- is often a necessity, as well as being a key part of national culture for over a century.

But for many of the more than 10 million undocumented immigrants living in America, the sense of freedom from getting behind the wheel is only now becoming an attainable dream.

Luis Jimenez, from Mexico, has been driving in upstate New York near the border with Canada for 13 years, but illegally because he doesn't have a license.

"The dream of all of us is to drive without fear of being stopped by the police, without fear of calling the immigration police and deporting us," says the 34-year-old undocumented migrant.

That wish is about to come true for Jimenez, who works 12 hours a day, six days a week raising calves on a farm in Livingstone county, 300 miles (480 kilometers) north of New York City.

Jimenez applied for a driving license in December after a new law permitting undocumented migrants to drive came into force.

"It's a relief! The isolation is over," said Jimenez, president of the Agricultural Alliance, a group of rural immigrant workers who have fought for years for the right to drive.

Washington state in the north-west was the first to grant driver's licenses to undocumented immigrants in 1993. It was slowly followed by other states, most of which were under Democratic Party control.

On Thursday, New Jersey governor Phil Murphy signed a law which made his state became the 14th to authorize the measure, following closely in the footsteps of New York.

A similar law is due to take effect in Oregon in 2021 while moves are also afoot in at least six other states.

They all require migrants to pass a driving test and are a lifeline in towns and rural areas where public transport is virtually nonexistent.

Activists argue that states should quickly adopt the law because thousands of immigrants already drive without permission, risking fines and deportation.

They say it would increase road safety and allow undocumented migrants to obtain car insurance while deliver an economic boost to towns that grant permits.

However, many Republicans in the Donald Trump era are furious as his administration moves to crack down on immigrants.

Interim US Customs and Border Protection (CBP) chief Mark Morgan is upset that New York's "green light bill," as it has been dubbed, blocks driver licensing officials from sharing data with immigration officials.

"The information we receive from NY state is vital to our missions and blocking federal law enforcement officers from accessing it creates a significant threat to both officer and public safety," he tweeted after the law entered force in New York last Saturday.

Supporters, though, point out the a driving license for undocumented people is more limited in scope than ones for legal residents and citizens.

It cannot be used to vote or as a form of identification when boarding domestic flights, for example.

"I oppose this legislation because it confers privileges on those who have knowingly violated our laws," said New Jersey state representative Erik Peterson (R) who voted against it.

In New York state, some Republican county clerks in charge of vehicle licensing lost a challenge to the law in court.

This past week, hundreds of undocumented migrants have been lining up in New York to apply for their first licenses.

"Here a car is a tool, it is not a luxury," Noe, a construction worker who refused to give his surname out of fear of the police, told AFP while waiting his turn at a center in Brooklyn.

"Now I can go freely, to look for children at school, to run errands," he added.

The 40-year-old Honduran said he has been driving without a license and has received several fines of $400 each.

Another in line, 35-year-old Mexican Jose Hernández, wants to leave his job delivering food on a bicycle and "get a better job" as a taxi or Uber driver.

Back upstate, six hours north of Manhattan, Jimenez dreams about taking a vacation for the first time in 15 years.

"I've always wanted to take my children to the beach, to travel free from fear," he said.