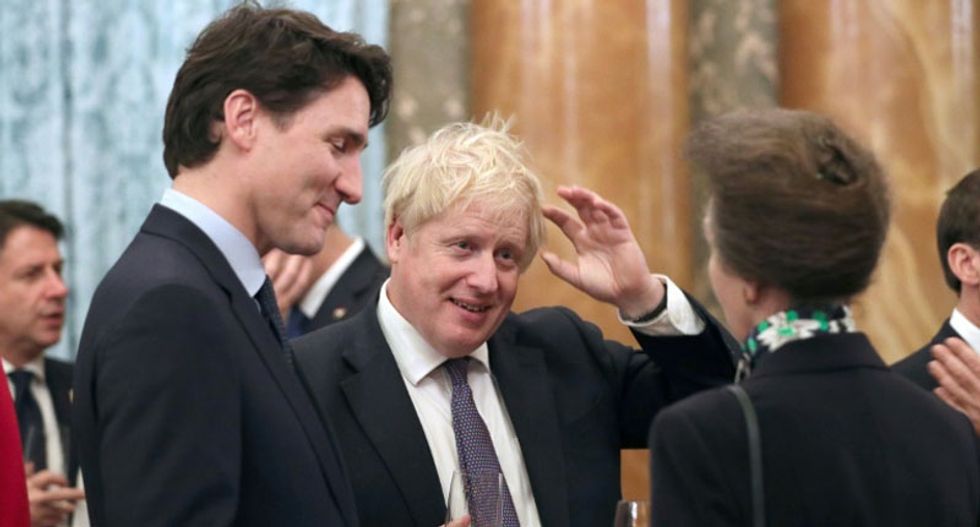 Johnson's ruling Conservatives won their best result for three decades on Thursday night after promising to get Britain out of the European Union on January 31, a new deadline set by Brussels.

The snap general election turned into a re-run of the original 2016 EU membership referendum, whose outcome paralysed Britain's leaders and created divisions across society.

But in a victory speech in Downing Street on Friday, the former London mayor struck a magnanimous tone, vowing to listen to those who opposed Brexit and lead an inclusive government.

"I urge everyone to find closure and to let the healing begin," he said hours after visiting Queen Elizabeth II to be reappointed prime minister.

Johnson staked his political career on the election, which created the possibility of the pro-EU opposition coming to power and calling a new Brexit referendum that could undo the results of the first.

The gambit payed off spectacularly, with his Tories securing 365 seats in the 650-seat House of Commons -- their biggest majority since the 1980s heyday of Margaret Thatcher.

It also devastated the main opposition Labour party, which suffered its worst result since 1935.

Labour's socialist leader Jeremy Corbyn said he would step down after a period of "reflection" within the century-old party.

The anti-Brexit Liberal Democrats also had a dismal night, falling to just 11 seats and losing their leader, Jo Swinson.

London stocks and the British pound jumped on hopes of an end to years of uncertainty, which has hurt investment and economic growth.

Johnson said his party had an "overwhelming mandate from this election to get Brexit done".

He promised to then focus on other public priorities, notably by increasing investment in healthcare, schools and infrastructure.

"The work is now stepped up to make 2020 a year of prosperity and growth and hope," he concluded, to cheers from aides and activists outside Number 10.

Anti-Brexit campaign groups expressed dismay at the result, which spells the end of attempts to keep Britain in the European Union, although many voters welcomed a decisive result.

"At least it's clear," said lawyer Gordon Hockey in London. "It's not necessarily what I wanted but at least we know where we stand and Brexit will happen in some form or other."

Parliament will reconvene on Tuesday and Johnson is expected to publish legislation before Christmas needed to ratify the Brexit deal he agreed with Brussels in October.

This should be passed by January but Britain and the EU still need to thrash out a new trade and security agreement -- a process that officials have warned could take years.

At an EU summit in Brussels on Friday, the bloc's leaders expressed relief at the clear result and said they would work for a swift trade deal.

But they warned that any new arrangement must uphold European values and norms.

German Chancellor Angela Merkel said Britain would be an economic "competitor at our door" after Brexit.

The result of Britain's third election in almost five years signals a personal victory for Johnson, who remains a polarising figure.

US President Donald Trump tweeted his congratulations on a "great WIN!" and said London and Washington would be able to strike a "massive new trade deal".

He also told reporters on Friday that Johnson's victory bodes well for his own fortunes in next year's US election.

"I want to congratulate Boris Johnson on a terrific victory. I think that might be a harbinger of what's to come in our country. It was last time," Trump said.

Johnson has promised new free-trade deals with the EU and the United States, and after Thursday's victory, now has the political capital at home to press ahead.

The US State Department said Friday it was "committed" to reaching a comprehensive trade deal with its historic ally "once it formally withdraws from the European Union".

Labour's support collapsed on Thursday, with the Tories taking many former strongholds in northern England and Wales that voted to leave the EU.

The party lost 59 seats to end up with 203, after what Corbyn admitted had been a "very disappointing night".

Corbyn had promised a second referendum on Brexit in a bid to appeal to half of British voters who still want to stay in the EU.

But he had focused Labour's campaign on a radical programme of economic change, including re-nationalising some key industries, which failed to woo traditional voters.

Speaking early Friday, Corbyn defended his "manifesto of hope" and maintained his policies were "extremely popular" during the campaign.

But Corbyn has been dogged by accusations of sympathising with proscribed terror groups and failing to tackle anti-Semitism within the Labour party.

After Labour's fourth successive electoral defeat -- and the second under Corbyn -- the party's ruling executive body will meet in January to consider the next steps.

Dozens of protesters marched through London on Friday evening and two arrests were made in relation to scuffles during the demonstration, police said.

After winning 48 of 59 seats in Scotland, SNP leader Nicola Sturgeon stepped up the pressure for a new referendum on independence.

"The stunning election win from last night for the SNP renews, reinforces and strengthens the mandate we have from previous elections to offer the people of Scotland a choice over their future," she said.

The first Scotland independence referendum failed in 2014, when 55 percent voted in favour of preserving its membership in the United Kingdom.

Sturgeon said Thursday's outcome gave Johnson a mandate to take England out of the European Union, but not Scotland.