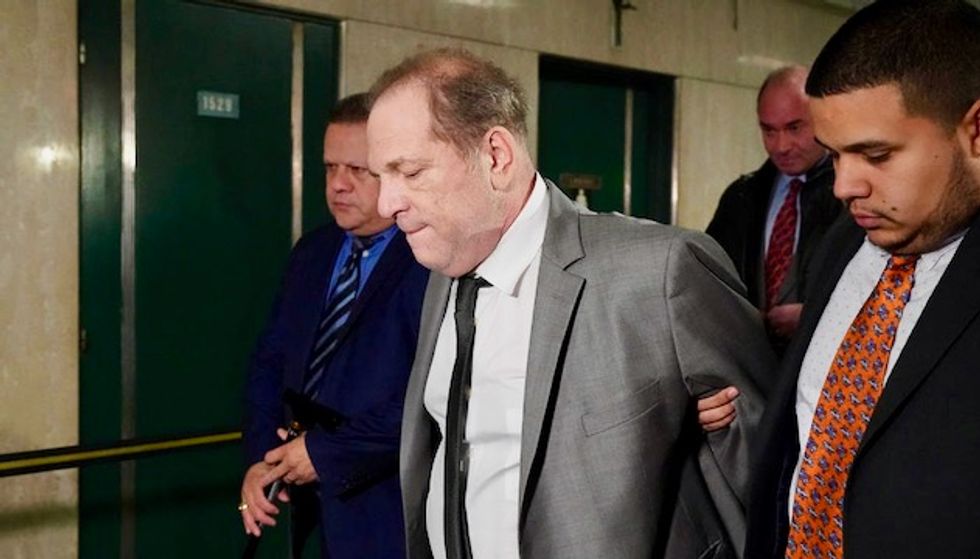 New York prosecutors on Friday called for Harvey Weinstein's bail to be increased to $5 million, arguing that the disgraced Hollywood mogul -- accused of sex crimes -- had violated the conditions of his release and could try to flee the country.

The once-powerful film producer, whose case sparked the #MeToo movement against sexual harassment, appeared in a Manhattan court for a hearing on his bail conditions, as his trial looms on January 6.

As well as the $1 million bail already set, the 67-year-old, who faces charges of rape and forcibly performing oral sex on a woman, has had his passport confiscated and wears an electronic tracking bracelet.

Weinstein, looking frail as he was helped by lawyers into the courtroom, is allowed to travel around the United States as long as he informs the authorities any time he leaves New York state, where he lives.

But prosecutor Joan Illuzzi-Orbon however said that on numerous occasions, the producer of "Pulp Fiction" and "Shakespeare in Love" had been untraceable -- in violation of the terms of his release.

On two occasions in September and October, the radio silence had lasted for several hours, prompting the district attorney's office to send an investigator to his home north of New York City.

Since he always travels outside New York by private jet and has access to "almost unlimited resources," Illuzzi-Orbon argued that "this man could fly out in a private jet and go to another country, like that."

"We just want to make sure he is here for the trial," she said, requesting the bail increase.

Donna Rotunno, one of Weinstein's lawyers, blamed the gaps in transmission on a lack of cell phone towers in rural Bedford, where her client lives.

"These are nothing more than technical glitches," she said. "He employs someone to make sure this is handled."

"There was never an attempt to remove the bracelet," she said, adding that her client "is anxious to comply with court orders... he is anxious to go to trial."

Judge James Burke made no decision on Friday but said the court would reconvene on Wednesday.