What constitutes fair and unfair criticism of Israel? 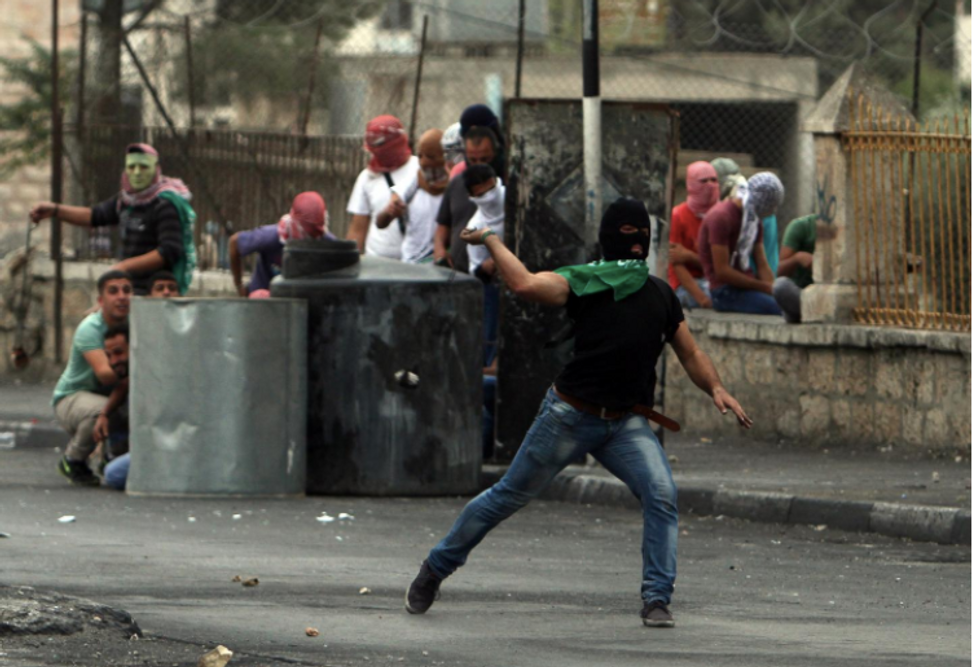 A Palestinian protester throws a stone using a slingshot toward Israeli security guards during clashes at the main entrance of the West Bank town of Bethlehem on October 23, 2015.

Canada recently voted at the United Nations for the establishment of a Palestinian state. At the same time, Canada reiterated its position that there were too many UN resolutions about Israel. Canada argued that these resolutions unfairly singled out Israel for criticism.

The International Holocaust Remembrance Alliance defines anti-Semitism as “a certain perception of Jews, which may be expressed as hatred toward Jews.” It states that evidence of anti-Semitism “might include the targeting of the state of Israel, conceived as a Jewish collectivity.”This event raises questions of what are legitimate or illegitimate criticisms of the state of Israel. It also raises questions about when or whether such criticism is anti-Semitic.

However, it also states that “criticism of Israel similar to that leveled against any other country cannot be regarded as anti-Semitic.”

Using this definition, Canada’s vote for creation of a Palestinian state does not delegitimize Israel, any more than Canadian criticism of any other state delegitimizes it.

On the other hand, activists for Palestinian rights who call for the state of Israel to be destroyed, for example, by referring to a free Palestine “from the river to the sea,” engage in illegitimate criticism.

To suggest that Jews have no right to live in Israel is also to engage in illegitimate criticism. All states are permitted to determine who will live within their borders. And suggesting that Jews should not live in Israel means advocating the creation of a huge refugee population based on religio-ethnic criteria.

Some critics call Israel a colonial power. They assume that it is illegitimate for any Jewish “settler” to live in Israel proper. This assumption is based in part on the belief that Jews are not indigenous to the Middle East. But Jews have lived in the Middle East for thousands of years.

In later years, about 800,000 Jews left Arab countries. About two-thirds of them settled in Israel, and the other third elsewhere. Many of these Jews had been forcibly expelled.

Many Jews settled in Israel from Europe. It is important to remember the context of European pogroms and Nazi genocide that obliged many of them to flee.

This does not justify Israeli violations of the human rights of either Israeli Arabs or of Palestinians in the West Bank and Gaza. It merely provides some context as to why so many Jews have settled in Israel.

Sanctions against Israel are legitimate

Having said this, I agree with the opinion of the International Holocaust Remembrance Alliance that it’s legitimate to criticize Israel as one might criticize any other state. Thus the boycott, divestment and sanctions movement against Israel is legitimate, as long as it does not simultaneously question the right of Israel to exist as a state. Many Jewish people both within and outside Israel who are concerned about Palestinian rights support this movement.

A better way to judge Israel’s actions in Gaza and the West Bank is through universal standards. One such standard is international humanitarian law, especially the fourth Geneva Convention of 1949. This convention prohibits transfers of population, either from or into conquered territories. That means Jewish settlements in the West Bank are illegal.

The International Court of Justice also adheres to universal standards. It ruled in 2004 that the wall separating Israel from the West Bank is illegal, because part of it is built outside Israel’s territory. This wall frequently separates Palestinians from their land, work opportunities and family members.

Other states also undermine Palestinians’ human rights. Like Israel, Egypt periodically blockades Gaza . These blockades deny Palestinians freedom of movement across national boundaries. Both these states have the legal right to control their own borders. But these controls frequently mean that Palestinians cannot buy food, go to hospitals or work in Israel or Egypt.

Arab states also undermine Palestinians’ human rights. Some have given shelter to Palestinian refugees and their descendants for decades, but refuse to grant them citizenship.

Serious concern for the human rights of Palestinians requires consideration of all the states that violate their rights under international human rights and humanitarian law.

These legal standards are universal. As long as they do not advocate eradication of the state of Israel and/or expulsion of Israeli Jews, states and activists that adhere to these standards are engaged in legitimate criticism.

Activists should respect Israel’s rights as a sovereign state. But Israel should respect Palestinians’ rights under universal human rights and humanitarian law. Israel is the most important of all the states in the Palestinian crisis.

Unfortunately, the government of Israel in 2019 was nationalist and expansionist. There’s little hope as we head into 2020 that Israel will negotiate in good faith with Palestinian leaders. Yet Israel will never be safe from attack until it negotiates a peaceful settlement that gives Palestinians their own state.

[ You’re smart and curious about the world. So are The Conversation’s authors and editors. You can read us daily by subscribing to our newsletter.]