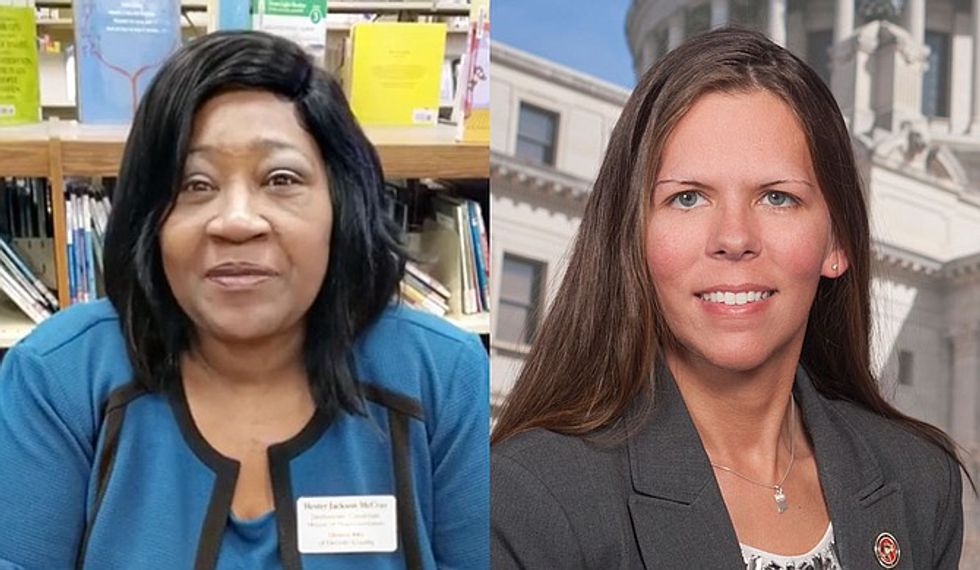 GOP legislator Ashley Henley, who lost by 14 votes, asked the Republican-controlled statehouse to overturn the results based on her claims of election irregularities, and that's not the first time in U.S. history that whites have sought to punish black politicians for winning, reported The Guardian.

“Elections are elections. It’s not a guaranteed position,” Jackson-McCray said. “She has the right to go through the technicalities, but I think if people read this notice she’s putting out, it looks like she’s arguing that her own party didn’t manage the election right. The election was run by Republicans.”

A black community activist from Canton, Mississippi, was arrested and convicted of voter fraud in September, more than a year before she had been elected to the school board.

Prosecutors accused Courtney Rainey of trying to win votes in a previous election through bribes, and she acquitted but later charged with witness intimidation -- and sentenced to 15 years in prison on that conviction.

Several black residents, including three elected officials, were indicted on various election-related crimes at the same time in Canton.

Georgia has also prosecuted black elected officials in recent years, such as Douglas city commissioner Olivia Pearson and a dozen others -- including three members of an all-black school board -- in Quitman County.

The removal of winning black candidates corrodes the entire election process by removing those officials, and also by sowing mistrust and doubt among black voters -- who then become less likely to take part in the process.

Those tactics, not surprisingly, originated during the Reconstruction era.

The Georgia legislature removed 28 newly elected black lawmakers by claiming the new state constitution did not allow them to serve, and an incumbent black legislator in Selma, Alabama, was escorted by an armed deputy from a campaign speech -- and then forced at gunpoint to promise to stop holding political meetings.

That legislator, Jeremiah Haralson, filed an official complaint with Congress after losing his re-election bid, but he never received a response.