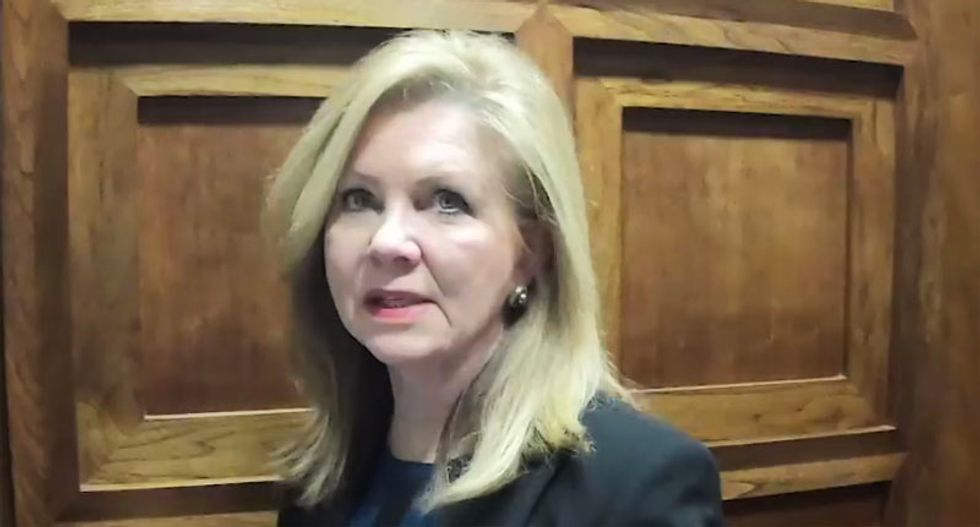 When asked by reporters this week whether they need to call witnesses in President Donald Trump's impeachment trial, Sen. Marsha Blackburn (R-TN) said that there was no need.

CNN noted that it was an odd statement coming from Blackburn because she complained about the Democrats' "second-hand witnesses." Yet, when given the opportunity to hear a first-hand witness could corroborate the story, Blackburn still shot it down.

"I don't think there was any stunning revelations yesterday, other than the fact that everyone in front of them had second, third or fourth-hand knowledge," Blackburn said on Fox News last November. "They did not have direct knowledge."

"So, that was, you know, before John Bolton," said CNN host Erin Burnett. "So, then John Bolton comes out first-hand account. You would expect Sen. Blackburn to be the first one, 'let's hear from him!'"

"We don't need witnesses," she sarcastically said in a sing-songy way as she walked down the hallway.

Burnett told guest David Axelrod to "square that circle." The panel laughed before Burnett admitted it was an "impossible task."

As he pointed out, even Trump's own attorneys made the case that Bolton should be called, saying as part of his presentation Tuesday that all of the information was second-hand.

Blackburn has had a rough go of things during the Senate impeachment. She tried to pretend she was a working mother, when her children were over 40, married and had kids of their own, and she was blasted for going after questioning the patriotism of an American soldier.

See Blackburn's big flub and the comments about it below: