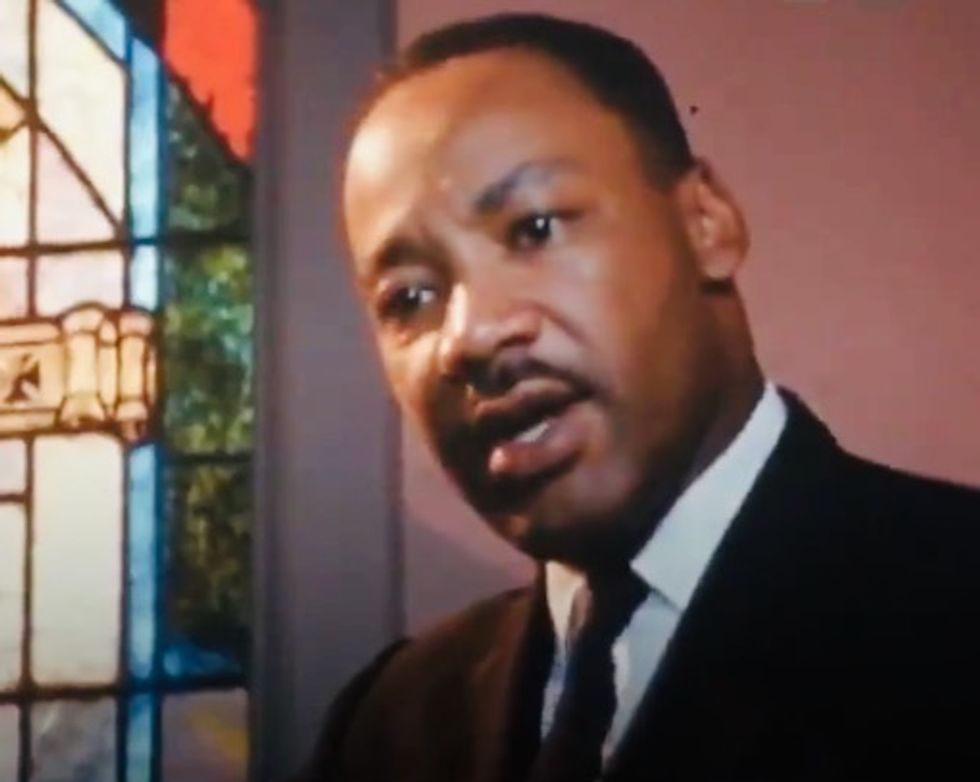 While the likes of President Donald Trump, right-wing Republicans, and Pentagon officials—in addition to many liberals—marked Martin Luther King Jr. Day with selective quotes and messages, progressives aimed to challenge their whitewashed narrative of the civil rights leader's legacy with detailed reminders of King's scathing critique of not only racism but also capitalism, militarism, and imperialism.

"Let us do more than honor and remember Dr. King. Let us be faithful to his revolutionary spirit and his call for a 'radical revolution of values.'"

Among those who spoke out leading up to the Monday holiday was Rev. Dr. William J. Barber II, who said over the weekend that "in this historical moment, we especially need to remember the real Martin Luther King, because there are a lot of false portraits that are being pandered in the public square."

The real King, Barber explained, "found himself having to take on a society he loved so much he had to criticize it—a society he properly diagnosed as having a neurotic sickness and a septic commitment to racism, poverty, and militarism that was destroying its soul and ripping apart its moral promises and possibilities."

As King told the Southern Christian Leadership Conference (SCLC) board on March 30, 1967, "The evils of capitalism are as real as the evils of militarism and evils of racism."

Just a few days later, on April 4, 1967—exactly one year before King was assassinated—he delivered an infamous speech at Riverside Church in New York City condemning the Vietnam War. He called for an end to the "nightmarish conflict" as well as for the nation to "undergo a radical revolution of values," saying in part:

A true revolution of values will lay hand on the world order and say of war, "This way of settling differences is not just." This business of burning human beings with napalm, of filling our nation's homes with orphans and widows, of injecting poisonous drugs of hate into the veins of peoples normally humane, of sending men home from dark and bloody battlefields physically handicapped and psychologically deranged, cannot be reconciled with wisdom, justice, and love.

Journalist Glenn Greenwald pointed to "that extraordinary speech" and "how completely [King's] vehement anti-war advocacy is ignored when commemorating his life (just as his economic views are)" in a 2013 column for The Guardian that he shared on Twitter Monday. In his column, Greenwald wrote:

What I always found most impressive, most powerful, about King's April 4 speech is the connection he repeatedly made between American violence in the world and its national character. Endless war wasn't just destructive in its own right, but is something that ensures that America's "soul becomes totally poisoned," fosters "spiritual death," perpetuates the "malady within the American spirit," and elevates "the Western arrogance of feeling that it has everything to teach others and nothing to learn from them." In sum, to pursue endless war is "to worship the god of hate" and "bow before the altar of retaliation."

This is the overarching point that drives our current debates about war and militarism through today. The debasement of the national psyche, the callousness toward continuous killing, the belief that the U.S. has not only the right but the duty to bring violence anywhere in the world that it wants: that is what lies at the heart of America's ongoing embrace of endless war. A rotted national soul does indeed enable leaders to wage endless war, but endless war also rots the national soul, exactly as King warned. At times this seems to be an inescapable, self-perpetuating cycle of degradation.

"On MLK Day, worth remembering his stirring, passionate condemnation of U.S. militarism," Greenwald tweeted Monday, "and his arguments about why opposition to it can't be extricated from anti-racism or anti-poverty activism."

Sen. Bernie Sanders (I-Vt.), a leading candidate in the Democratic presidential primary race, referenced King's Riverside speech in a tweet Monday. Sanders declared: "Let us do more than honor and remember Dr. King. Let us be faithful to his revolutionary spirit and his call for a 'radical revolution of values.'"

Sanders, one of several White House hopefuls who spoke at "King Day at the Dome" in South Carolina, added that "we must fight to carry out his radical and bold vision for racial and economic justice in America and transform our national priorities."

To truly honor Dr. King we must fight to carry out his radical and bold vision for racial and economic justice in A… https://t.co/P7Dxc1uuwD
— Bernie Sanders (@Bernie Sanders)1579530204.0

“We are saying that something is wrong… with capitalism… There must be better distribution of wealth and maybe Amer… https://t.co/GvSi9kHj1x
— Mehdi Hasan (@Mehdi Hasan)1579539879.0

Rep. Ilhan Omar (D-Minn.) also took to Twitter Monday to call for honoring King by acknowledging his actual record, noting that he "saw racial injustice, economic injustice, and war as three of the world's great evils."

Omar shared a 2018 "must-read" editorial from The Charlotte Observer, republished last week, which explained that King "was not the cuddly creature we re-invent every King Day to lie to ourselves and our kids about how he only wanted us to get along."

King "was a radical progressive," the group Public Citizen tweeted Monday. "Do not allow America to whitewash his legacy."

As Candice Benbow wrote for Essence in 2018:

He was suspected to be communist, considered a race baiter, and was deemed the most dangerous man in America by the FBI. But the past few decades have canonized him into sainthood and it is virtually impossible to travel in many communities without seeing a street named in his honor.

The universal adoration of Dr. King can only be described as a willful decision to mischaracterize his person and work. Detaching Dr. King from his radical, socialist, left-leaning politics is the only way many Americans who now praise him can do so with (what they think is) a clear conscience.

Decrying the soundbites and revised histories that circulate on this day each year, Benbow added that "whitewashing Dr. King's radical legacy to make him more palpable to the masses works to alleviate America's conscience and sell the lie that we are post-racial. But we know the truth."