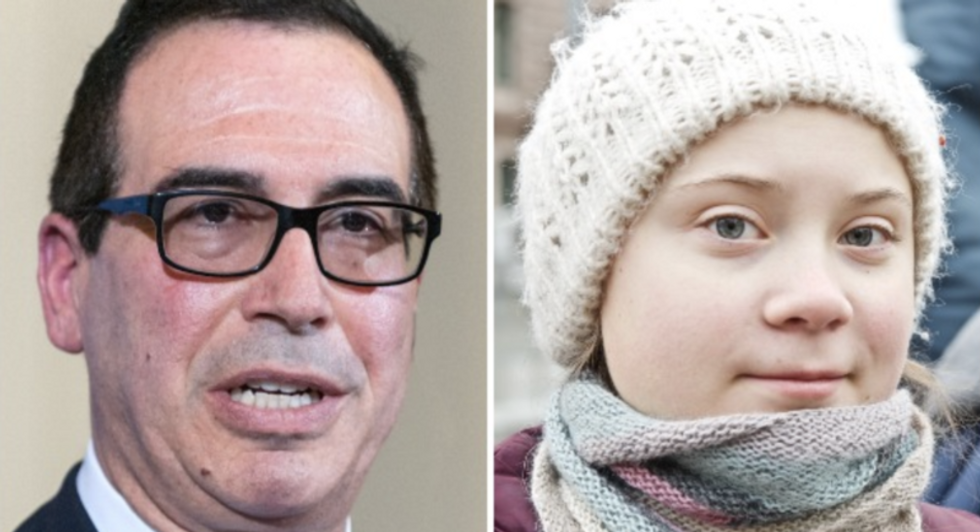 Treasury Secretary Steven Mnuchin made headlines this Thursday after he took a dig at teen climate activist Greta Thunberg, saying that she should study economics in college before she comments about investors and fossil fuel stocks. Taking Mnuchin's comments, the Washington Post's Philip Bump asked an actual economist for his thoughts, and according to Gernot Wagner, Thunberg is basically citing Economics 101.

“It’s precisely this scenario of having fossil fuels go the way of tobacco that makes fossil fuel execs the most nervous,” Wagner said.

“It’s Economics 101 that tells us that when there is a difference between private costs and costs to society, that difference ought to be included in one’s decision-making,” Wagner continued. “And when I say ought, of course the private individual won’t; it’s up to somebody in a position of power — let’s say the secretary of Treasury — to want to guide economic policy in the right direction.”

Wagner then cited a book published 1920 -- long before the economics of climate change was an issue -- by Arthur Pigou called “The Economics of Welfare.”

“Pigou wasn't worried about climate change. His example was rabbits overrunning a communal meadow,” Wagner said. “If you are a British aristocrat trying to shoot rabbits in your spare time and you put your own rabbits on the communal meadow — well, you get the benefits but everyone else has the costs because your rabbit is eating everybody else's food, too."

“Every undergrad learns that first semester, introductory microeconomics,” he added.