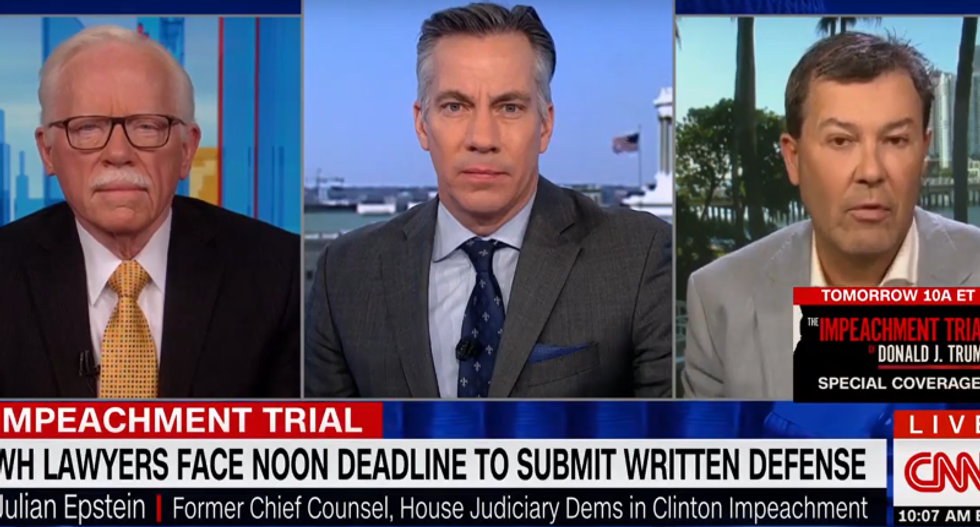 On CNN Monday, two veterans of the impeachment proceedings against President Bill Clinton clashed over whether President Donald Trump was guilty of impeachable offenses.

"My view is that the phrase that the president's lawyers included in their six-page answer over the weekend is absolutely ironclad, perfectly correct," said Bob Barr, a former House impeachment manager against Clinton. "The language in the Constitution says very clearly that the only basis on which a president can be impeached and removed from office is treason, bribery or other high crimes and misdemeanors. You have to have a crime. And no matter how much rhetoric you put around that to try and get around it, that is a fact, a legal fact, you have to have a crime."

"First off, impeachment is not judicially reviewable," shot back former Democratic House counsel Julian Epstein. "Secondly, without turning this program into a constitutional law seminar, the overwhelming weight of constitutional opinion here is that you don't need a specific crime. When the impeachment clause was adopted, there weren't federal crimes that existed at that time, or very few ... I think bob's view, with all due respect to him, would be an extreme minority view, certainly amongst constitutional experts."

"If it were me ... I would have included bribery in the actual articles, the House managers chose not to," added Epstein. "But you don't have to have that in order for it to be impeachable, and it's certainly not judicially reviewable."

"If, in fact, the House managers and the House Democrats at large believed that the president did obstruct justice, and/or committed bribery, then they should have included those offenses in the articles," replied Barr. "They didn't, and they are therefore defective on their face."

"No, only to the extent that one can argue whether or not a specific crime that is alleged rises to the level of a high crime or misdemeanor," said Barr. "Simply because the president violates a law does not mean he should be impeached. The argument, though, is not whether or not a crime has to be alleged, that is to me clear on its face, the only question is whether or not a particular crime rises to an impeachable level."

"I just think it is extraordinary," said Epstein. "I know bob, I like him, I think he's a very honorable guy, but for the Republican managers in the 1999 impeachment to argue that a perjurious statement in a civil case on a nonmaterial fact was impeachable in the case of Clinton, and in the case of Trump, where you have the president using his official office, using security aid to a foreign country, withholding that in order to induce them to interfere into our election, that is not an impeachable offense? That just seems to me that the founding fathers would be turning over in their graves if they heard that kind of upside down, you know, black is white kind of argument. That is absurd on its face."