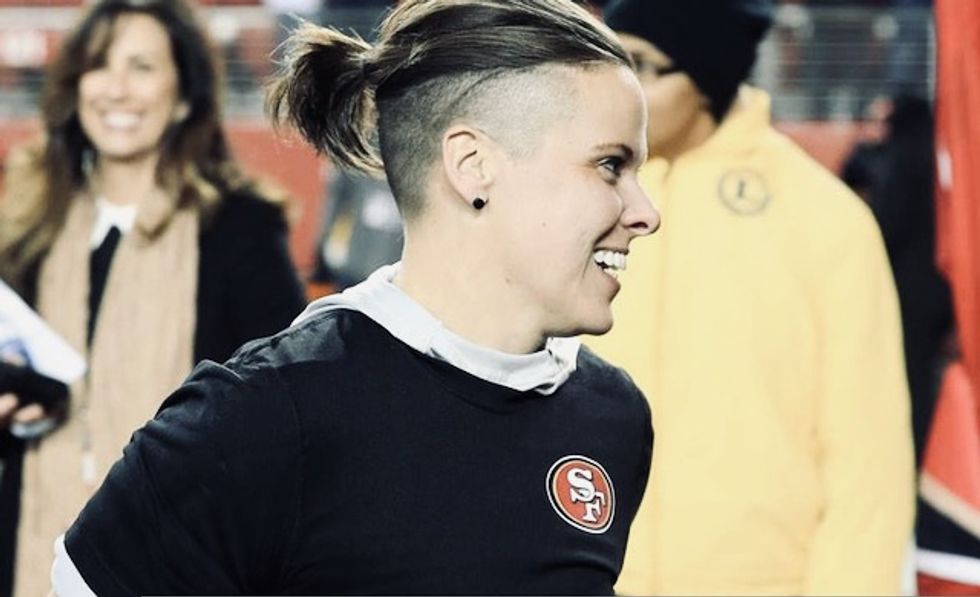 San Francisco 49ers offensive assistant Katie Sowers will make history on Sunday when she becomes the first woman to coach in the Super Bowl.

But the 33-year-old, who is also openly gay, says the most important aspect of her trailblazing road to Miami is to make sure that she is not merely a one-off.

"Being the first female in the Super Bowl, it's surreal," Sowers said. "It really is.

"But even though I'm the first, the most important thing is I'm not the last. We have to continue to grow.

"I will know we are successful when it's not a headline any more."

Sowers arrived in the NFL in 2016 when she worked as an intern with the Atlanta Falcons, where current 49ers coach Kyle Shanahan worked as offensive co-ordinator.

She followed Shanahan to San Francisco in 2017, working as a seasonal offensive assistant before being promoted to a full-time role last year.

Sowers has been a life-long gridiron fan, first playing as an eight-year-old before going on to play in the Women's Football Alliance for the West Michigan Mayhem and Kansas City Titans.

She also represented the United States national team during her playing days before embarking on a coaching career.

Her duties vary, but she often works drills with the 49ers receiving corps and skill players.

"She's tremendous," 49ers quarterback Jimmy Garoppolo said this week. "What she does with the receivers, all the skill position guys, how she interacts with them, it's special. And she's feisty, man. She'll get after guys if she has to. It's fun to be around."

Those sentiments are echoed by Niners coach Shanahan, who recalls a moment when he worked with Sowers in Atlanta when he knew that her gender would not be an issue.

Another assistant coach swore during a team meeting, and promptly apologized to Sowers. Sowers' response was simple: "Why would you say sorry?"

"We started to realize, that's what made it work," Shanahan said.

"We could all be ourselves. It didn't matter that a girl was in there, or a guy. She was just another intern trying to get a job. Katie made everyone so comfortable in that way, I never even thought about it."

Since her appointment, Sowers has helped a youthful group of 49ers wide receivers to flourish.

Kendrick Bourne, who led all 49ers during the regular season with five touchdowns, credits Sowers with helping him establish his NFL career.

Bourne recalls how Sowers helped settle his nerves as an undrafted rookie in 2017 as he attempted to gain a place on the 49ers roster.

"She calmed me down after I had like two drops in my first pre-season game," Bourne said.

"She told me to just live in the moment and not get too excited about anything, and to just stay the same. I had a good game, a real good game, and ended up making the team."

Veteran wide receiver Emmanuel Sanders, who could win a second Super Bowl on Sunday, said Sowers' gender has never been an issue.

"It's amazing what Katie's doing," Sanders said. "I get a lot of questions you know like 'How do you feel about a woman coach?' And I honestly don't know how to answer those questions.

"Because, to me, Katie's just one of the coaches. I don't put too much emphasis on her being a female coach. I don't treat her any differently to anybody."