Has nothing been learned since 2003? Corporate media welcome back Iraq war hawks to make case for Iran 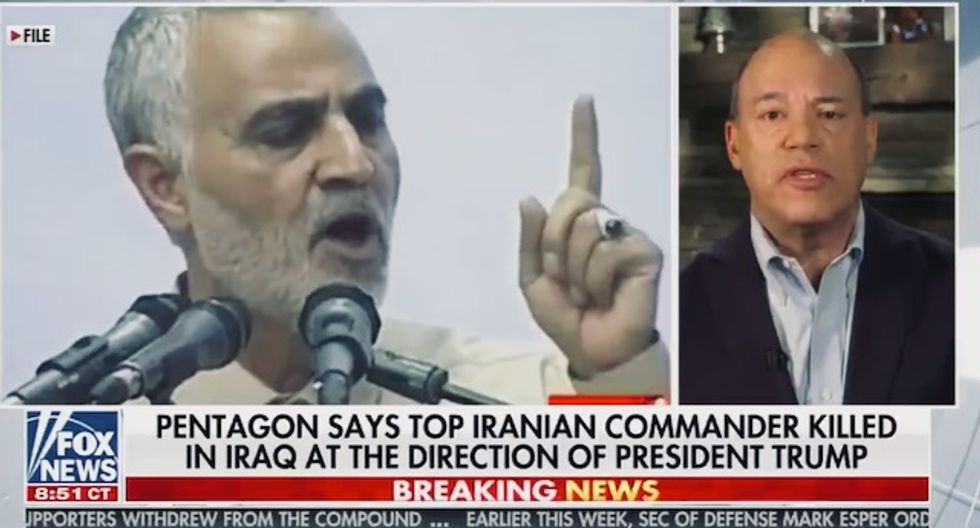 "No voices calling for peace. No voices critical of empire. Just establishment media and current and former Pentagon officials who feed off the trillion dollar war machine."

As President Donald Trump spent the early days of 2020 instigating and then backing down from a potentially catastrophic confrontation with Iran, corporate media in the U.S. turned to the very same people who promoted the country's worst foreign policy disaster in a generation to advocate for repeating the mistakes of two decades ago.

The decision of networks and cable news outlets like CNN, MSNBC, and Fox News to bring on a stream of past advocates for and architects of the 2003 invasion of Iraq was panned by progressives who watched in horror and frustration as the same arguments were deployed in service of all-out war with Iran.

"It's War Inc. all over again," tweeted The Nation's Dave Zirin.

Trump's ordered assassination of Iranian military commander Qasem Soleimani on January 3 proved the catalyst for escalated tensions between the U.S. and Iran. It also opened the door for news outlets to welcome back some of the key Bush-era war cheerleaders.

"In a sane and just society, the architects of the nearly 17-year-old war in Iraq—which is still ongoing and has left an estimated half-million people dead—would face war crimes charges and those who cheered them on would be thoroughly discredited."

"The Trump administration's sudden, violent confrontation with Iran stands in contrast to the methodical march to war with Iraq under George W. Bush and his neoconservative cabinet in 2003," Dickinson wrote. "But the rhetoric around the two conflicts has been strikingly similar—as has the reliance on 'razor thin' evidence of an imminent threat to establish a cause for war."

Soleimani's death by drone strike was celebrated in real time by former Bush press secretary Ari Fleischer, who spent the run-up to the Iraq War selling the public on the necessity of the conflict.

"I think it is entirely possible that this is going to be a catalyst inside Iran where the people celebrate this killing of Soleimani," Fleischer told Fox in the hours after Soleimani's killing, flanked by Bush administration advisor Karl Rove.

Ari Fleischer: "I think it is entirely possible that this is going to be a catalyst inside Iran where the people ce… https://t.co/saCECt1VWU
— Jason Campbell (@Jason Campbell) 1578020173.0

In contrast to Fleischer's prediction, Soleimani's funeral and remembrance ceremonies over the weekend turned out mourners enraged at the assassination across Iran in the millions. Former Vice President Dick Cheney's similar claim in 2002 that U.S. troops in Iraq would be "welcomed as liberators" was equally true.

Fleischer was nonetheless welcomed back to Fox on Tuesday and Wednesday to give his thoughts on the conflict and attack Democrats for questioning the rush to war.

"It's concerning, to say the least, to see some of the biggest backers of the Iraq War—an abject failure that, coupled with the ongoing war in Afghanistan, has cost the United States trillions of dollars and thousands of lives—are publicly (and in some instances, gleefully) opining about the potential impact of war with Iran, in some cases even using the same rhetorical stylings to do so," said Vox's Jane Coaston of the similarity in rhetoric.

On MSNBC, which bills itself as a liberal alternative to right-wing behemoth Fox, host Ari Melber on January 7 in the wake of Iranian retaliation for the assassination spoke to former General Barry McCaffrey, who called for a devastating response against Iran.

"Our only good response at this point is an overwhelming dominance of air and naval power that can be employed against the Iranian homeland," said McCaffrey.

"Liberal" MSNBC guest Gen. McCaffery: "Our only good response at this point is an overwhelming dominance of air and… https://t.co/sPBK2L9fNa
— Andrew Lawrence (@Andrew Lawrence) 1578442020.0

Unmentioned in the segment was McCaffrey's position on the board of Raytheon, a major U.S. weapons suppplier.

The next day, Melber hosted former Sen. Joe Lieberman, a one-time Democrat whose embrace of the Bush administration's push for war across the Middle East led to an unofficial expulsion from the Democratic Party in 2006, though Lieberman was re-elected as an independent.

Left unmentioned by Melber? The fact that Lieberman works for Israel Aerospace Industries, a defense company with $1 billion in sales in the U.S.

Melber did not respond to a request for comment at press time.

As Popular Information's Judd Legum reported Thursday morning, Lieberman and McCaffrey are hardly alone in advocating for war in the media without disclosing their financial interests in the conflict. Legum lists nine former government officials with ties to the defense industry who are being presented to the American people as experts without noting their connections to the military industrial complex.

One of the people profiled by Legum is Michael Chertoff, the former Bush-era secretary of Homeland Security. On CNN, Chertoff claimed Trump has unilateral power to attack Iran and start a war.

But, Legum pointed out, there was some context for those remarks left unmentioned:

Neither Chertoff nor CNN disclosed that Chertoff is chairman of the board of the American subsidiary of BAE Systems, the fourth largest weapons manufacturer in the world.

Print media was not immune to the lack of disclosure. On January 5, the Washington Post ran a piece by former Bush administration national security advisor Stephen Hadley saluting the assassination of Soleimani and calling for war if necessary.

That Hadley is on the board of Raytheon alongside MSNBC's McCaffrey did not receive a mention.

The onus on disclosure, wrote Eyes on the Ties reporter Rob Galbraith, is on the Post's editor Fred Hiatt:

Running another hawkish column by Hadley without noting his enormous financial incentive to stoke the engines of war shows that the Post in general, and Hiatt in particular, has failed to learn anything from Syria, Iraq, or any of the other times that war profiteers have used their pages to clamor for missile strikes and invasions. This is made all the more egregious since, however dismissively, Hiatt acknowledged Hadley’s conflict of interest in 2013, and yet still went ahead and printed his op-ed today without disclosing this conflict—again.

"It's not 2003, but it sure feels like it," wrote HuffPost's Jessica Schulberg in a piece detailing a number of the Bush administration officials and varied Iraq War boosters brought on by the corporate media to discuss the push for war.

"In a sane and just society, the architects of the nearly 17-year-old war in Iraq—which is still ongoing and has left an estimated half-million people dead—would face war crimes charges and those who cheered them on would be thoroughly discredited," Schulberg continued. "Instead, they are the 'experts' praising President Donald Trump's decision to assassinate top Iranian military commander Gen. Qasem Soleimani and offering the public insight on the way forward with Iran."