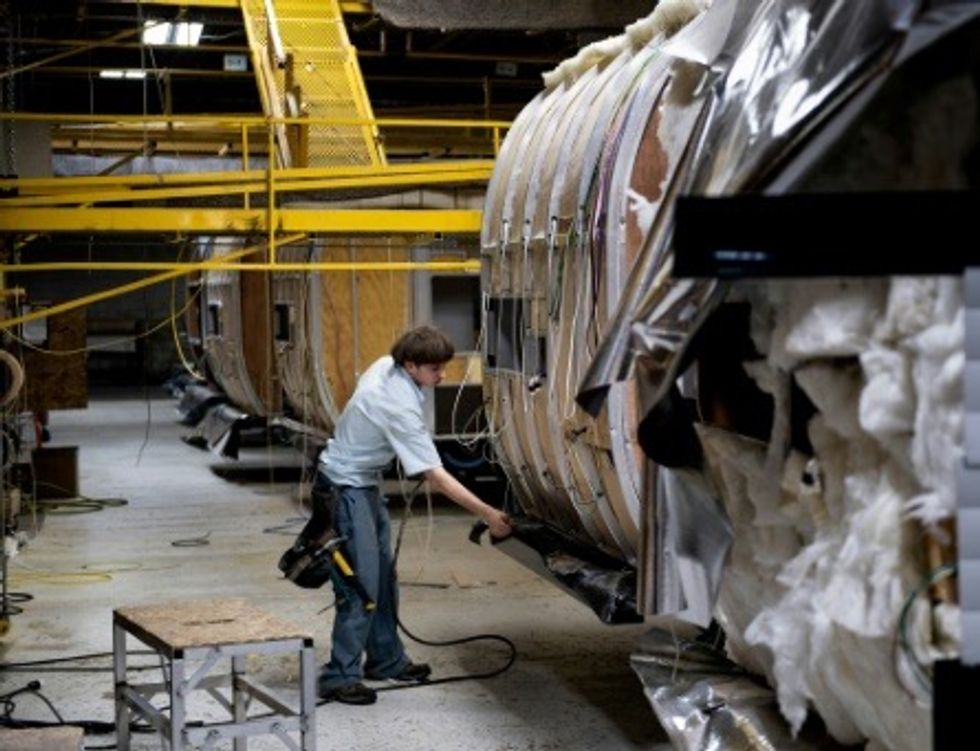 The six or seven vehicles that come off the assembly line each day at Riverside plant in Indiana's Amish country look more like houses than cars, with workers installing wooden roofs and fiberglass insulation before applying coats of gleaming white paint.

For decades, recreational vehicles have been icons of the American road: homes-on-the-go furnished with beds, showers, kitchens and even television dens that offer families the freedom to roam and see the vast country.

In an election year, RVs tell an additional story. Experts consider them bellwethers of the economy, dream-buys for Americans who only shell out the tens of thousands of dollars when they feel comfortable.

As the election season opens, a team from AFP traveled (albeit not by RV) from Washington to Iowa, which holds the first presidential nomination contest on February 3, in hopes of feeling the economic and political pulse of the country.

In the northeastern patch of Indiana centered around Elkhart, the verdict from the RV industry appeared to be that the economy -- a key factor in whether President Donald Trump is re-elected -- seems strong, although a notch less than recently.

"A lot of people think that RVs are an economic indicator and in many ways it is, because a recreational vehicle is not a have-to-have, it's a want-to-have," said Don Clark, CEO of Grand Design, a maker of high-end RVs started in 2012.

Clark said that tariffs, imposed by Trump on steel, aluminum and other materials crucial for manufacturing, have "had an impact" and been an "inconvenience," but the industry nonetheless was braced for its fourth biggest year on record.

At the RV Hall of Fame museum, whose displays include a 1913 Model-T with a convertible dining table described as the first recreational vehicle, veteran industry watcher Sherman Goldenberg said he expects a dip of six percent in shipments in 2019 from the previous year.

The industry has climbed since the aftermath of the Great Recession in the late 2000s, and "after an eight-year run of growth, at some point it planed out, as all things do," said Goldenberg, publisher of industry magazine RVBusiness.

He said that younger people -- who have coined terms such as "glamping" for high-end camping -- have helped revitalize an industry dominated by older people.

Goldenberg, who estimated shipments of around 400,000 RVs in 2019, said one factor was manufacturers slowing down to keep pace with supply after making more RVs than could be sold in previous years.

Eric Sims, an economist at the University of Notre Dame in nearby South Bend, said that past overproduction was an issue -- but may be exaggerated by the industry.

"There's some of that going on, but I think that there is also a general slowing of demand for these kinds of vehicles in the economy," Sims said.

"I would characterize the RV industry as still doing well," he said. "Relative to where things were three or four years ago, things have cooled off a little."

Production at the RV factories often begins before dawn to accommodate the farming schedule of the Amish, who make up much of the workforce even though they cannot drive motorized vehicles themselves.

Men sporting suspenders and beards, and women wearing plain dresses and white "kapp" headpieces, punched out their shifts using time clocks before some left on bicycle.

Mervin Lehman, general manager at Riverside, where up to 80 percent of labor is Amish, said that the workers delighted the company.

"The ethic of coming to work every day, good workmanship, that kind of culture, is what they bring," he said.

"On the flipside, it's a very good, lucrative paying job. With an eighth-grade education, there is nowhere else you can go to earn the money that this community can," he said, referring to the Amish custom of ending school at the start of their teenage years.

While the Amish are forbidden from buying RVs, for other Americans, the main question is cost.

Keith Hess of Wisconsin, visiting the RV Hall of Fame with his wife of 38 years, said he expected to be able to buy a long-sought $100,000 unit in five years.

"We would like to take a month or two to travel the West Coast to Alaska, just being able to be self-sufficient as you travel, to stop and have a meal or to pull off and use the bathroom," he said.

"We are very fortunate in North America that we can drive to a lot of places," he said. "You can see a lot of beautiful sites that God has created for us."