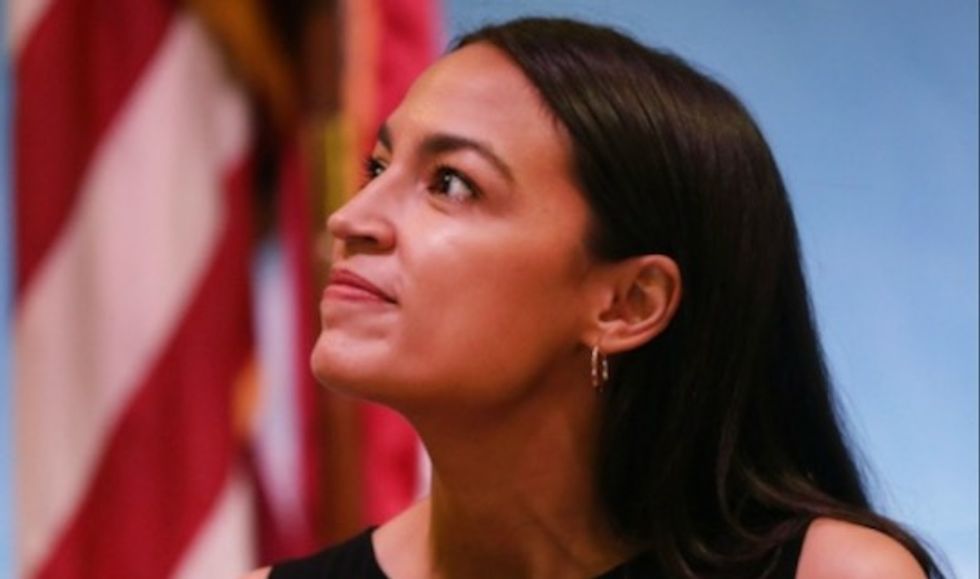 Rep. Alexandria Ocasio-Cortez holds an immigration Town Hall In Queens on July 20, 2019 in New York City. Ocasio-Cortez (D-N.Y.) and the three other progressive freshmen in the House have become the focus of attacks from Donald Trump in recent days. (Photo: Spencer Platt/Getty Images)

Congresswoman from New York withholds dues from the party machine and launches a new PAC to help insurgent left-wing candidates.

For bucking a key arm of the Democratic Party establishment that has stood in the way of attracting and supporting progressive candidates, Rep. Alexandria Ocasio-Cortez (D-NY) received applause over the weekend after she announced the launch of a new political action committee designed to directly challenge the power of the Democratic Congressional Campaign Committee by helping insurgent, left-leaning challengers like herself take on both Republican incumbents and centrist Democrats.

"The rumors are true," Ocasio-Cortez tweeted Saturday. "Today we're announcing the Courage to Change PAC—and we need your help.  We are pushing the envelope in D.C. by rewarding those who reject lobbyist money, fight for working families, and welcome newcomers."

"What we're looking to do is to make sure that progressive candidates and incumbents have the support that they need to back policies that are going to improve the lives of everyday Americans."

When community leaders, activists, and working-class candidates try to run for office, organizations like the DCCC discourage them. These potential progressive leaders are asked: "Can you raise $300,000 from your friends and family? If not, don't bother trying."

We're stuck in this situation because there has been a structural effort to keep people like Alexandria, and people like you, out of power. But today, that changes.

HuffPost's Daniel Marans, the first to report on the new PAC, noted:

Ocasio-Cortez is taking steps to mount an independent political operation capable of rivaling the establishment party organs with which she has jousted. The mere creation of a PAC to support other candidates ― an entity commonly known as a "leadership PAC" ― is typically the type of endeavor limited to members of party leadership or other seasoned members of Congress.

The PAC expands her reach in more tangible ways as well. A PAC allows her to contribute a larger figure to candidates than she otherwise would be able to give. Candidates can give only up to $2,000 a year from their own campaign to another candidate per election cycle, but PACs can contribute up to $5,000 per election cycle. Since the primary and the general elections are considered separate cycles, she can transfer $10,000 to a candidate from the start of a primary to the close of a general election.

The move by the first-term congresswoman, a project rumored to be underway for months, is a bold challenge to the DCCC which angered many progressive lawmakers and activists when it announced last year a blacklist effort against campaign consulting firms and others who worked against its preferred candidates.  In addition to launching the new PAC, Ocasio-Cortez is also withholding her annual $250,000 dues to the DCCC and explained why in a Friday afternoon tweet:

In an interview with Fox News, Ocasio-Cortez further defended her decision by saying, "I don't see the sense in giving a quarter-million dollars to an organization that has clearly told people like me that we're not welcome."

AOC's efforts to stand up the DCCC was championed by many of her fellow progressives:

The Washington Post reported Sunday afternoon that Courage to Change had raised more than $150,000 after approximately 24 hours of fundraising, money that would go directly to help progressive House candidates in the 2020 primaries and general election.

"There is a robust infrastructure set up to maintain and defend the Democratic majority, and to support moderate Democrats, and often that infrastructure is running against progressive in blue districts," Corbin Trent, a former staffer for Ocasio-Cortez and now a spokesperson for the new PAC, told the Post. "So what we're looking to do is to make sure that progressive candidates and incumbents have the support that they need to back policies that are going to improve the lives of everyday Americans."

In a tweet on Sunday, Ocasio-Cortez said, "Thank you to everyone contributing to this effort so far—this is a big deal.  Help us build a war chest to support progressive red-to-blue seats, bold incumbents, and newcomers to Congress alike."