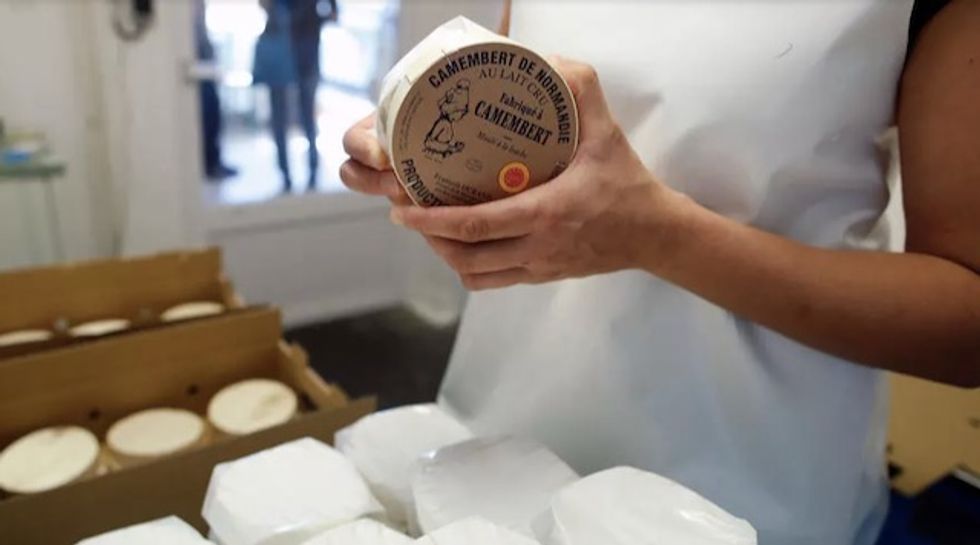 A battle over the future of camembert came to a head Friday after French producers voted against allowing pasteurised versions of the classic raw-milk cheese.

A narrow majority of northern French cheese-makers -- 53 percent -- rejected a plan that would have given industrial producers the right to use the exclusive "Camembert of Normandy" label, even when using modern techniques denounced by purists.

Producers rejected the enlarged AOP (Protected Designation of Origin), Patrick Mercier, president of an association that had been pushing for the changes said in a statement.

Veronique Richez-Lerouge, a staunch opponent of the plan who heads the "Fromages de Terroirs" association, hailed Friday's vote as "very good news for all European AOPs."

"The principle of quality won out over the increased demands of dairy giants, it's a victory for taste," she said.

Agrifood giants like Lactalis, makers of the top-selling President brand, can call their creamy disks camembert.

Crucially, however, they cannot use the tastier "Camembert de Normandie AOP" label.

Supporters said the compromise struck in 2018, which was rejected Friday, would have reversed decades of declining dairy farming in Normandy, where fewer than a dozen producers still make the cheese the traditional way.

AOP producers now make just 5,500 tons of camembert a year, compared to 60,000 tons of pasteurised cheese that costs half as much or less.

Mercier, one of just two producers who make raw-milk camembert from their own herd of native Normande cows, had backed the proposed changes, seeing it as a way to increase consumption of the more pungent produce.

It would have also forced dairy giants to adapt more savoury practices.

Firstly, they would have had to sharply increase the size of their Normande herds -- the more productive Holsteins currently predominate -- and ensure they mainly eat grass instead of packaged feed.

Meanwhile, producers of the cream of the crop, like Mercier, would have had the right to call their cheese "Authentic Camembert of Normandy," to distinguish their artisanal and more costly creations from industrial alternatives.

But critics cried foul, saying consumers could be confused by the two differing AOPs, the French badge of quality for locally produced delicacies.

France's AOP dairy board, the CNAOL, came out against the plan last spring, calling it an "unacceptable homogenization" of a cheese whose flavor and texture change with the seasons.

The board's president Michel Lacoste said using "curd machines" and other techniques would make the cheese taste the same year round, no matter what type of milk was used.

"The whole point of AOP cheese is that is comes from milk that's alive, from a particular place, and the producer has to adapt to make it," he said.

Camembert is said to have been created in 1791 when Marie Harel, who lived in the village of Camembert, adapted a recipe for brie she learned from a priest hiding out during the French Revolution.

In 1982, the government introduced rules for its production -- including at least five scoops of curd in a round 11-centimetre mould and at least three weeks of ageing to promote the snowy growth of Penicillium camemberti mould for the rind.

But crucially, officials failed to specify that less stringent versions could not use the camembert name, allowing them somewhat confusingly to tout their blander varieties as being "Made in Normandy".

Pro Publica
Beyond developing their camping skills, participating in a food drive to aid the hungry and donating pajamas for seniors, Girl Scouts across America this year were offered a new way to earn a special uniform patch: learning about the wonders of 5G cellphone technology and, in some cases, promoting it.

The opportunity came courtesy of Ericsson, the Swedish telecommunications giant, which sponsored the “Ericsson Limited Edition 5G & IoT” (Internet of Things) patch program. The program, still available on at least one Girl Scout website, targets all age levels, from Daisies (kindergarten-age Scouts) to Ambassadors (those in high school), with an array of activities intended to “introduce Girl Scouts to 5G and the Internet of Things.”

These include watching “Explaining 5G to Kids,” a five-minute video featuring Mats, a bearded Ericsson employee, as he chats with Siofra, Freya and two other squirming but charming children, who speak English with what sound like hints of Swedish accents. Mats explains that 5G is a “new technology for the mobile phone. So everything will be much better.” He explains that the technology could allow the kids’ toys to connect. “Wouldn’t that be cool?” he asks. “This is what Ericsson is doing,” Mats explains. “This is what 5G can do.”