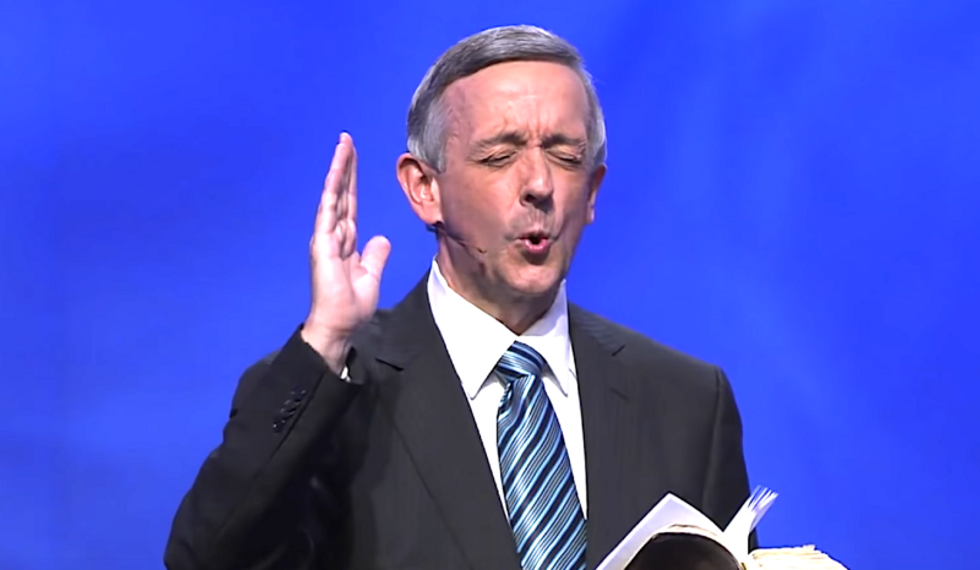 A 2004 book written by Dallas megachurch pastor and Trump spiritual adviser, Robert Jeffress, is getting some renewed attention for its promotion of the discredited "gay conversion therapy" thanks to a recent report from Media Matters.

In the book, Jeffress wrote about a high school senior named “Susan” who had just revealed to the world that she is gay. When Jeffress asked her how she thinks God feels about her sexuality, Susan replied that she now understands that God "created me with these desires, desires that I have had since I was a little girl."

“For years I have been miserable trying to deny those feelings and have seriously contemplated suicide," Susan continued. "But now that I have accepted who I am, I am happier than I have ever been in my life!"

But Jeffress saw no reason to celebrate Susan's newfound confidence in her sexuality, writing that “homosexual relationships are neither ‘normal’ nor ‘healthy'” and that gay activists are working “to cover over the darkest secret associated with this perversion: child molestation.”

“None of us gets a ‘pass’ from God for rebellious behavior just because it arises from our innate desires, regardless of the cause of those desires. But here is the good news: Through the power of Jesus Christ, all of us can be freed from acting on those desires,” he wrote, adding that it's wrong to assume that sexual orientation can be changed.

“I wish I could report that after hearing the above information, [Susan] renounced her homosexual tendencies, confessed her sin to God, and left my office with a newfound attraction to the opposite sex," Jeffress wrote. "She didn’t."

Jeffress has been a longtime proponent of conversion therapy, which Human Rights Watch says has been "rejected by every mainstream medical and mental health organization for decades."