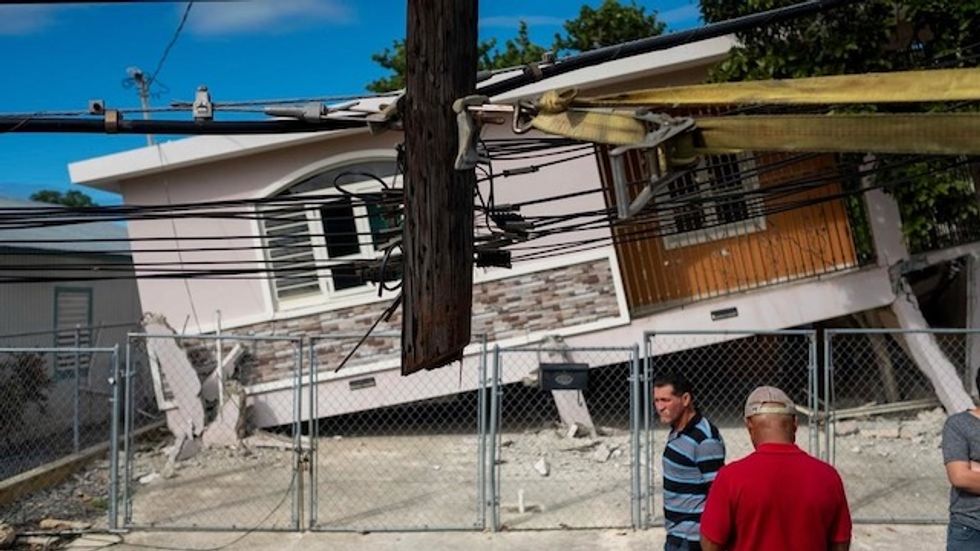 "Postponing the disbursement of this vital assistance any longer—in the face of the humanitarian needs of Puerto Rico—is simply shameful," the lawmakers said in a joint letter.

In an effort to put a stop to what they argue is the "illegal" and "unconscionable" withholding of necessary and vital aid to the people of Puerto Rico, New York Democratic Reps. Alexandria Ocasio-Cortez and Nydia Velázquez joined with Sen. Bernie Sanders on Monday in demanding President Donald Trump immediately transfer already approved federal disaster assistance to address the island territory's "urgent humanitarian needs" following  recent earthquakes and aftershocks.

In a letter (pdf) sent to the Trump administration, the lawmakers cited a nation still reeling from the destruction left by Hurricane Maria over two years ago and said there was no excuse to deny Puerto Ricans the help they so desperately need. The letter called on Trump to immediately approve a major disaster declaration submitted by the Puerto Rican government on January 12; to release aid money previously approved by Congress for humanitarian relief; and to direct FEMA to undertake an urgent response to the ongoing disaster.

"Let us be clear: Postponing the disbursement of this vital assistance any longer—in the face of the humanitarian needs of Puerto Rico—is simply shameful," the letter states.

The people of Puerto Rico have been battered by hurricanes and earthquakes. They need humanitarian assistance now.… https://t.co/I4aqDhTOgw
— Bernie Sanders (@Bernie Sanders) 1578952431.0

The new letter follows a similar effort last week by House Democrats who urged Trump to release more than $18 billion in aid that was approved for the island following the 2017 devastation caused by Maria.

"The hurricane devastated the island and today, tens of thousands of people are still living under tarp roofs," Velázquez, Ocasio-Cortez, and Sanders wrote in their new letter to Trump. "In recent days, the quakes have cost millions in damages, destroyed hundreds of homes, caused widespread electricity blackouts, and forced residents to resort to sleeping in roofless shelters due to the fear of being buried in their own homes by another earthquake."

by
Jon Queally, staff writer
Report typos and corrections to: corrections@rawstory.com.
Like this article ? Text `Support` to 50123 to donate.
READ COMMENTS - JOIN THE DISCUSSION