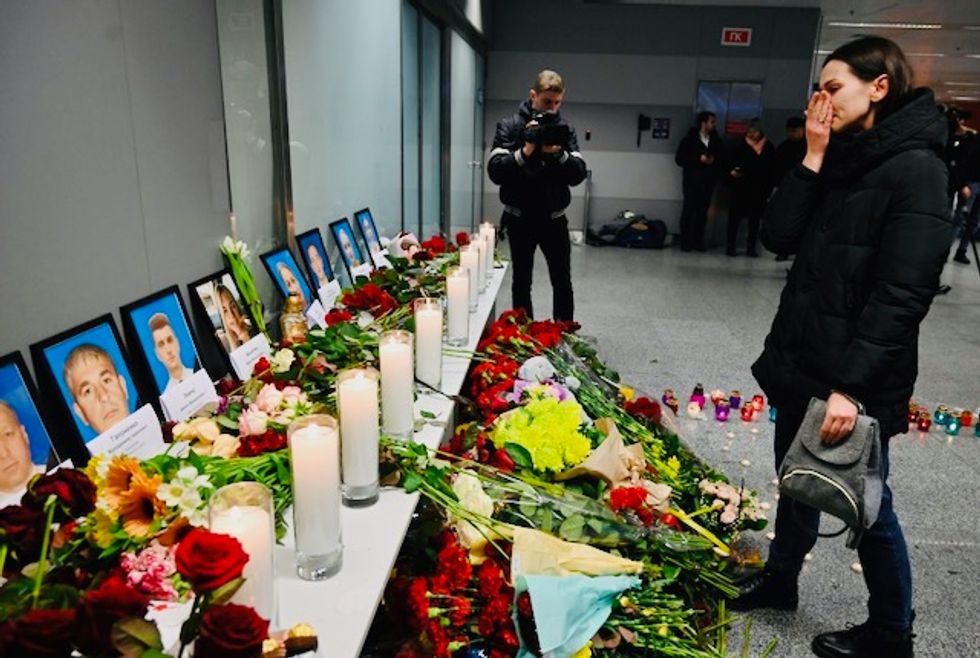 US President Donald Trump said Thursday he had "suspicions" about the crash of a Ukrainian airliner outside Tehran that killed all 176 people aboard, as US officials reported it had been mistakenly shot down by Iran.

Unnamed officials told US media that Iran fired two surface-to-air missiles at the aircraft as it took off on Wednesday morning, bringing it down in a blaze of flames before it exploded on the ground.

The US conclusion was reportedly based on satellite, radar and electronic data indicating a tragic error.

The disaster unfolded just hours after Tehran launched ballistic missiles at US military targets in Iraq to retaliate for the January 3 US drone strike in Baghdad that killed a top Iranian general.

Trump didn't directly confirm that conclusion, but strongly hinted at it.

"I have my suspicions," Trump said. "It was flying in a pretty rough neighborhood and somebody could have made a mistake."

"Some people say it was mechanical. I personally don't think that's even a question," Trump said, adding that "something very terrible happened."

But the Iranian government ruled out a missile strike, saying such a scenario made "no sense."

"Several internal and international flights were flying at the same time in Iranian airspace at the same altitude of 8,000 feet (2,440 meters)," Iran's transport ministry said.

"This story of a missile striking a plane cannot be correct at all," it said in a statement

AFP / Nicholas Kamm "Something terrible happened," US President Donald Trump said as evidence mounts that Iranian air defenses may have accidentally shot down a Urkainian airliner killing 176 aboard

Ukraine International Airlines Flight PS752 went down just minutes after takeoff from Tehran airport in the dark early Wednesday, with no radio message from the pilot to indicate distress, the Iranian Civil Aviation Organization said.

"According to eyewitnesses, a fire was seen on board the plane which grew in intensity," the organization added in an initial statement Wednesday.

British Prime Minister Boris Johnson called Thursday for a "full, credible and transparent" investigation into the crash, and Canada demanded that its own experts be allowed to join the probe.

Champagne told Zarif that "Canada and Canadians have many questions which will need to be answered."

Ukraine has already sent 45 crash investigators to Tehran to take part in the inquiry being led by the Iranian authorities.

They arrived in the Iranian capital on Thursday and aim to help analyze the black box recordings from the plane, Ukrainian President Volodymyr Zelensky said.

"We are calling on Ukraine's Western partners: If you have evidence to assist the inquiry, we call on you to provide it," the Ukraine presidency said in a statement.

At the UN, a Ukrainian minister called for "unconditional support" for its investigators.

Ali Abedzadeh, head of Iran's civil aviation organization and deputy transport minister, said Iran and Ukraine were in the process of "downloading information" from black boxes retrieved from the crash site.

"But if more specialized work is required to extract and analyze the data, we can do it in France or another country," he added.

Analysts pointed to pictures shared widely online of the wrecked fuselage of the aircraft showing multiple apparent puncture holes consistent with a rocket that detonated just outside the plane, blasting shrapnel into it.

The marks closely resembled those on the fuselage of Malaysian Airlines Flight MH17, which was shot down in 2014 over Eastern Ukraine by a Russian-designed surface-to-air missile during fighting between Russian-backed rebels and Ukraine government forces.

ISNA/AFP / Borna GHASSEMI A child's shoe found at the scene of a Ukrainian airliner that crashed shortly after take-off near Imam Khomeini airport in the Iranian capital, killing all 176 aboard

"I think this has a very good possibility of being accurate," John Goglia, a former US aviation safety expert on the National Transportation Safety Board, told AFP.

"Airplanes that have just taken off and have made a climb to 8,000 feet, that's entering the safest period of time in the flight. So even an engine failure at that altitude should not cause the type of event we've just observed," he said.

The Ukrainian airline crash brought back memories of another tragedy involving a US military error.

In 1988, an Iran Air flight was shot down over the Gulf by a surface-to-air missile fired from the US warship USS Vincennes.

All 290 people aboard, most of them Iranians, were killed, sparking outrage across the country.

The US Navy mistook the aircraft for an Iranian fighter jet.