'We need everyone in the streets': More than 180 events planned across US to protest Trump's march to war with Iran 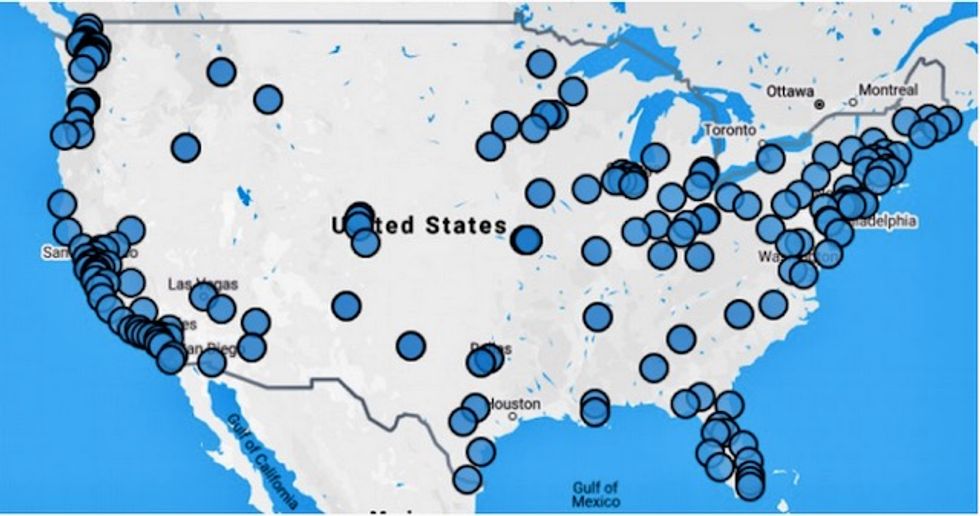 "We will not be forced into another war," said the coalition led by MoveOn, Indivisible, Win Without War, and other groups. (Photo: No War With Iran coalition)

"America, this is an emergency. If we spiral into war with Iran, millions could die. We have a short window of time to stop it. We need a massive protest."

After Iran's retaliation for the killing of Gen. Qasem Soleimani intensified fears of another catastrophic Middle East war, a coalition of progressive advocacy groups Tuesday reiterated their call for massive demonstrations across the U.S. to protest President Donald Trump's "military brinksmanship" and demand immediate de-escalation of tensions.

"We will not be forced into another war," said the coalition, led by MoveOn, Indivisible, Win Without War, and other groups. "On Thursday, January 9, at 5 p.m. local time, the anti-war majority in this country will get visible to oppose Trump's war and say #NoWarWithIran."

"In the wake of retaliation for Trump's warmongering, it's more important than ever to commit to showing up this Thursday to say #NoWarWithIran."

As of Wednesday morning, more than 180 demonstrations have been planned across the U.S.—up from just 50 when the protests were first announced Tuesday afternoon.

Iran's missile attacks on two U.S. airbases in Iraq—retaliation that was widely expected and promised by Iranian leaders—brought new urgency to the planned day of action, which will demand that Congress intervene to stop Trump from taking the advice of war-hungry right-wing pundits and launching a devastating war with Iran.

"America, this is an emergency," said activist Kai Newkirk. "If we spiral into war with Iran, millions could die. We have a short window of time to stop it. We need a massive protest. Everyone, if at all possible, must come out this Thursday, nationwide."

In the wake of retaliation for Trump's warmongering, it's more important than ever to commit to showing up this Thu… https://t.co/Q9WRwob9Ay
— Indivisible Guide (@Indivisible Guide) 1578440531.0

"We need everyone in the streets," tweeted Rep. Pramila Jayapal (D-Wash.), co-chair of the Congressional Progressive Caucus. "This is a critical time for the American people to be heard."

In a statement Tuesday night, Indivisible national policy director Angel Padilla said the missile attack by Iran was an "entirely predictable" and "avoidable" consequence of the White House's hawkish policies toward Iran and urged Congress "act decisively and fast to stop Trump's warmongering."

"Every day we wait is a message from Congress to Trump to continue his march to war," said Padilla. "We urge the House to immediately pass a strong war powers resolution, as well as the bills offered by Reps. Ro Khanna (D-Calif.) and Barbara Lee (D-Calif.) that would prevent war with Iran, and urge the Senate to take those critical measures up immediately upon passage."

"The anti-war majority of Americans will be paying close attention to what their members of Congress do," added Padilla, "not what they say."