Does Donald Trump have a secret police force waiting in the wings? 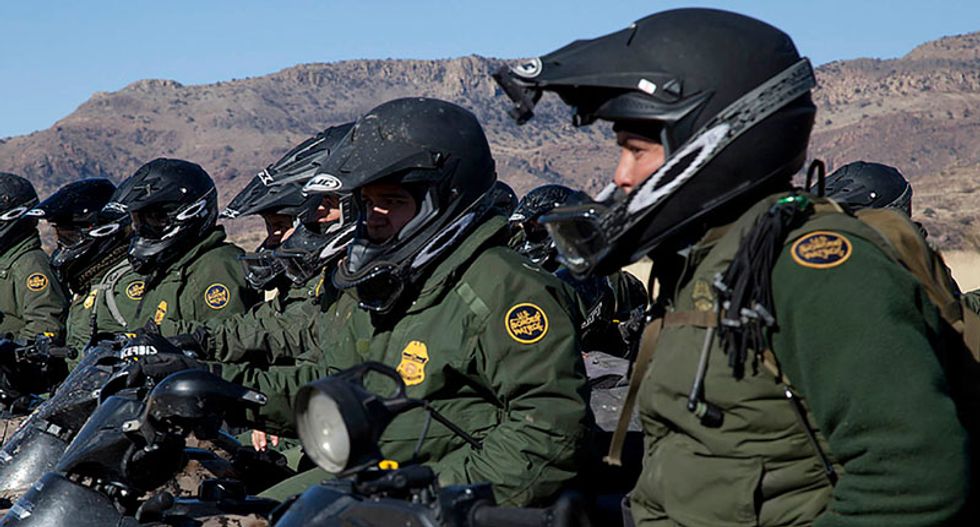 A long time ago, before September 11, 2001, the right-most flank of the Republican Party tolerated the establishment’s compromise with racial liberalism, by which I mean “the basic consensus that existed across the mainstream of both political parties since the 1970s, to the effect that, first, bigotry of any overt sort would not be tolerated, but second, that what was intolerable was only overt bigotry—in other words, white people’s definition of racism.” (I’m using here Nils Gilman’s helpful definition.)

After 9/11, that basic consensus began to break down. The GOP’s right-most flank refused to recognize its political legitimacy, even though it was white-centered. They refused, because they believed the basic consensus on race, and on other areas of political difference, permitted “radical Islamic terrorists” to attack God’s country. The Republican elites were no longer partners to be tolerated. They were now the enemy.

While the rest of America focused on terrorism, the disastrous occupation of Iraq and the endless “war on terror,” the right-most flank of the Republican Party focused on “illegal immigration.” This is not as random as it appears. Brown people threatened America’s covenant with God. Brown people were “breaching” the southern border. That these brown people were worlds apart was a distinction with zero difference.

The Republican establishment, by which I mean people wielding real power, did not realize how diametrical the GOP’s right-most flank had become until after 2004. George W. Bush won reelection in part using this strategy—scare the bejesus out of everyone. The liberals were coming for your guns. The gays and feminists were coming for your sons and daughters. The heathens and atheists were for coming for your God. After the election, Bush thought he had political capital to burn. Then things changed.

The cause of change was partly Bush’s failure in Iraq. But failing was not what most polarized the right-most flank of the Republican Party. What most polarized them was President Bush stoking their white rage and then turning around to try privatizing Social Security and reforming federal immigration law. To put it one way, they wanted freedom and “entitlements,” but only for them. Put quite another way, the government was trying to “take away their money” and “give it to the illegals.” After 2007, when both reform attempts failed, Bush was a lame duck. The GOP became something else.

We didn’t know what it would become until after the 2008 election. And even then, racial liberalism still prevailed. No one, not even the GOP’s right-most flank, dared use explicit language with respect to Barack Obama commonplace in public discourse prior to 1970. )John McCain in 2008 and Mitt Romney in 2012 were committed to racial liberalism.) But the upward pressure was building. Obama’s victory, according to Arthur Goldwag (a subscriber to this newsletter!), brought “hidden feelings to light”:

Viral, Photoshopped images of President Obama in an African witch doctor’s getup, of Mrs. Obama with her face morphed into an ape’s, of watermelons growing on the White House lawn, and of the president and first lady dressed like a pimp and a prostitute have been popping up in in-boxes everything—some of them sent by political activists who would describe themselves as conservative and mainstream.

The party’s margins were taking over the party’s center. By 2010, the GOP’s right-most flank had a name, the Tea Party. By 2015, the seal broke entirely when a candidate referred to Mexicans as rapists, and called for a total ban on Muslims entering the country. Now, after more than three years of sadistic policies aimed at purging the body politic of brownness, all that remains of the “racial liberalism” is ceremonial lip-service, as when Donald Trump is forced to say something nice. Otherwise, there’s no more consensus. There’s no more conservatism. Only leftism, liberalism and fascism.

Sept. 11 had two other outcomes—the militarization of civil society and the over-criminalization of minor crimes. “Illegal entry” is a misdemeanor (the first time), something as socially injurious as reckless driving. But a rapid evolution from the margins to the Tea Party to a fascist White House over 20 years has turned it into a crime threatening to destroy our values, economy and “way of life.” That’s what happens there’s no difference between brown immigrants and brown terrorists.

Under Donald Trump, the militarization of civil society is enmeshed with the over-criminalization of illegal entry. The administration decided to confiscate babies as a deterrent to unlawful border crossing. It created apparent “concentration camps” for immigrants and their families. Now, according to the Times, US Customs and Border Protection, or Border Patrol, is deploying 100 officers to so-called “sanctuary cities.”

The official goal is increasing deportations by 35 percent. But intimidation appears to be the real goal. Among agents, the Times said, are “members of the elite tactical unit known as BORTAC, which acts essentially as the SWAT team … With additional gear such as stun grenades and enhanced Special Forces-type training, including sniper certification, the officers typically conduct high-risk operations targeting individuals who are known to be violent, many of them with extensive criminal records.”

Before the Times broke the news, Jenn Budd, a former Border Patrol agent turned civil rights activist, reported a conversation she had with a former senior agency official:

They believe they are only accountable to … presidents like Trump. Border Patrol believes it is not required to answer to local police, FBI, CIA or any other law enforcement agency. They claim to be the “premiere” law enforcement agency, superior to all others. They say they will become a “national police force” to be used by a president to enforce laws even among citizens. (Italics are emphatically mine.)

None of this is getting the attention it deserves. Democracy dies in darkness.